by Nicole RupersburgNov 7, 2016Urban Innovator of the Week 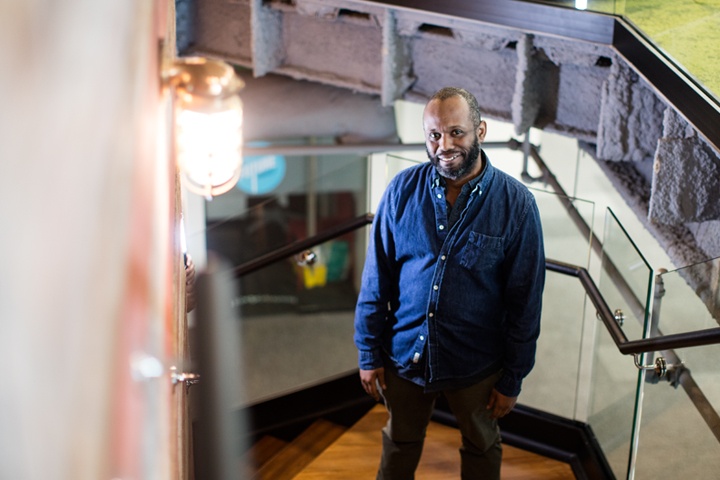 As a creative agency, Little Giant is a for-profit venture that works with a number of different high-profile brands and institutions to, Smith says, “help them speak to audiences they might not otherwise speak to.” Their work has included an event series for Heineken called the Heineken Green Room, targeting the youth of color market (ages 21-35) in Philadelphia and New York, as well as developing the first multicultural tourism campaign for the City of Philadelphia.

“A lot of the work we do on the for-profit side is specializing in cultural competency,” Smith says. This kind of work dovetailed nicely with their higher objective with Little Giant: their interest in social justice.

“The social justice direction of the company spoke to our passions,” he says. While Little Giant works with big names like Heineken, Adidas, and Red Bull, outside of the agency Smith is able to pursue social justice-oriented nonprofit interests, including the Institute of Hip-Hop Entrepreneurship.

Prior to Little Giant, Smith had worked in the music industry in A&R, managing and developing artists and DJs. Music and hip hop culture has always been an influencing factor in his life, so when he found himself in Chicago at artist Theaster Gates’s Place Lab two years ago brainstorming ideas on projects that would have an impact within the community, the idea for the Institute of Hip-Hop Entrepreneurship took root. He held onto this idea and developed it, eventually submitting it to the 2016 Knight Cities Challenge. It was named among the year’s winners.

The Institute of Hip-Hop Entrepreneurship aims to increase economic opportunity by using hip-hop to provide hands-on business training to members of low-income groups. Classes begin for the first cohort on November 12, and will involve nine months of training that includes one intensive weekend per month with other shorter exercises throughout the month.

“We want to account for people who are already working or have kids,” says Smith. “The tech scene and incubator concepts tend to be exclusionary concepts; it’s a tough schedule for people who might not come from a family of means. We wanted to be accommodating and adaptive to the community’s needs.”

They received 300 applicants for this first cohort, which they whittled down to 24. It is a competitive program with an extensive application process, but the selection criterion was not a matter of rewarding those who have already achieved the most. Smith says what they looked for most was a desire, a spirit of hustle, the ability to follow-through, and strong communication skills. Ultimately success with this program is not just what participants learn during the course of the program, but also what the relationships they form while there and a gaining new understanding of what entrepreneurship can mean for them.

“We want people to create a pathway to fiscal literacy and be able to be part of an ecosystem that lives beyond this cohort,” Smith says. “Hopefully we introduce them to a new way of thinking about working for a small business and giving them continued resources to start their own, showing them the pathway to careers and preventing them from being caught up in urban ills, lack of resources, or being marginalized. We want them to see that there are ways to independently create their own businesses.”

He also wants to highlight people who have already made the transition from the influence of hip-hop to sustainable careers to make the idea more viable to participants of the Institute of Hip-Hop Entrepreneurship and push it forward in the community, while also shining a light on the idea that “success” can be defined in multiple ways.

“I’m 45 now and I’ve witnessed a lot that sometimes the pathway to success might be longer than you expect,” he says.

Classes are held in the co-working space Pipeline Philly, another economic development endeavor co-founded by Smith that is designed to bring an exceptional workplace experience to entrepreneurs, start-ups, independent professionals, and small business teams in a prime location in Philadelphia’s Center City.

Smith’s next project is to launch a sister nonprofit to Little Giant called Creative Cities Lab, an equitable community development lab similar to Place Lab in Chicago. Creative Cities will convene 50-75 social entrepreneurs, activists, innovators, policy makers, real estate developers, and really anyone who is passionate about investing in cities to discuss equitable development by addressing the systemic factors that disproportionately affect minorities in America, including poverty, racism, and lack of resources. These meetings will bring together people from around the country and globe with track records of successfully addressing the economic challenges presented by inequitable urban development and focus on potential solutions for a more equitable future, which will include the development of fair and equitable pathways to education and home ownership.

This ongoing convening series will begin with a three-day conference in Philadelphia followed by smaller working groups in Oakland, Miami, Detroit and New Orleans. Smith is targeting the first activation for the second quarter of 2017.

While Smith may be involved with a number of different civic and cultural projects in addition to his marketing and branding work, ultimately they all inform each other and overlap to feed his greater mission of equity in education and economic development, all beginning with the concept of a creative agency that refocuses the contemporary lens on America’s rapidly-shifting demographics and multicultural identity.

“In general I like the concept of what Little Giant is and how these different verticals all speak to our holistic mission.”