by Nicole RupersburgSep 6, 2016Economy, Society, Urban Innovator of the Week 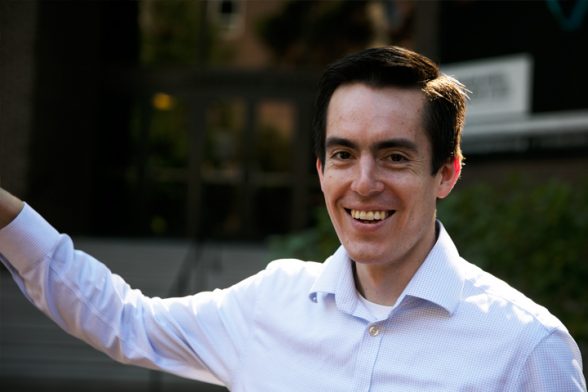 Gabriel Mandujano is the founder and CEO of Wash Cycle Laundry, based in Philadelphia with another located in Washington, D.C. He formed the triple-bottom-line company in 2010 after working as the Executive Director of the Enterprise Center Community Development Corporation, which works to cooperatively build communities in West Philadelphia, and the Center for Sustainable Transport in Mexico City.

When he was trying to figure out what he wanted to do next in life, he knew he was particularly interested in the social enterprise sector because of frustrations he felt in the nonprofit sector, and he also recognized the value in having access to tools nonprofits typically don’t have – tools that make a revenue-based model possible.

This was 2010, so the “green economy” wasn’t yet a fashionable idea, yet with his background in sustainable transport he knew he wanted to create jobs in that economy.

Ultimately he settled on the bicycle-delivery laundry service.

Located in the shadow of University City in Philadelphia, Wash Cycle Laundry is surrounded by dozens of anchor institutions, from universities to hospitals to research centers to cultural institutions.

“I wanted to do something in the industry that was relevant to these anchor institutions, something that they all need.” says Mandujano.

Wash Cycle Laundry is a commercial laundry service that merges Mandujano’s passions for job creation, economic development, and sustainable transport. It launched in August 2010 with three employees and one bike and trailer operating out of one laundromat in West Philadelphia, catering primarily to the residential sector.

“I was really big on doing something we could start doing from day one, and that was consumer laundry,” he explains, though they have largely moved away from that since then.

The focus now is on larger-scale corporate and institutional clients, working with everything from the US Customs Administration Center to hotels, salons, spas, and gyms.

“There’s a lot of people who need laundry!” he laughs.

Wash Cycle Laundry uses environmentally-friendly equipment and chemicals and transports all of the laundry via human pedal power. Delivery workers can carry up to 300 pounds of laundry on a bike trailer, ideal for short routes with multiple stops. Doing the same kind of delivery with a truck would be an enormous difficulty given traffic and parking challenges.

Mandujano says the bikes are very eco-friendly and are smart for the customers, but they also offer a great visibility for the company in addition to providing a significant cost advantage.

“We’re very pragmatic about it,” he says. “We do it because, yes, we love bikes, but we can defend it from any number of angles.”

But the real core of the company’s mission is around creating jobs for vulnerable adults.

“Over half of our employees are considered ‘hard to employee,'” says Mandujano.

One-quarter of the company’s employees are formerly incarcerated persons, and Wash Cycle Laundry has a strong track record of maintaining and promoting these workers. Others have experienced homelessness, drug addiction, or welfare dependence. Wash Cycle Laundry can be a competitive laundry provider, Mandujano says, while also serving as a stepping-stone for people reentering the job market.

Philadelphia Works is one of their core partners on the workforce development end, with smaller, more private nonprofits also providing support. In D.C., most of their employees are hired through Back on My Feet, which works with people currently and formerly homeless.

Their nonprofit partners are a huge part of the hiring process. “Any research on the subject talks about how poor interviews are for selecting people for jobs,” says Mandujano. “A lot of the things that come up in the interview process aren’t relevant for entry-level success in an operation like laundry. Whether or not someone is good at responding to semi-structured, arbitrary questions isn’t necessarily a good indicator of their work ethic.”

Wash Cycle Laundry relies heavily on their relationships with their hiring partners who know the type of work and jobs they offer, and who also know the types of people who have the best success there and can make more intelligent recommendations based on that.

“They spend more time with those people, so they can make good referrals and we can then select from a smaller pool.”

All but one of the 50 people currently on staff at Wash Cycle Laundry started out folding or delivering laundry or answering telephones, and all of those in supervisory positions were promoted from the front line.

“I originally thought people would stay one or two years then move on,” Mandujano says. “We found a lot of our star performers are comfortable here and we haven’t seen as much turnover as we expected. I’ve been surprised by the number of people who have built careers instead of using this as a stepping stone.”

The biggest focus in on building supervisory and management skills.

“Those are the most transferrable skills,” Mandujano explains. “Service, hospitality, and retail: those are the types of industries where there are the greatest number of accessible jobs for people without a degree. There really aren’t that many industry credentials you can get that make you more employable. What I find is what helps people stand out in a stack of resumes is showing experience: Have you managed people? Have you managed profits and losses?

‘We see a lot of people who are extremely hard-working and reliable who end up bouncing between essentially the same jobs – a cashier here and a cashier there – and the reason isn’t because they’re not showing up on time or working hard, but that they never really get the chance to get experience in people management and budget management, skills that are transferrable in this sort of economy. We promote people to those roles with those kinds of responsibilities that signal to other employers on the next rung of the employment ladder.”