by Nicole RupersburgJul 26, 2016Economy, Society, Urban Innovator of the Week 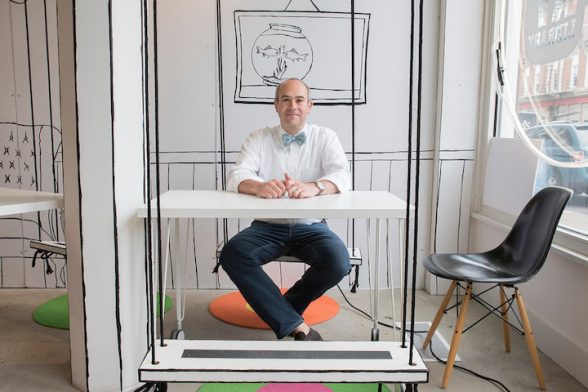 Eric Avner has managed the community development programs for the Cincinnati-based Haile Foundation since 2008.

During that time, he says, the Haile Foundation did “the normal foundation things” – funding philanthropic programs, as foundations do. But then they started looking at grants a little differently.

“We started asking ourselves a few questions in light of the changing world of philanthropy beyond just funding, including corporate social efforts, the impact of Kickstarter, the ALS Ice Bucket Challenge,” Avner recounts. “All these things are turning into a new type of philanthropy. Looking around we asked ourselves, ‘Can we be doing something different in philanthropy to empower people in this city to do something?'”

The answer was yes, and that was the beginning of People’s Liberty.

People’s Liberty is a “philanthropic lab” that invests directly in individuals through funding and mentorship, a unique strategy in the philanthropic world that bucks traditional grant making strategies (and the grantees that traditionally benefit from them) by giving the power directly to the people.

It is worth reciting directly from the People’s Liberty website in full what it does not fund:

Sounds a little cheeky, right? Maybe it even drew a small gasp from readers who work in the foundation world and are familiar with how the official public tone tends to be overwhelmingly positive and uncritical, where every idea is a good idea that deserves be supported and nurtured.

But has yarn-bombing ever really changed a city or empowered a people? Does all of the endless think-tank talking lead to any actual doing?

People’s Liberty was designed as a five-year experiment to see how philanthropy can be done differently…possibly even more effectively. They didn’t want something permanent; they wanted it to have a timeline with a sense of urgency.

“Building this as a separate brand from the foundation gives us ability to be more experimental, to have a slightly cheekier tone, a different pace, a different way of using tech and design,” Avner explains. “All of these things, whether storytelling or design or metrics or outreach or work culture, will ultimately make us better grant makers. It also sets the tone for how to reach people in ways that are more authentic without seeming stuffy, but do it in a different way than foundations typically operate.”

He outlines the questions they seek to answer with this experiment: “Could we give grants to an individual or groups of individuals and see if they’re able to make a difference in their communities? What kind of grant strategy would that be? Could that extend our placemaking in ways that other foundations don’t do? Can we leverage our philanthropy in a way that empowers a cadre of future civic doers?”

As a private family foundation not beholden to shareholders, the Haile Foundation has a bit more autonomy to conduct such an experiment.

They took 18 months to develop and build out this new philanthropic lab, which included renovating a space in a building across the street from the Findlay Market in the fast-transforming Over-the-Rhine neighborhood that includes administrative space for People’s Liberty as well as an additional 800 square feet of store frontage for installation projects.

People’s Liberty officially opened in March 2015, at which point they had fully developed all of their custom software systems and grant programs.

“When we launched we were ready to go and hit the street running,” says Avner. “The day we unveiled it everything was already built out. That was unusual because we built it so quietly.”

The People’s Liberty programs include Project Grants, Globe Grants, the Haile Fellowship, and the Society of Mad Philanthropists Residency.

With the Society of Mad Philanthropists Residency, People’s Liberty invites nine early-career designers and writers to work for them, and get paid, full-time for three months. Unlike their other programs, this one is age-specific – they want to give young creatives just starting their careers an opportunity to do real work and get paid for it – but not region-specific, so it is not just limited to people who live in Greater Cincinnati.

Their other programs are all geographically limited to inside the I-275 beltway, which completely encompasses the city of Cincinnati as well as parts of Northern Kentucky and a small corner of Indiana, and are not age-specific.

“That was one thing my boss said to me: ‘You cannot create a clubhouse for hipsters,'” Avner laughs.

For their Project Grants, they wanted the projects to be things that people could do in their spare time. Sixteen individuals each year are awarded $10,000 to implement an innovative community development project – “Big enough for people to take it seriously but not so big it requires them to quit their jobs,” Avner says of the grant amount.

“We want something that impacts their community or their neighborhood or block; something that is easily replicable, people can learn from it, and they can accomplish it with $10,000 and six months.”

With the Globe Grants, three individuals each year are given the keys to their Findlay Market storefront to create provocative installations that engage the whole neighborhood.

“It personalizes our own space,” Avner says. “It’s constantly changing and gives people a visual cue of what we’re trying to accomplish here.”

Their biggest program, though, is the Haile Fellowship. Avner refers to it as a “civic sabbatical,” in which two individuals are awarded $100,000 to research, plan, implement, and present the results of a big, potentially community-changing idea over the course of a full year.

With this fellowship, People’s Liberty asks, “If you could have the gift of a year of time where you didn’t have to work, what would you do for yourself or for your community? What does it mean to you as personal and professional development as opposed to just a project?”

“That’s one of the most compelling things about this,” says Avner. “Every city should offer its residents some sort of civic sabbatical. Does it have to be a whole year or $100,000? I don’t know. But being given the safety net and room and permission to put your work life on hold and do something personal and civic has been really compelling to the people of Cincinnati. This idea has resonated beyond our wildest expectations.”

Initially the fellowship took a different – you could say perhaps more “traditional” – form. But after putting out the applications and getting down to the finalists for the first round, they realized they could do it better. At the risk of alienating applicants, they shut the program down, retooled it, and relaunched it – all part of the nature of being an experimental lab seeking out a new kind of philanthropy.

“We knew we were asking the wrong questions, and if we asked different questions we could have a more successful program,” Avner explains. “People really respected the fact that we knew we could do better. It kept our mission of being a philanthropy lab of constantly learning and experimenting.”

Already other foundations are taking note of People’s Liberty. Avner says they are building a network of advocates, ambassadors, small funders, and other philanthropic organizations outside of Cincinnati eager to see how this experiment of theirs plays out and learn from it themselves, which was also one of the goals of People’s Liberty.

“We invite anyone who wants to come in and take a look under the hood. Talk to our staff, talk to our grantees, talk to our critics – if we can find any,” he jokes. “Every community should have something like this, and if we can help others do it, that’s even better. We want this to be something other communities can learn from. If foundations aren’t careful, they’re going to be left behind in this changing world of philanthropy.”

Over the five-year run of People’s Liberty, 150 people in Greater Cincinnati will have had the experience of doing something with civic impact within their communities.

“I honestly believe that collection of people will be the next generation leading this community,” Avner says. “People make places and exceptional people make exceptional places. If foundations want to invest in places, part of that has to be investing in people. I think over five years we will prove to ourselves and to others that making this type of investment in individuals is integral to a place-based investment strategy.”