As the daughter of two rocket scientists, Kaz founded Curious Catalyst to marry investigation with action, bringing disruptive agile approaches to urban challenges and a new take on the business of social impact through her experience with lateral thinking, rapid prototyping, and human-centered design. After years working with emerging technology platforms and solving larger cross-disciplinary problems in the digital agency space, she earned her stripes in the start-up world, leading strategy and operations for early social media innovators and then an open-source cloud computing powerhouse focused on the developing world. She graduated from the innovation program at THNK School of Creative Leadership in Amsterdam before helping launch their new campus in Vancouver, where she heads the faculty and runs the Challenge program. She is a Stanford graduate and a Certified Scrum Master.

It’s almost impossible to attend a conference on Smart Cities or Urban Innovation without finding a group of people shilling the radical transformation that’s possible with Agile or Lean methodologies, as popularized by the Lean Start-Up refrain of Eric Reis. But these approaches produce specific types of outputs and are nowhere close to the panacea our cities increasingly demand.  A simple primer on these methodologies will highlight short, tight cycles of effort, called sprints, with multi-disciplinary teams dedicated to cracking well-articulated tasks (with Lean aimed at developing a business model and Agile connoting a process that can be applied to executing almost anything that lacks clear definition).

So, what does any of this have to do with the urban challenges we’re facing like air pollution, waste and recycling, or uneven access to resources?

At the most basic level, it is clear that we can’t continue using the vastly outdated ways of working in our cities, taking years to test and implement broad adjustments.  The system behind synchronizing traffic signals in Los Angeles is a prime example. The Automated Traffic Surveillance and Control system indeed delivers one of the world’s most comprehensive systems for mitigating traffic, but it was developed over 30 years at a cost of $400 million. When the citizenry and their demands are evolving on a timescale of months not years, these kinds of timelines are impossible to maintain.  And most of the pilots we see coming out of city planning departments have to do with execution strategy – rolling something complex out to a few users first, either for PR purposes or to speed adoption and win more budget once a solution is shown to be implementable.

In Internet and communications technology, Agile and Lean disciplines have led to the meteoric proliferation of innovations.  And it’s de rigueur to view the speed and truncated timeline as the biggest reason to adopt these practices in shaping our mega-cities.  After spending nearly two decades orchestrating teams in the emerging technology sector, I deeply believe there is enormous potential, but only if we can get past the jargon and grasp the core tenets of these concepts – and it’s NOT speed.

The biggest benefit of using Agile or Lean to push the boundaries of innovation is that user needs drive the process as well as the outcome.  And learning is understood to be a more important outcome than mere implementation.  By this I mean that there is a subtle but critical distinction between running a pilot to prove an idea versus testing the assumptions and hunches we have while actively iterating solutions.  For the sake of argument, I’ll simply refer to this approach as Agile, since the same iterative learning loop is at the core of how Lean can best be used for cities. So, let’s take a closer look at user needs in this context.

Technology companies live and die by how well they can respond to their user needs.  And don’t confuse this as merely responding to comments made on twitter by having a dedicated customer service team placating complaints.  A true feedback loop must be built into the product development cycle, which can then expose, measure and optimize how well ideas and input are taken in, digested, and integrated. This removes some of the ideation burden from the core team, as your users will have ideas emanating from their daily use, and it ensures that effort applied to those ideas will strengthen loyalty and stickiness. 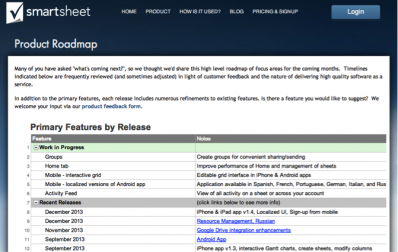 Take my favorite productivity tool as an example. Smartsheet not only responds within hours to questions about features or product enhancements but also posts their entire Product Roadmap for users to examine.

Of course, in technology companies pumping out ephemeral products made of 1s and 0s, there are no vested interests bound by the costs of real infrastructure and no political cycles intermediating the costs of pilots and greenlights.  But imagine how much more efficiently we could invest taxpayer dollars and direct private investment, if we truly committed to putting human-centered design at the heart of a rapid iteration framework.  By testing the assumptions we’ve made about true citizen needs and the barriers they face to adopting new municipal services, we could flexibility adjust solutions before discovering costly error months (or years!) into an initiative.

A burgeoning understanding of this seems to be reflected in the recent report from the Knight Foundation on Civic Tech, which shows a swell of emerging investment. Granted, many of these fledging companies and apps facilitate input and engagement from the digitally savvy citizens, who may be the least impacted by the vagaries of low-income city dwelling.  And these still don’t address the system into which the user feedback is ingested – the disciplines of urban planning and innovation itself.  But it’s an important start.

How might this work if we take the gnarly, entrenched problem of food deserts?  An issue of this level of complexity would take hours to deconstruct.  But at the most basic level, what we can safely say is the following:

Taking an Agile approach to this challenge would mean starting with that most basic assumption: that access is the crux of the problem.  We would test other means of putting regularly available, competitively-priced fresh foods into the ecosystem to see what happens, as I’ve proposed with pairing food trucks with existing large-scale grocers who can leverage their existing infrastructure to keep costs down.  And we’d need to consider the role of the multitude of factors, from the time that a single mother may have to prepare food from scratch (are healthy frozen meals the answer perhaps) to understanding what kids will eat no matter the cost of convenience.  The point isn’t that food trucks are the answer, but that they may allow us to rapidly test ideas around access, taste, desire, and nutrition without investing in large-scale effort.  We should place small bets, and double down where we find traction.

A constant, responsive learning mindset around the true unmet needs of citizens will begin to demand a more rapid cycle of engagement, improvement, and implementation – and THIS is the real reason urban solutions need agile approaches.  A reframe of this nature creates a virtuous cycle that we can no longer afford to ignore amid mass urban migrations and mega-cities spreading across the globe.  This approach takes courage, as it relies on admitting that the experts may not have the answers at the start.

Rob Shelton, a Global Innovation Strategy Lead at PWC captured this beautifully at the Social Innovation Summit at the end of 2012.  He wanted to dispel the fashionable notion that to innovate, one must fail forward or fail fast.  As he says towards the end of the clip below (around minute 10:00), inspired by the great physicist, Fermi, “Take a hypothesis, your bold vision, and test it, prototype it.  If the results match your hypothesis, you have data. If when you test your hypothesis, the results don’t match, you have a discovery [not a failure!].  At the heart of great innovation are partners working together in an ecosystem, doing rapid prototyping to test things, embracing the duality of data and discovery.”

To get to breakthrough discoveries, we need educated risk-taking and bold commitment to trying new approaches.  If we can embrace Agile methodologies in an urban context, deeply valuing their core principles of flexibility, learning from true user needs, adjusting solutions, and quickly testing, perhaps our citizens will enjoy the same kind of revolutionary transformation we’ve seen in the technology arena.  While I’m a deep believer that not all problems can be solved by technology, our urban challenges can surely benefit from its Agile and Lean underpinnings.