Marilyn Hamilton is the founder of City Meshworks Inc., an organization that develops technology to profile city psychology, culture, biology and systems, and co-generates strategies for city and eco-region resilience.

In my Meeting of the Minds 2013 Delegate Interview I explained how I derived a new paradigm for the city that arose from both my practice and engagement with my own city of Abbotsford and from my study and application of the Integral Model.

With my background in accounting as well as human systems, my praxis of the city soon lead me to consider how to notice wellbeing in the city and what metrics might be appropriate to monitor it.

A precept of the Integral Model is its definition of “holon”. A holon is both a whole system in its own right, while at the same time being part of a larger whole system. Such is the natural “order” of complex living systems—cells, organelles, organs, individuals, teams, organizations, communities, cities, nation/states—all of which have been well studied by interdisciplinary research teams in Panarchy and Living Systems (Gunderson & Holling, 2002; Miller, 1978). Wilber (1995) coined such a set of nested holons, a “holarchy”.

It was thus my conclusion, that in order for monitors and metrics of city wellbeing to be truly integral, they must integrate metrics from the four quadrants (as identified in my earlier bio/intro).

Furthermore, as many complexity-oriented practitioners have noted, the city is a composite of many different scales that co-exist and dynamically impact one another. So it is a challenge to present a model that captures the complexity of the four quadrants, holons and measures of wellbeing. (For the sake of this article, I am assuming that measures of wellbeing are identifiable and can be defined in terms of desired targets. The assumptions related to this have been documented in my book “Integral City: Evolutionary Intelligences for the Human Hive”.)

The schematic that presented as a starting point for this exploration has become what I call Map 2 in my book Integral City: Evolutionary Intelligences for the Human Hive (Hamilton, 2008)—see Figure 1. In this holarchy, the nest of holons begins with the individual resident of the city, and locates him/her in all the other holons to which they are a member. 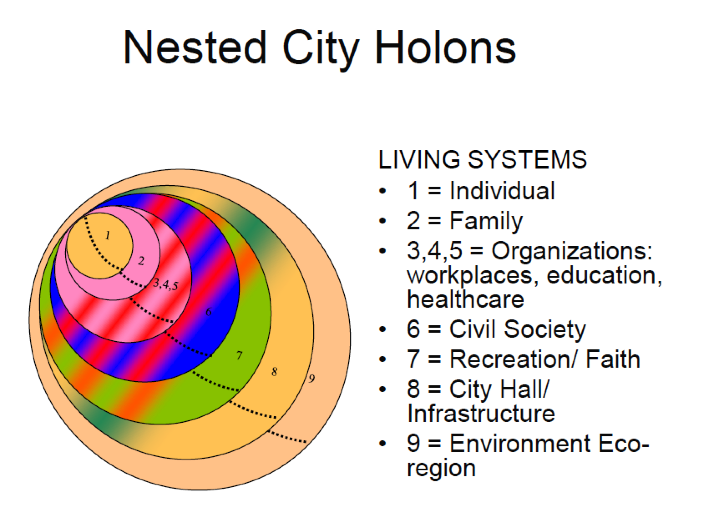 In this way, each holarchy starts with an individual represented by his/her inner and outer realities (representing Upper Left and Upper Right quadrants); then is nested in a series of collective holons, to which the individual (simultaneously) belongs. Each collective is essentially a different scale of human system that represents a different set of collective contexts for individual reality (but each represents a version of Lower Left and Lower Right quadrants). A simple way to see this is that Janet (our individual holon) belongs to the Family Smith, baseball team A, workplace Task Force B, school class C, health district D, community E, and city F.

In experimenting with the relevance of this Integral Holarchy, I have found that it offers very useful organizing principles for a set of vital signs monitors for the city. The Integral frame prompts us to look for metrics from every quadrant (qualitative and quantitative data for individuals and collectives). The Holarchy frame prompts us to seek data from every scale. And the wellbeing target frame suggests we find data that can be defined by targets measured in terms of a traffic light system (e.g. Blue = exceeds target; Green = on target; Yellow = off target; Orange = health threat zone; Red = health danger zone).

Luckily in our modern data producing era, data is not something that we are short of. Our governments, agencies and organizations are veritable data producing machines. Rather what we lack is effective data mining and interpreting frameworks that can detect the patterns that can inform us. Thus, with little effort, we can identify data sources in the city, and with an Integral Vital Signs Monitor frame we now have tools to make sense of what that data is telling us about wellbeing.

Although it may well take more political will to release that data for monitoring purposes, it is entirely possible to prototype wellbeing monitors for the city. I have done this for a series of research projects that has produced a template for organizing the data (as shown in Appendix A). And thanks to partners, Gaiasoft, I have been able to model the prototype as shown in Figure 2. 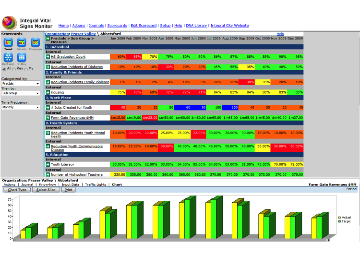 The value of this prototype is that it shows us how we can make new sense out of the human systems that make up our cities. Moreover it calls the many owners of our data to come to the same table and not only share what information they have accumulated, but to contribute to a whole new paradigm for monitoring city wellbeing.  These data providers can now realize that they co-own insights, that open in an entirely new way the interconnections amongst the supply chains in the city and enable a meshwork to emerge. (A “meshwork” weaves together the best of two operating systems — one that self-organizes, and one that replicates hierarchical structures. The resulting meshwork creates and aligns complex responsive structures and systems that flex and flow.) And for the first time we may be able to appreciate that our supply chains connect and impact our inner lives of consciousness and cultures as much as our outer lives of biology and infrastructure. That is the beginning of being able to design a monitoring system that appreciates and enables the city to engage all its stakeholders (we call them Learning Lhabitats) and see itself as a whole living system.