Alvaro Casalins is a director in the Deloitte Consulting Buenos Aires Practice. He is focused on and passionate about SMART cities, big data, and corporate entrepreneurship. His work typically involves partnering and consulting with clients to address solutions by applying best practices through the right combination of technology and capable teams.

We began working for the government of the City of Buenos Aires (GCBA) in January 2009. To be honest, I don’t think we had the slightest idea about what was to come.

Looking back, I believe there was a mix of long term perspective (clear vision) with a somewhat unconscious, innocent, but strongly felt desire to use our ability and effort to build a better world. Even though it may sound clichéd, we thought and felt this from the very beginning. I still think that this is the main driving force. If our projects succeeded we have improved people’s lives. This adventure I will now share with you I would love to tell my children about, should they ask me when they get older.

Obviously we are all interested in developing professionally in our chosen fields. But these days this alone is not enough. Once we set out on our own path and look ahead to the future, sooner or later the need to make an impact arises. Career and financial objectives are understandable and necessary but (today more than ever) they are not enough.

I live in a country that grows enough food to feed ten times its population, but where, paradoxically, one third of the population lives below the poverty line. It is impossible to ignore this reality and their implications. This is why simply focusing on our own work or duties will not change this situation. I think each of us is called to make a specific contribution to build a different reality. 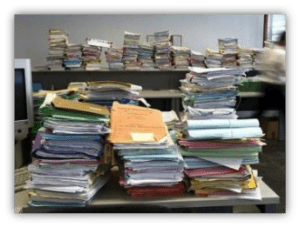 Argentina needs, and is going to need (for years to come), all the help it can get from, essentially, all of us who live there. I believe we must get involved. The modernization of public sector management is imperative as well as a top priority. Helping on building a new administration was my way of getting involved in addressing a better future.

My first serious and career-relevant job (not too serious, nor too relevant) was on the ‘court beat’. Basically, in a law firm, for an intern, fresh out of high school, it involved ‘door-stepping’ courts throughout the city; inquiring of a frustrated public officer something along the lines of “Any word on the Smith´s probate?”; noting down the ‘status’ on my ‘paper iPad’; and on occasion attaching a document, always on my beat. The names (like Smith) and the cases (like probate) would vary but always had (and usually have) the same feature in common: paperwork.

For obvious (and personal) reasons I was much more interested in changing that situation than pursuing a law career where filial connections offered the opportunity of secure employment.

Years later, having gained some experience, a great friend, who encouraged my entrance into the world of technology, and myself were mulling over what to ‘think up’ as a new service, when he said to me “Can you imagine what it would be like if the government used a World Class ERP?” I not only imagined it, I had a day dream.

My first ‘professional’ contact with public sector management was through the medium of paperwork. Systems existed, and were used, but did not transform or alter information flows of processes. They were only used as reference or secondary support.

When I had the opportunity to become part of a team that, seriously and with planning and organization, tried to introduce proven private sector practices into the public sector, I did not hesitate. At that time I sensed that change was already happening and I did not want to miss out.

The city of Buenos Aires is the capital of the Argentine Republic. The population of the city is estimated to be 3 million inhabitants, and if we add the urban agglomeration, Greater Buenos Aires, we reach 13 million; making it the largest urban area in the country, the second largest in South America and one of the top 20 largest in the world.

At the beginning of his term the Minister of the Environment and Public Space (MEPS) from the GCABA was faced with an obsolete administration, with cumbersome and unnecessarily complex procedures and no capacity to effectively respond to the needs and demands of citizens. At this point, cognizant of the fact that cities confront growing pressure to be more efficient and transparent with their use of public money, Deloitte joined an ambitious effort to modernize all the activity of the Ministry.

The principal project sponsor recently reflected: “the primary objective at the time was to enable a city that could respond to the neighbors’ needs”.

Deloitte was contracted by the MEPS to design and implement a Digital Transformation that would allow information centralization and coordination between stakeholders that would increase the quality and speed of response to citizens’ needs. At that time, the ministry did not have an Integrated Management System, which resulted in manual and highly inefficient procedures,. Again, lots of paperwork.

During the initial surveys and process analyses, we identified the following problems:

To offer a solution to these problems, a specific methodology for Infrastructure Management and Maintenance was designed and implemented, based on best practice and supported by a world class Technology Platform.

To implement this digital transformation, a scheme with specific characteristics was proposed:

The best way we find of describing the implemented “Solution” (now called ´Responsive City´-RC) is through a visual explanation: 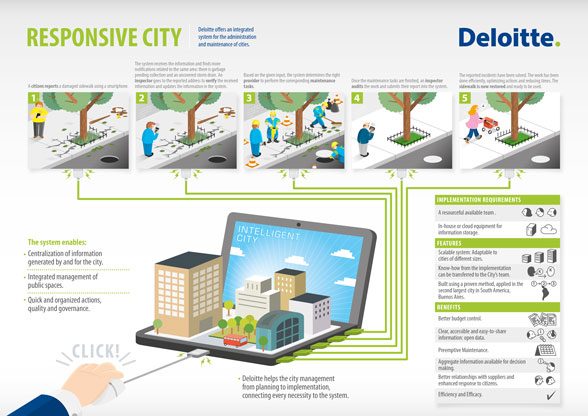 To understand the way that this Solution was implemented, here is a diagram with the projects milestones that where aligned to the original roadmap:

As you can see on the picture above, in the first four years we designed and refine the baseline solution at the time we made the rollout to different areas/objects. During the las two years we added mobile, IoT and data science functionalities.

Along this years, the implementation allowed, while maintaining the original funding:

It has been 7 years since we set out on this path on which we continue. It is not easy to summarize the principal takeaways but, I believe it might be valuable to share a few points with you all:

Finally, returning to where it began, I should quote, once again, our main sponsor: “The most important thing is that the ‘Solution’ transcends us, that once government officials leave their posts, and Deloitte is no longer there, those who may be there, carry on using the same solutions and building on them. Only in this way real progress is achieved. Leaving management in a better place so that others may improve it further”.