The Millennial City: Sell Me Your City

Justin M. Bibb and Ian T. Brown are the Founding Partners of the Morris Strategy Group, strategic consultancy that provides advisory solutions to companies, institutions, and governments. Collectively they have over 10 years of experience advising leaders in the public, private, and social sector on issues related to urban policy, economic development, and community revitalization.

Learn More
This blog post is a part of a three part series conducted by the Morris Strategy Group examining how city leaders can develop new strategies to attract and retain Millennials.

Don’t try to sell me on the suburbs. I’m a Millennial, between the ages of 25 and 34. As 2010 U.S. Census numbers confirm, my cohorts and I are moving from the suburbs into the city at a faster rate than we’ve seen in years in the United States. Why is this?

For starters, I’m less inclined to start a family as early as previous generations. I probably won’t get married until later in life (if at all), and I’m more than likely to have fewer children than my parents. And if I’m not starting a family until later, this means I don’t need a house with 2-3 bedrooms or a yard right now. I can instead survive in a smaller living space, such as an apartment closer to the city center, with a view of its bustling urban core. In short, I’m not looking for the suburbs right now for the want of space.

But it’s not just a question of starting a family later in life. It’s also a question of how far my income can go. By living in the city, it means I won’t need a car to make a 30-45 minute commute from home to work. I’m more likely to prefer a short walk or a bike ride to work. If I can use Lyft or a bike share program and forgo buying a car, it’s better for the environment. Moreover, it allows me to save money.

It’s essential that I can make my income go as far as possible. I’m lucky to have the job that I do. Many of my former high school or college classmates struggled to find something after they graduated. Some of us stayed in school and got more degrees with the hopes of being more competitive in the job market. A few of us found jobs – mostly entry-level – with decent starting salaries. Examples of such jobs are working in city government or for a local start-up. These jobs offer opportunities to gain professional experience and to make direct contributions to improving the community where we live. I’m making enough money to rent a one bedroom apartment near work, but not nearly enough to buy a house in the nearby suburbs.

We Millennials – single, active, and educated – don’t need the suburban life right now. We are city dwellers. We have disposable income for rent and for entertainment. We prefer living near bars, art galleries, coffee shops and bus routes. We boost the local economy through our consumption. And we have a general desire to improve the city around us. We join social leagues. We support local farms by joining community-supported agriculture networks. We volunteer to build parks and community gardens. Our aim is to leave the campsite better than we found it.

But keep in mind; we’re not all moving to cities in the high-income regions of California and the Northeast, such as San Francisco, New York, or Washington, DC. In fact, cities like Washington, DC are pricing out its Millennial population because of skyrocketing rental costs. As a recent article shows, some residents are even forced to sub-lease the sunrooms of their one-bedroom apartments just to cover the monthly rent. Millennials are moving to DC at a median age of 26, and migrating out at a median age of 29. This three year window of time is too tight to capture all the creative energy and civic-mindedness that Millennials have to offer. Worse, that level of residential turnover does little to foster community between a city and its residents. 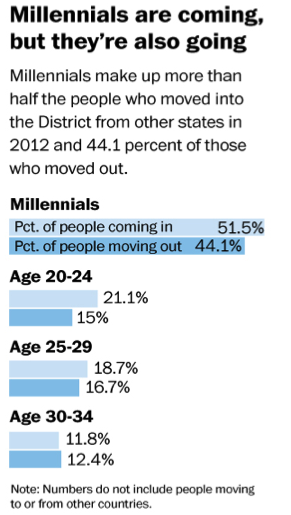 Therefore, cities in the expensive coastal regions are not the only options. States all across America want to keep their creative class – with all its talent and enthusiasm – rather than lose it to other vibrant urban markets. Cleveland, Indianapolis, Omaha, Raleigh – they all want to keep us. And we are willing to live in smaller, more affordable cities, so long as there are jobs. Cities that can attract 21st century industries – such as high-tech, health care, and advanced manufacturing – are the cities that will compete with the coastal elites. And those are the cities that will attract us.

Don’t try to sell me on the suburbs. Instead, sell me on your city. Sell me on the 21st century industries you’ve brought into your area through tax incentives and training programs. Sell me on mixed income land development, with local businesses on the first floor and economic opportunities for all socioeconomic levels. Sell me on smart urban planning, on smart growth, on managed density, and maybe on some bike share or bus stations near my building. And please, sell me on green space. Put a small park amidst a cluster of converted and renovated residential buildings, and I’ll use it on a sunny Saturday.

Sell me on the possibilities of how inclusive, equitable, and sustainable your city can be. And I promise I’ll leave your city better than I found it.