Josef Goodman is an Associate at the Morris Strategy Group where he specializes in political and economic research and public policy development. He is a graduate of Yale University where he served as Editor-in-Chief of the campus political journal, The Politic, and has published many research articles on urban revitalization.

Keep the Builders Accountable and Let them Build

For nearly five decades, the Seward Park Urban Renewal Area has stood out as a bleak history lesson on the failings of urban planning. In 1967, the City of New York demolished the homes of more than 1,800 low-income families on the south side of Delancey Street, promising to return and resettle the predominantly Puerto Rican community into modern, clean, new construction housing. The advocates of SPURA had precedence on their side: hundreds of American cities, empowered by the Federal Housing Act of 1949, had already demolished the homes of 400,000 working families to clear the way for 11,000 new public housing units. The national program made the case that the only way to save America’s cities was to destroy them first. 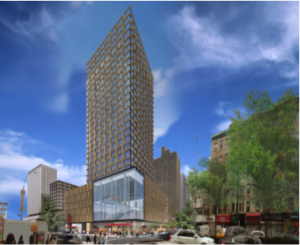 The 20 acres on Delancey Street, however, were never developed. Rather, the land was abandoned, where for half a century, it has sat attracting the most unsavory of squatters, from drug addicts to rats. This is set to change. A few years ago the City selected a consortium of real estate developers to build upon the land, and to remove the scar from the city’s streetscape. L+M Development Partners, Taconic Investment Partners, and BFC Partners won the City’s bid and over the next decade ‘Essex Crossing’ will bring 1.9 million square feet of mixed-use space to the Lower East Side. Phase One, which began construction this summer, will bring 561 apartments, a mix of rentals, condos, and subsidized senior and affordable units. The first phase of construction will also open a Regal Cinema, the new Essex Street Market, a supermarket, a bowling alley, and other retail and commercial space. In total, the mega-development will bring 1,000 new units of housing to the area, of which half will remain permanently affordable, and a new life to Delancey Street.

Essex Crossing represents a model of development that benefits all participants, from private investors, to public officials, to local residents. Other case studies are exemplar of this model as well. The Domino Sugar redevelopment plan will repurpose the abandoned factory and 11 acres of Williamsburg, Brooklyn waterfront by creating a mix of office space, market-rate and affordable housing, neighborhood retail, and community facilities. Upon completion in six to eight years, the project will invest $1.5 billion and build 2,300 apartments, of which 700 will be affordable. As with the Essex Crossing development, the Domino Sugar redevelopment plan only won City approval by agreeing to reserve a certain percentage of affordable housing.

SL Green’s plan for One Vanderbilt Avenue is another example of a beneficial private-public development agreement. The largest commercial landlord in New York City, SL Green recently received zoning approval for its proposed 1.6 million square foot tower, which will stand across the street from Grand Central Terminal. In exchange for a height boost, the company has agreed to invest $220 million into the terminal’s transportation infrastructure. 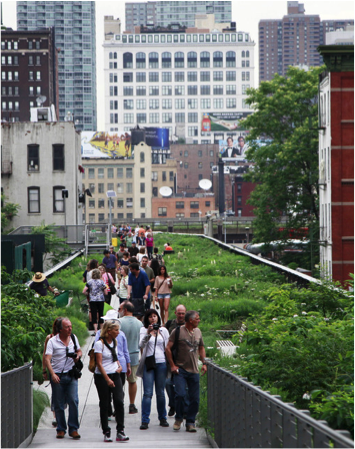 Even when the local government does not demand explicit concessions, the indirect economic benefits of private development are undeniable. The High Line in West Chelsea is a prime example of this. The Bloomberg Administration converted the abandoned elevated, former rail line platform into a pedestrian greenway. Though it cost the City $112 million to build, as of 2013, the new park had spurred more than $2 billion in private investment, most in the form of luxury real estate development. Critics argue that the City could have extracted more from these developers. It is true that no affordable housing is being built around the park. Nonetheless, the park is expected to bring in an estimated $900 million in additional tax revenues over the two decades, which represents a return of nearly 900 % on the City’s investment. Meanwhile, Hudson Yards, the $20 billion redevelopment of the rail yards that abuts the High Line on the West Side of Manhattan, has generated billions in fees and taxes for the City.

Real estate interests realize that they stand to benefit foremost from vibrant public spaces. Some companies in New York are investing directly into urban amenities without any government-backed financial incentives. Since the demolition of the original, grand Pennsylvania Station in Midtown Manhattan, the area surrounding the successive structure has long held the contempt of New York commuters and workers. Vornado Realty Trust, one of the nation’s largest office landlords, is looking to change this perception by investing hundreds of millions into new retail space, public plazas and other infrastructure. The landlord owns $5.5 billion and 9 million square feet of real estate in this second-tier commercial submarket, including the 57-story 1 Penn Plaza. In early August 2015, Snohetta, the architecture firm Vornado tapped to redesign the area, opened it first plaza. The space, planted with wooden benches, gives pedestrians more room to walk and linger. As Vornado continues its investment in the area, pedestrians will benefit from a more welcome public space and the landlord from appreciating real estate values. 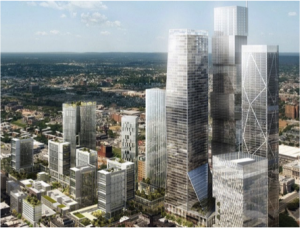 Of course, some will argue that New York City is lucky: there is private sector interest in these urban improvement projects. The public sector can therefore rely upon private capital, but in many other cities, from Detroit to Newark, the government is often left in want of private partners. This is only partially true. New York City is certainly an exciting place to invest and do business, but the private sector is gearing up even in ‘second-tier’ cities. Community and business leaders in Newark, New Jersey recently announced a $50 million venture fund – financed by Audible.com and Prudential Financial and backed by city and state leaders – that aims to support a cluster of tech firms. The partners also announced a new startup accelerator space in downtown Newark and an outdoor high-speed Wi-Fi network that will connect public spaces and public housing projects. These private investments are necessary if downtown Newark hopes to attract and retain top talent, in the tech sector and otherwise.

This is not to say that local governments should hand the private sector carte blanche to redesign cities in its own images. Businesses pursue their own interests, and not necessarily those of the public. Indeed, businesses often pursue their interests at the expense of the public. As New York City has experienced, neighborhood revitalization happens when and where public and private interests meet. The local government has held real estate developers accountable and has taken advantage of their talents and resources, without being taken advantage of itself.

Urban economist Edward Glaeser describes “the folly of building-centric urban renewal.” Public policy should help poor people, not poor places, he believes. Glaeser cites the development of GM’s Renaissance Center in downtown Detroit in the 1970s, conceived by Henry Ford II and financed primarily by the Ford Motor Company. The Renaissance Center never fulfilled its promise to revitalize the city’s downtown. Ford built it, but they did not come.

Glaeser writes that the cardinal sin of ailing cities is their failure to educate their workforces; the faux pas of successful cities is their anti-development zealotry, manifest in zoning codes and historical districts, which hampers development. New York City is a respectable model for others cities to follow. Keep the builders accountable and let them build. Local government has plenty else to handle.