Meghan Harte is the Executive Director of LISC Chicago.

Ever since, and long before, the housing market crashed in 2008, with its devastation of homes, neighborhoods and lives, pundits and policy makers have debated the wisdom of advocating for homeownership – particularly in minority communities. Conservative voices often argue that government is wrong to subsidize mortgages for low- and moderate-income families’ home purchases (putting, they say, both family and social wealth at risk).  At the same time, certain liberal voices argue that federal policies that provide tax deductions for mortgage interest – even to the poor – are unfair to those who rent, and represent unearned enrichment for homeowners.

While the debates are interesting, I – like many of my peers who are concerned with racial equity, ending poverty, and neighborhood revitalization – look at the issue from a more practical point of view. We ask, simply: Is home ownership critical to building the individual and community wealth that helps ensure the wellbeing of families and neighborhoods alike?

The answer, as far as I can tell from both the scholarly literature and my own observations, is a resounding yes.

The importance of property ownership is older than our nation itself. And although (thankfully) owning property is no longer a requirement for voting, home ownership makes a difference to the lives and life outcomes of individuals and their families.

As the New York Times published in a 2014 editorial urging the resumption of homeownership after the banks had been hesitant to loan:

“Homeownership long has been central to Americans’ ability to amass wealth; even with the substantial decline in wealth after the housing bust, the net worth of homeowners over time has significantly outpaced that of renters, who tend as a group to accumulate little if any wealth.”

And while many have written about the horrendous loss of wealth, particularly among African-Americans and Hispanics, in the foreclosure crisis, which was compounded by predatory lending, a University of North Carolina study of low- and moderate-income homeowners through and after the crash demonstrated that, in the end, homeowners fared far better than renters:

The authors note, “These differences held even when groups were matched by pre‐crisis net worth levels, suggesting that there are indeed wealth‐building effects associated with affordable homeownership.”

Longtime community activist and advocate Allan Mallach, who has spent much of his time working to revitalize Detroit, writes that homeownership is as important for communities as it is for individuals. 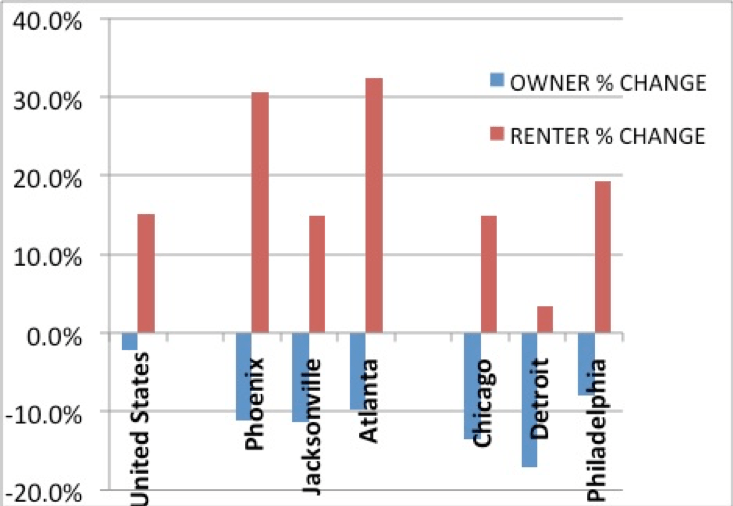 The evidence is compelling; homeownership matters.

In a 2014 article in Shelterforce he writes about the impact on neighborhoods – where speculators stepped in to scoop up vacant properties:

“Particularly where house prices are very low relative to rents, which is true in large parts of many of America’s older cities, a lot of the investors who are buying these houses have no intention of holding onto them and maintaining them properly. Instead, they plan to milk them for a few years without putting any money into them, and then move on, leaving a trail of dilapidated properties and destabilized neighborhoods.”

Mallach also echoes what every community organizer already knows. Homeowners and owner-occupied rental buildings do what even the best absentee landlords can’t do: keep money in the communities and remain committed to and active in civic life, activities that are critical to the health and welfare of neighborhoods and cities alike.

“The sheer accumulation of evidence points strongly in the same direction, that homeownership, even when controlling for social and economic differences like income or household type, matters in a lot of ways that affects the health and vitality of neighborhoods,” he says.

We all know these communities: where homemade block-club and neighborhood watch signs signal that people watch out for each other and feel some semblance of control over neighborhoods and life; the blocks and neighborhoods that keep elected officials accountable by holding feet to the fire; the ones where community is more than a real estate nomenclature.

We also know how to build – or rebuild them. While Mallach cites Detroit, which is working block by block to reverse 60 years of disinvestment, in Chicago we have many great and promising examples.

In Woodlawn, where for the first time in more than 50 years a full-service grocery store will soon open, the reclamation of dilapidated, abandoned and/or foreclosed properties for use as both rental and for-sale affordable housing and a federal government grant have led to $400 million of investment in new schools, stores, buildings; has increased the population and has given a glimpse of what redevelopment without displacement can look like. For the first time since the 1950s, crime is down, and the population is up.

On the Southwest side of Chicago, where the foreclosure crisis hit with a vengeance, leaving hundreds of classic Chicago bungalows and two-flats abandoned, the Southwest Organizing Project (SWOP) has teamed with a skilled for-profit developer and successfully reclaimed, rehabbed and sold scores of them at prices affordable to working families. Now crime is down and local school quality is up.

Back of the Yards

In Chicago’s Back-of-the-Yards neighborhood, a non-profit bought the bank that was on the verge of collapsing, refinanced the mortgages and save the homes in this community, which was fundamentally threatened with massive foreclosures.

Supporting these neighborhoods and expanding to others, the City of Chicago, with funding from the John D. and Catherine T. MacArthur Foundation, has instituted the Micro Market Recovery Program. This is a focused, block-by-block effort to stabilize current homeowners and create new ones while also preserving rental options.

And County Government created a landbank to protect neighborhood properties from further deterioration because of disinvestment, until communities could effectively plan for their futures.

Chicago like many cities is planning its next five-year affordable housing plan. As usual, and as is true on the national level as well, most advocates are spending their time and thought focusing on the need for affordable rental housing – always a need and always a lofty goal – but is that enough?

We know that to have any wealth, ownership of property is key – always has been, probably always will be, and it is the basis of our nation’s creation and legal system. But in Chicago, only 30% of renters have income sufficient to support buying property and sustaining a mortgage payment. 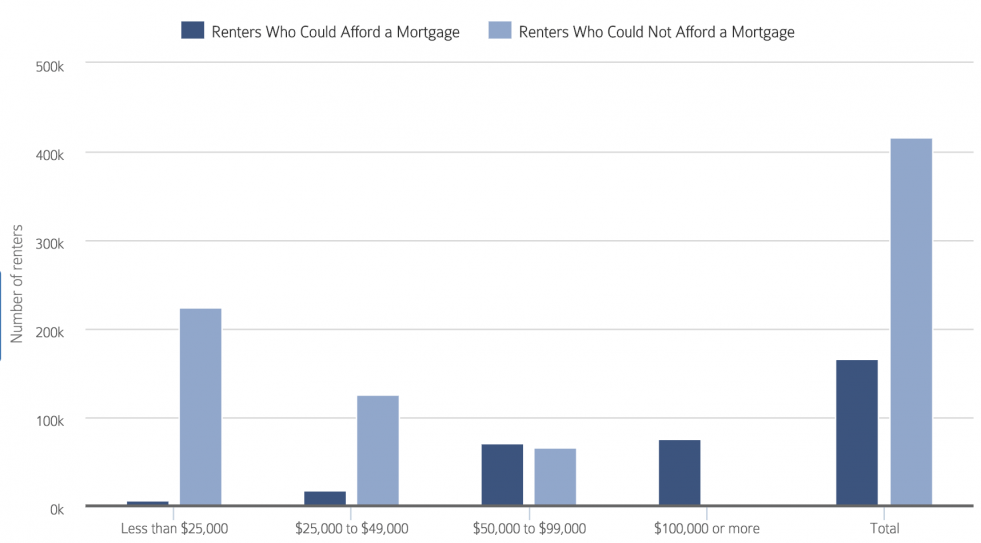 As several publications suggest, this may take more than subsidized housing. It may take measures such as:

We would add however, that it will also take a new perspective on federal, state and city subsidies – a perspective that would ensure allocations for the creation of homes across the income spectrum, creating the kind of “home ownership society” that politicians talk about and immigrants believed was true before they left their homes.

In the end, to paraphrase the 2014 Times editorial: “Renting can make sense as a lifestyle choice or because of income constraints.” For building wealth, however, both individual and community, there is no substitute for homeownership.