Trust is critical to our society. But headlines show Americans no longer trust government and institutions, and we certainly don’t trust business. Even trust among our fellow Americans is in decline.

Trust is the foundation. And right now that foundation is crumbling.

While this challenge can seem daunting, perhaps even insurmountable, I believe trust starts at the local level. And in Akron, we’ve found that the simple acts of bringing neighbors and residents together and working side by side on our shared spaces offers a good first step at rebuilding trust.

Through Akron Civic Commons, a series of investments in our public spaces—the parks, trails and community centers meant to serve us all—we’ve discovered the power of the civic commons to bring people together and counter these trends of distrust. And we’ve developed a new way of working that puts trust at the center of community investment.

Summit Lake: Moving at the Speed of Trust

Just two miles south of downtown Akron, on the Ohio & Erie Canal Towpath Trail, sits the 100-acre Summit Lake. Once known as Akron’s “million dollar playground,” in the 1920s it attracted thousands of visitors to its shores to swim, picnic and boat. But the years of industrial abuse, isolation and disinvestment that followed left the lake and the nearby neighborhood scarred. 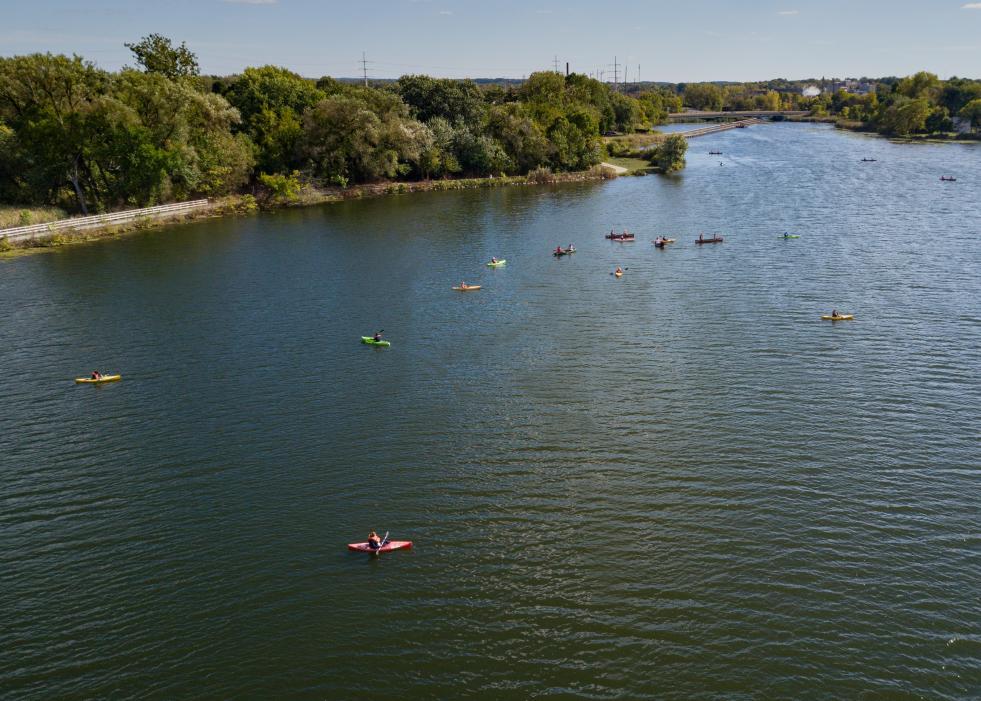 Akron Civic Commons launched in 2016 as a demonstration project of Reimagining the Civic Commons. After selecting Summit Lake as one of the sites for reinvestment, we immediately recognized that one of the greatest challenges to the work was overcoming decades of broken promises. There was a legacy of things being done to the community, not with them, and a healthy skepticism and mistrust of government and community organizations. If we wanted to do this work, it was imperative that we restore trust as part of the process.

And so began our journey of continuous learning and a commitment to moving at the speed of trust.

Our first step was to expand the core team working on the Akron Civic Commons initiative in our three neighborhoods to ensure that it included representation from our residents and neighborhood organizations. We intentionally sought diverse representation, including gender, age, race, education and experience, as well as representatives from small non-profit organizations like Students With A Goal and larger organizations like Summit Metro Parks. Some of our representatives, including Tom Fuller with Alpha Phi Alpha Homes and Summit Lake resident Star Saulsberry, were initially skeptical and reluctant participants. 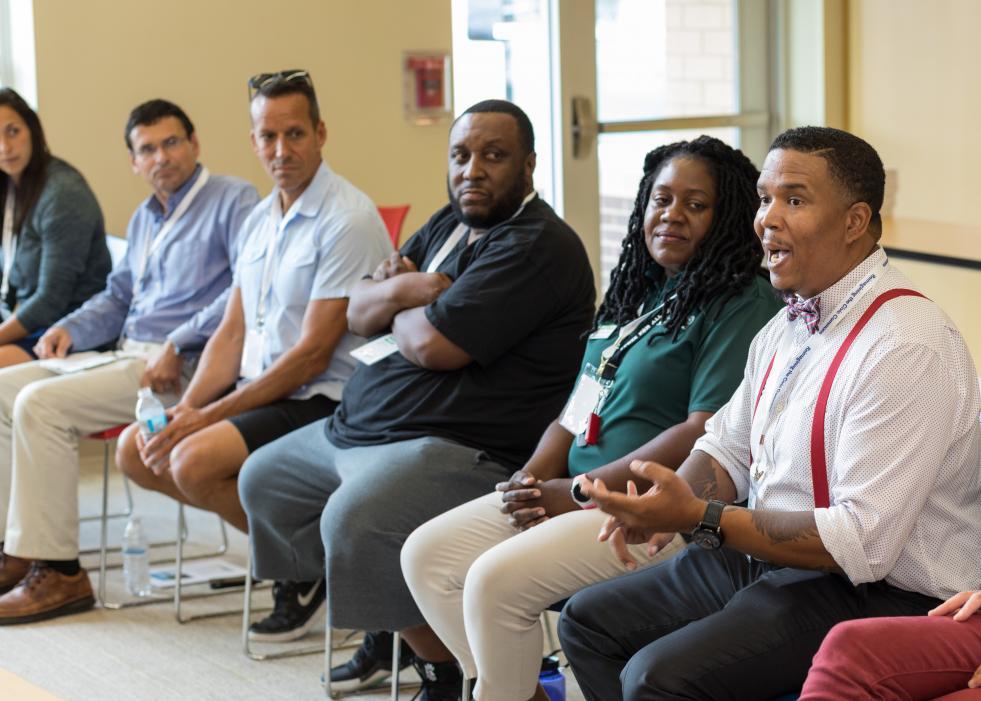 It was a slow and steady process. We knocked on doors. We hosted listening sessions with potluck meals. We created moments for exchange among neighbors to understand how we might co-create the future of Summit Lake—together.

During neighborhood meetings in early 2017, residents prioritized the capital improvements and programming ideas they wanted to see at Summit Lake. Their top priorities included environmental programming, places to sit and an outdoor pavilion for events and picnics.

Akron Civic Commons provided mini-grants to neighborhood organizations for work that aligned with our shared outcomes of civic engagement, socioeconomic mixing, environmental sustainability and value creation. One of our key partners, Students With A Goal, developed an innovative photography apprenticeship program, called Leaven Lenses, for Summit Lake youth. Leaven Lenses provides kids in the neighborhood with the opportunity to learn photography skills, obtain a small stipend and create social bridging with professional photographers in the Akron community. Leaven Lenses is an excellent example of Reimagining the Civic Commons goals of socioeconomic mixing and value creation. 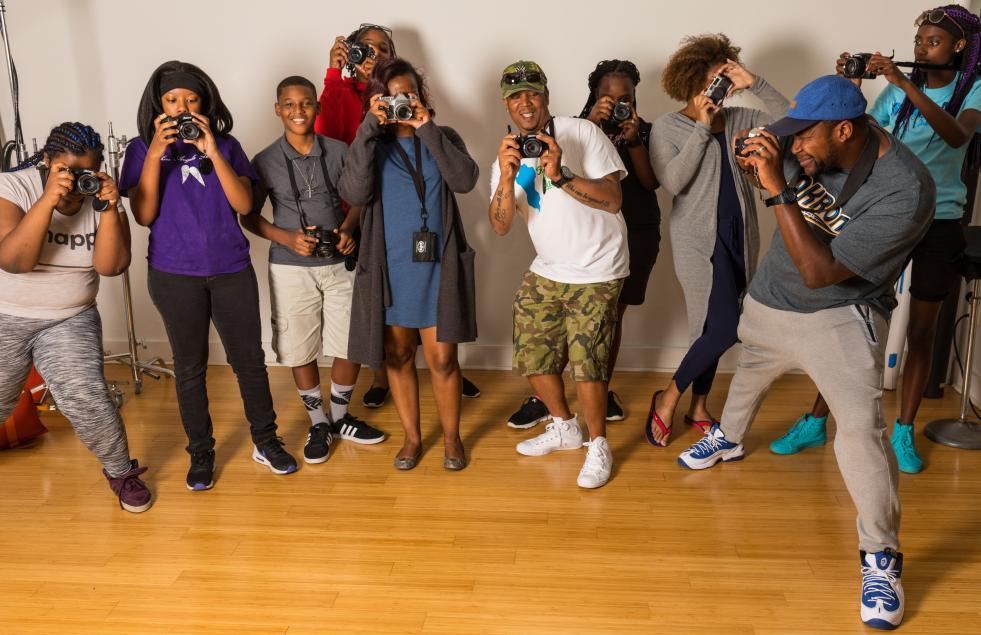 We sought to deliver quality, but with a mindset that we would test each idea for a period of time before making any permanent installations. As soon as the phrase “testing the idea” is introduced into the conversation, the tone and body language of our partners transforms from reluctance and hesitation to a willingness to test an idea and learn from the experience. It has been freeing to test an idea, and through this frame we have found that the “no’s” quickly recede to the background replaced by support, even among folks who had been skeptical.

Our efforts culminated last summer with relatively inexpensive and early investments in prototype improvements around the lake, including new benches and shade umbrellas, outdoor grills, a nature play area and a pop-up nature center. Programming has included canoeing and kayaking on the lake and children’s fishing lessons.

With these light-touch improvements we saw quick results. Neighbors from near and far were in the park by the lake again, and we saw an increase in the diversity of users. The stigma from decades of neglect was lessening.

A new narrative for Summit Lake is being written. And it’s residents doing the writing. In some cases, quite literally.  One of our neighborhood storytellers is Star Saulsberry, who initially was a skeptic of our Akron Civic Commons work at Summit Lake. As Star acknowledges, it was her husband, Marcus, who participated in our early work at Summit Lake, who encouraged Star to become involved in the Akron Civic Commons project.  As Star wrote in her guest editorial in the Akron Beacon Journal on August 11, 2018, “What I learned from Summit Lake,” “My first thought was: Here we go. A bunch of professionals coming in to tell us what they are going to do. They don’t care about Summit Lake and low-income people’s wants or needs.  The past three years have made me a believer in civic engagement and my own power to affect change. I have learned a great lesson from Summit Lake:  When given the opportunity, positive, active residents have the power to change a struggling neighborhood into an amazing community.”

But it didn’t end there. 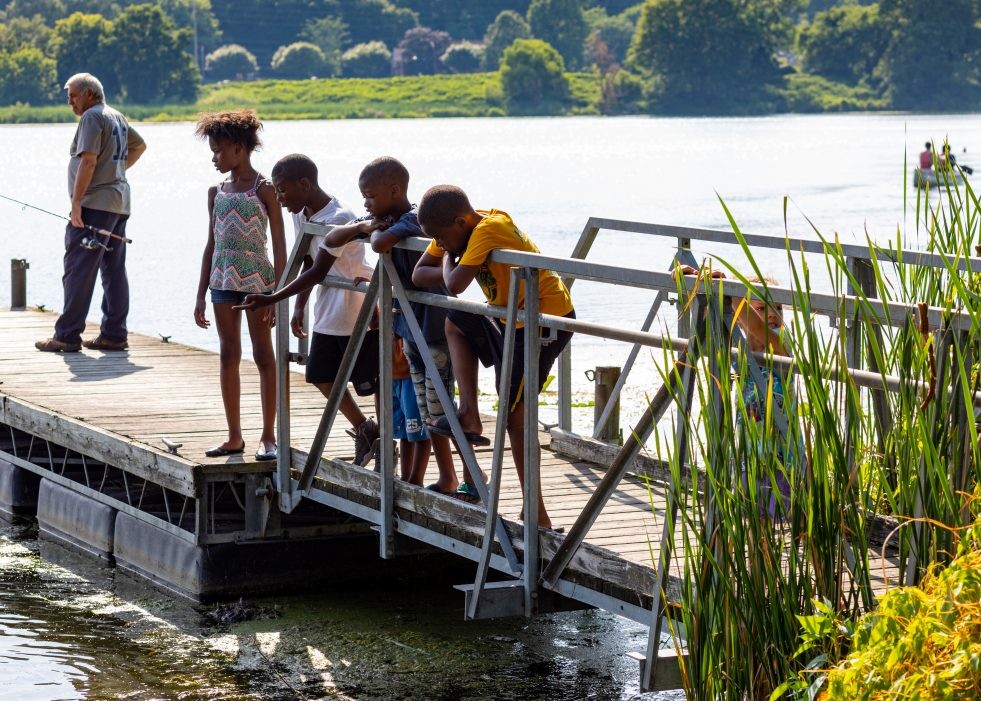 Following on last year’s prototypes, this spring and summer, Akron Civic Commons is doubling down on the elements at Summit Lake that were most successful. We are following up with permanent investments like a permanent shelter, boating, and a trail around Summit Lake, and increasing the frequency of programming brought back by popular demand. Through the advancement of all of these relationships, Summit Metro Parks, the countywide parks organization, has announced that it will restore the pump house into a permanent home for nature-based programming on the shores of Summit Lake.

While there remains a minority of skeptics, many of the residents and community stakeholders, like Star, are ready for more. 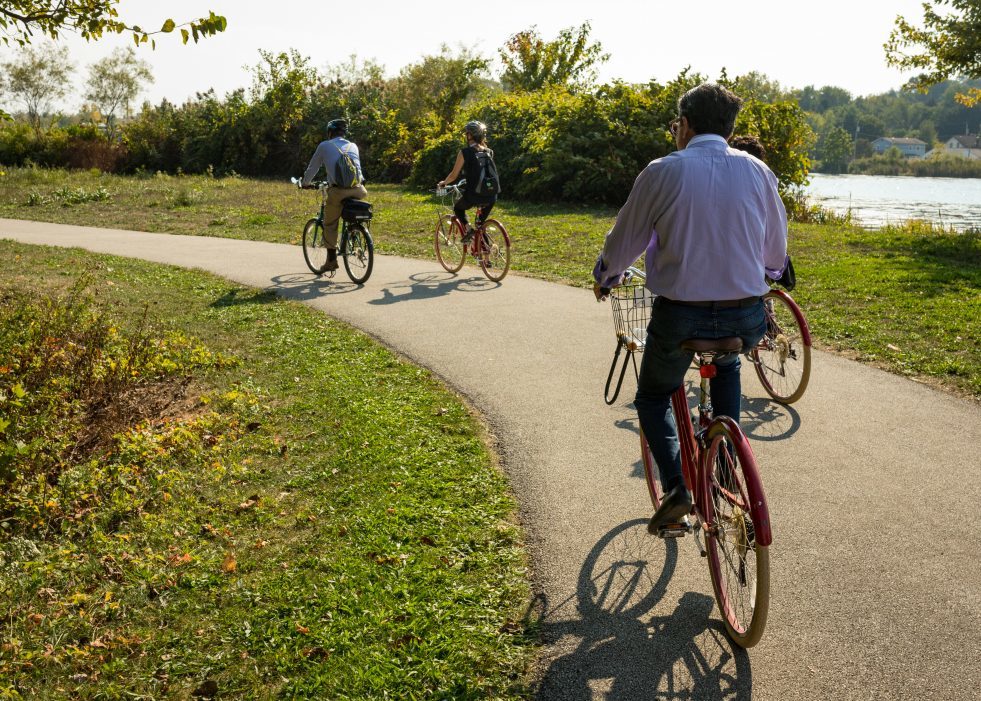 Reflecting on the past two years of work through the Akron Civic Commons offers some key lessons for building trust through local action:

Process is just as important as product.

While the upgraded lakefront park is important, the process is equally so. It is through this process of reimagining our shared assets—by listening, co-creating and co-stewarding, testing ideas and following on with permanent investments—that we are nurturing new relationships and fostering trust in communities. While a discrete project may end, relationships continue, and the trust developed can be transferred to other community efforts.

Viewing civic engagement as both an input and an outcome drives a different approach.

Public space investments often include a period of public engagement, but it often arrives accompanied by a “check the box” mentality that misses the real value of engagement. When civic engagement is viewed not only as an input to a project, but also as an outcome of the work, the approach is paramount to cultivating sustained public life, stewardship, advocacy and trust.

Collaboration can set the stage.

One of the strengths of our Akron Civic Commons project is the diversity and experience of our core team, with a good balance of race, gender, experience and ages and representatives of government agencies, education, funders and non-profits. And the team continues to grow and strengthen over time. With a focus on shared outcomes, individual organizations are coming together to share their strengths and organizational superpowers while acting on the civic commons principles throughout their daily work. Working together in this manner is transforming competitors into collaborators and fostering trust across organizations. 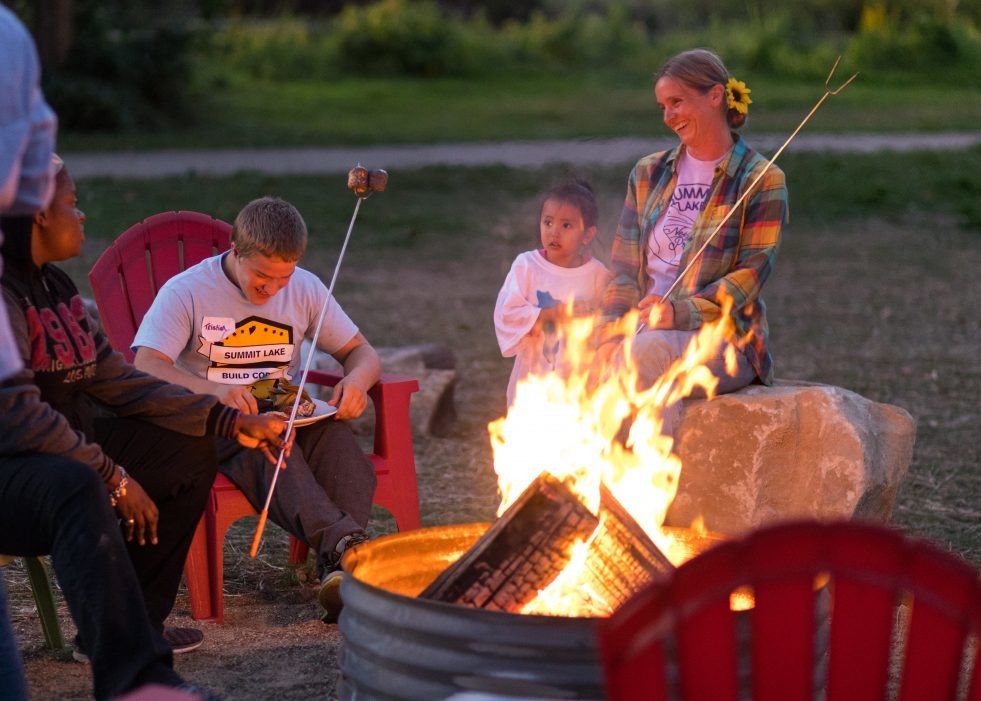 More than anything else, we have seen that the work of Reimagining the Civic Commons affects our team and our residents in personal, life-changing ways. As we begin to use this way of working – of listening with intent followed by co-creation in other Akron neighborhoods – we are changing the way of doing business in Akron by putting trust at the heart of community investment.