Finding Success in the 21st-Century Community

Kate Meis is Executive Director of the Local Government Commission, a nationally recognized leader for livable communities focused on connecting local leaders, implementing innovative solutions and advancing smart-growth policies. Meis was recently recognized by the Chronicle of Philanthropy for her work on climate change as one of the ‘40 under 40 Young Leaders Who Are Solving the Problems of Today — and Tomorrow.” For more info about the LGC: lgc.org

More people live in cities – whether in the urban core or surrounding suburbs – than in rural areas. In 2007, for the first time in history, the world’s urban population exceeded its rural population.

The takeaway: We’re going to see an increased demand in all areas of urban infrastructure and public services, including intertwined impacts on education, transportation, housing, water and public health. Accommodating this growth will require dramatic shifts in the way we plan communities, and much of those efforts will take place at the local level.

But their ability to respond at a level commensurate with the need is inhibited:

Despite these fiscal obstacles, we can and must respond to growing urbanization. We have to act in a way that reduces pollution and increases community resilience – starting now. Communities must be much more creative, and every public dollar spent must achieve multiple goals and leverage additional resources.

Climate change has been called the biggest threat of our generation – posing significant risks not just to our health, but our economic prosperity too. A 2015 Citigroup report estimated that the estimated cost of inaction on climate change is set at $192 trillion over the next 25 years. The “action” scenario costs slightly less – $190.2 trillion – thanks to the rapidly falling cost of renewables and energy-efficiency improvements.

As the environmental and economic evidence mounts, the climate-response message is taking root. A landmark climate agreement was signed by 195 nations in December 2015 at the Conference of Paris (COP21). Each nation will submit and report on emissions targets with the goal of cutting greenhouse gas emissions to a level that will limit the global average temperature to a rise “well below” 2C (3.6F) – a level deemed to be dangerous to the point of threatening life on Earth. 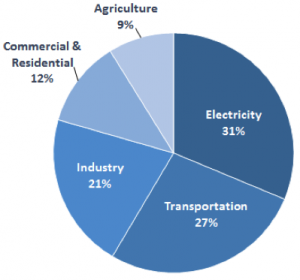 At the nexus of meeting the needs of growing cities while addressing climate-change impacts are transportation and energy. The electricity sector makes up 31% and transportation 27% of greenhouse gas emissions.

However, when you consider that the primary source of greenhouse gas emissions in the industry, commercial and residential sectors also come from fossil fuels burned for energy or heat, you can see that innovations in powering our transportation and buildings will have a significant impact on the intersection of growing urbanization and emerging environmental challenges.

Communities and corporations who understand this significant connection recognize there is a tremendous opportunity to be at the forefront of new clean/green economy initiatives.

In transportation, companies have found large untapped markets and are advancing initiatives with substantial fiscal success and the potential for significant community and environmental benefits.

For example, Uber is running a $40-billion organization without any cars at a time when transportation funding (in real dollars) is at an all-time low.

Car-share companies are picking up on changing preferences, and using technology to connect people to their destinations, to transit (by filling first-mile/last-mile needs) and to other riders through carpool services.

While astonishing, this should be now surprise given the pent-up demand from one of our largest generations. Millennials have the lowest percentage of people who like driving than any other generation: 83% of Millennials like walking, and they also have a much higher percentage of transit use (40% took transit last month). 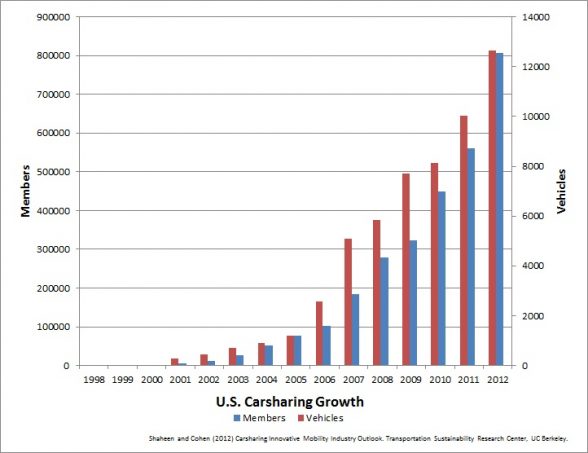 Ingenuity in the transportation sector is critical. Because our growing population is travelling on roads in severe need of repair, we need to implement solutions to get more people out of cars and assure cars on the road are carrying more passengers. To put one price tag on the problem: It would take and estimated $533 billion to expand roadways and relieve severe congestion in U.S. urban areas.

Currently, 80% of seats on the road are empty, and 5.5 billion hours are wasted by Americans each year due to road congestion. Fewer than 50% live within a one-quarter mile walking distance of a transit stop.

More than 20% of their rides in the San Francisco Bay Area start or end near a BART or Caltrain stop, according to Lyft. Lyft Line (their carpool service) makes up more than 50% of its rides in San Francisco; and 90% of Lyft rides have someone else taking the same trip within five minutes (highlighting a potential for increased carpooling).

Lyft has been operating their Lyft Line carpool service for only one year in SF, and 50% of their rides are carpool. They are at about 3% of current mode share and have grown 1% in the last year. Twenty percent of Bay Area Lyft rides start or end near major transit lines.

At a time when funding to operate and maintain (let alone expand) existing roadways and transit lines is diminishing, local governments should look to shared-mobility platforms as an opportunity to leverage private-sector investment and a growing market to achieve community goals.

Growing populations, paired with increased temperatures from climate change, will create major stresses on our electricity grid and result in increased greenhouse gas emissions if we don’t make significant investment in energy efficiency and renewable energy.

Property Assessed Clean Energy (PACE) can help achieve climate goals by providing financing for energy-efficiency, renewable-energy and water-conservation improvements that is repaid (through the energy savings) on a building owner’s property tax bill. Communities invest their own funds strategically by creating PACE programs or partner with private PACE providers to fund energy projects in their communities without the upfront cost or liability.

With approximately $200 million in commercial projects and more than $1.2 billion in residential projects funded, PACE has already had a substantial impact on greenhouse gas emissions, energy and water consumption, and indoor air quality. PACE is one of the most effective ways to finance solar and energy-efficiency improvements needed to achieve greenhouse gas reduction targets and renewable portfolio standards.

In Connecticut, for example, a $1.5 million solar PV project financed with PACE led to a greenhouse gas reduction of over 3,000 MT — equivalent to taking 632 cars off the road.

In California alone, HERO – the state’s largest PACE provider – is in over 367 cities and available to more than 75% of California’s housing units. HERO has helped to create more than 7,500 jobs, funded more than 38,000 residential projects, and provided more than $875 million in financing to homeowners.

Necessity breeds innovation. Many communities are now at a point where addressing growing populations and acting on climate change are inescapable, with opportunities inextricably linked.

These solutions can’t focus solely on what we need to give up, however. We want to end up with something better. We want to fight for something, not just against something. We need a vision that’s worth working toward, rather than an approach aimed at simply holding back negative impacts. By establishing new partnerships across jurisdictions and between the public and private sectors, local governments can optimize community benefits from limited resources – from shared mobility to zero-net energy buildings. We can, and must, plan for a tomorrow that’s worth working for together today.