The Devil is a Local Call Away: Cities, the Arts, and Misunderstanding “Decay”

Blair Ruble is a Distinguished Fellow and former Director of the Woodrow Wilson Center’s Urban Sustainability Laboratory. His book, Washington’s U Street: A Biography, examines the challenges of gentrification in Washington, D.C.

At the height of the Cold War, Soviet wags loved to tell ironic tales about their political leaders.  Communist Party General Secretary Leonid Brezhnev inspired a number of particularly endearing stories which always somehow related to his being slightly at sea in the middle of world events swirling around him.  One such anikdot pitted the witless Brezhnev against a wily Richard Nixon.

Brezhnev and Nixon, it seems, were meeting in the White House when the American President decided to call God for advice.  He summoned an aide, who brought a large white phone.  A few moments after he had completed his consultation with the Devine Being, another assistant came in with a receipt.  Nixon approved the bill of some $20 million for the call.

Flying back to Moscow, a furious Brezhnev inquired of the cowering Red Army officers how it was that the Americans could call God, and he could not.  He demanded that the entire Soviet military research complex dedicate itself to establishing phone service with God. 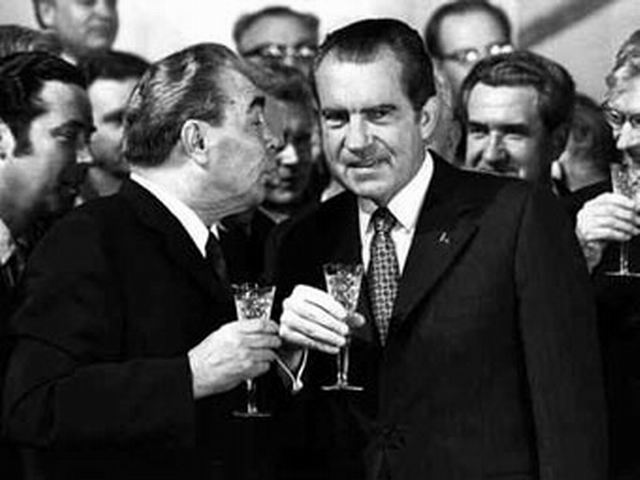 A few months later, it was time for Nixon to visit Moscow.  The two leaders sat in Brezhnev’s Kremlin office. At a critical juncture in the negotiations, Brezhnev summoned an aide, who brought an even bigger red phone than the white one that Nixon had used in the Oval Office.  Brezhnev dialed a number and had a brief conversation.  A few moments later, an obsequious aide shuffled into the meeting with a receipt for just two kopecks (or .02 rubles).  Brezhnev was pleased, but perplexed.  Why, he asked his assistant once the Americans had departed, had it cost Nixon $20 million to place his call, but he, the Communist General Secretary, had to pay only two kopecks? The subordinate quickly responded, “Because calling the Devil from Moscow is only a local call.”

The very Moscow in which Hell was just a local call away happened to be one of the planet’s most creative cities at that moment in history.  Internationally acclaimed authors were penning their best works; noble ballerinas trained; world class actors perfected their craft; perhaps the greatest collection of mathematicians in recent centuries thought.  Brezhnev’s Moscow was the headquarters and command center for an ideological empire that extended to nearly every continent; it oversaw massive military and prison kingdoms of a previously unknown scale; it stood at the center of an enormous hinterland covering a dozen time zones. Clocks from Prague to Pyongyang marked Moscow time.  People of vast differences came and went every day; they jostled on streets which, indeed, resembled various visions of Dante’s Inferno from time to time.  Moscow under Brezhnev underscored the reality that virtue and creativity do not necessarily coexist.

But Moscow wasn’t just any place; it was one of the largest cities in the world.  How did it’s “urbanness” matter?

Order within a metropolitan region is the result of the accumulation of layer upon layer of social, economic, cultural, and political sediment.  For the vast majority of inhabitants, much of what takes place in a city seems spontaneous.  To the extent that conscious rationality determines a city’s fate, it appears as a sum of the rationalities of its constituent parts.  This process of city building is particularly exposed at moments of great societal transformation, such as that which occurred following the implosion of the Soviet Union and the emergence of a new market-oriented economic system in Russia.

Cities, because of their density and diversity, are a natural environment for a distinctive sort of cultural creativity – the creation of beauty in the midst of ugliness. Urban decay certainly is not the only stimulus for humans to try to step out of themselves to add a note of splendor to the world; nor are cities a unique venue for creativity.  But cities are places in which people who often can barely tolerate one another crash together while coming and going to their homes, apartments, places of worship, doctors’ offices, funeral parlors, restaurants, cafes, bars, theaters, stores, stadiums, and schools. Because they must co-exist with one another, they must create new ways of being together.  Such cities at such moments in history reflect a core commitment to create something new.

The urban experience in inherently contradictory and conflict-ridden places and times such as Brezhnev’s Moscow are the urban wetlands of our lives. Like wetlands in the natural environment, such mixing bowls of urban diversity often appear to outsiders to be little more than wastelands. They are the first places to be rebuilt, redesigned, reconceived, and reconstituted when “reformers” think about “improving” how we live.  Yet this is a terrible mistake. Like wetlands, a city’s jagged edges are among the most productive corners of our environment.  Like wetlands, cities must be revitalized from time to time for them to continue to enrich society at large.

Such cities at first glance may appear to be centers of conflict and despair, yet they simultaneously can become places for social healing.  This is where the human urge to create enters in.  The most successful cities encourage creativity to transform emotions into new forms of being.  Music, the visual and performing arts often can reveal more about the richness of a particular moment than data run through infinite algorithms.  As the noted South African urban observer Edgar Pieterse argues, if you want to understand why the city is important, “tune in to the beats” of urban creative invention.