Connecting the Dots Towards Well-Being

Every year, the U.S. Census Bureau fields more than 130 surveys, collecting literally hundreds of millions of data points that tell us how people in our country of nearly 320 million are faring. This is not counting other public, non-governmental and private data collection, from universities to marketing firms to tech companies. The growing availability of data is a boon for social science researchers, but making the scads of statistics result meaningful to a wide audience is challenging. This task—breathing life into numbers, drawing out the human stories that the data tell, and using those stories to inform dialogue and promote better policies—lies at the core of Measure of America’s work. In pursuit of this goal, we have learned a few lessons.

Information has never been as plentiful and accessible as it is today, yet important social issues often go unnoticed. Open and plentiful data, while necessary, is far from sufficient for a society to see, let alone understand and address, gaps in well-being and opportunity—even in a wealthy, technologically advanced country like the United States. Stimulating fact-based conversations around well-being and opportunity begins with providing data, but it can’t end there. The relationship most people have with numbers and statistics is a cold and distant one. While feeling connected to data sounds comical, there is a case to be made for bridging this rift between data and emotion. If data point us to the most pressing poverty, inequality, social, environmental, and other issues in our society, how can we take the next step and get others to care and to act?

Breathing life into numbers means creating connections—between data points to tell stories, between partners to create relationships, and between diverse sectors to maximize the positive impact of well-being initiatives. DATA2GO.NYC, Measure of America’s data-mapping tool for New York City, exemplifies this philosophy of making connections. The concept of the tool itself is to bring together data collected from different sources, at different levels—federal, state and local—and across different sectors, in a platform that facilitates storytelling and encourages users to explore how different factors like housing, health and education, among many others, are related to others such as crime, the environment, and employment.

DATA2GO.NYC continues to be shaped by collaboration with subject experts and those on the ground who know their communities intimately. For example, in partnership with the Human Services Council, MoA is holding a “mini-portraits” of New York challenge, in which local human service delivery organizations, together with local residents, are creating portraits of their communities that illuminate a particular issue using data from DATA2GO.NYC. These data-based portraits will take a deep dive into a range of issues, among them gaps in early childhood care for non-English speaking families, the low rates of physical activity among Asian American seniors, and a video by teenagers that expresses their vision of how their community can thrive amid rapid gentrification.

Another example is interactive workshops on DATA2GO.NYC that our team provides with organizations around the city, which provide them with a comprehensive tour of the tool and us with feedback on how organizations use it and how we can make DATA2GO.NYC even better.

The collaboration between those with the bird’s-eye view data provides and those on the ground who can use the data to make change is essential to ensure that statistics don’t just sit in servers. For his annual State of the District event, for example, New York City Councilmember Robert E. Cornegy, Jr. used Data2Go.NYC to identify some of the strongest assets and most serious challenges faced by residents in Brooklyn’s Bedford Stuyvesant and northern Crown Heights and organized an event as a call for action. The rate of home fires is very high, so he brought in the Fire Department of New York and Red Cross to distribute free smoke detectors. Voting rates are very low, so the district partnered with the NAACP and others to increase voter registration.

Beyond our collaboration with others, the design of the tool is deliberately meant to foster cross-sector collaboration by presenting data from different sectors side by side. A map of public housing locations alone may be informative. But a map of public housing locations overlaid with the prevalence of child asthma hospitalizations can illustrate and give validity to the story many New Yorkers in public housing experience—asthma attacks triggered by mold, cockroaches and decaying infrastructure, and neighborhoods more likely to be located near waste transfer stations, bus depots and other facilities that contribute to poor air, exacerbating the likelihood of an attack. Placing these data on a single platform where they can be overlaid and correlations can be tested encourages users to explore data and collaborate beyond their narrow areas of expertise. What is typically seen as a health issue may be more effectively addressed if it’s also considered a housing issue, for example. 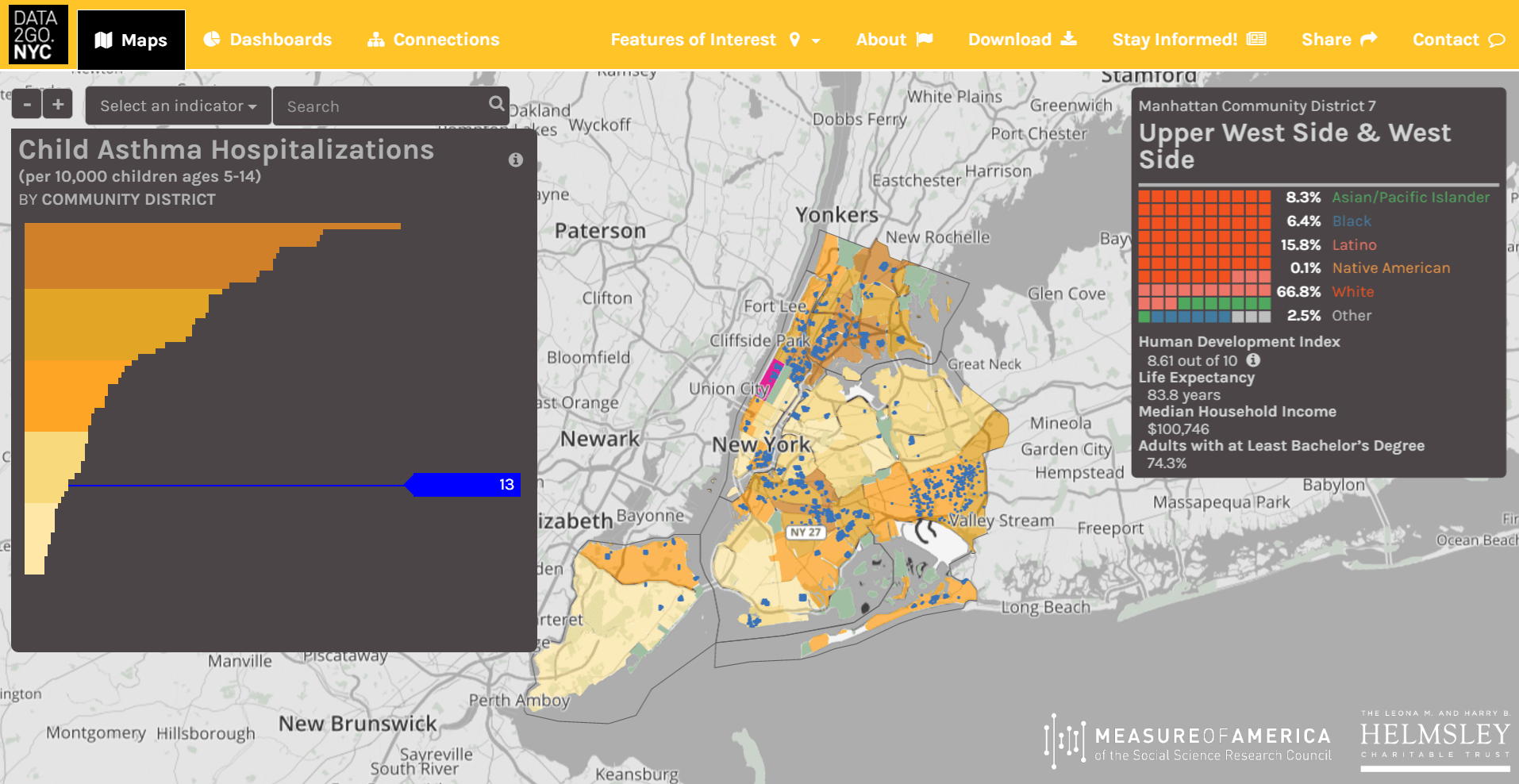 DATA2GO, with its multiple visualization options and 360+ indicators, provides a nuanced palette to paint the pictures of the thousands of New Yorks that make up this great city in factual, detailed ways. Without active, engaged users, DATA2GO.NYC is a passive repository of data. With them, it is a rich, responsive tool for understanding and change-making. DATA2GO.NYC depends on its users engaging meaningfully with the data—bringing knowledge and curiosity, looking for connections, remaining open to learning and challenging assumptions, and most importantly, telling stories.

Data, on its own, does not automatically lead to understanding, let alone to action. Creating connections is what ultimately can leverage the data to bring important social issues to the fore, influence funding decisions, and inform policies for positive change. 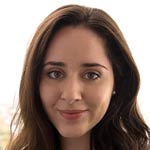 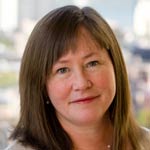 Kristen Lewis is Co-Director of Measure of America. Before founding Measure of America, Kristen was senior policy advisor to the water and sanitation task force of the UN Millennium Project. She previously worked at the United Nations for many years, first with UNIFEM and then as in UNDP’s policy bureau, and has served as a consultant on gender equality issues for numerous international development organizations, including UNICEF and UNFPA. She received a Master in International Affairs degree from Columbia University. 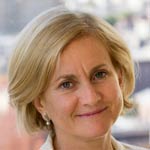 Sarah Burd-Sharps is Co-Director of Measure of America. Prior to this position, Sarah worked for the United Nations for over two decades, with a focus on economic empowerment, democratic, governance, and gender equity. Before she left the UN in 2007 to found Measure of America, she was Deputy Director of the UN Development Program’s Human Development Report Office, where she led the UN’s work on national human development reports on every continent. She received a Master in International Affairs degree from Columbia University.

Since the Great Recession of 2008, the housing wealth gap has expanded to include not just Black and Brown Americans, but younger White Americans as well. Millennials and Generation Z Whites are now joining their Black and Brown peers in facing untenable housing precarity and blocked access to wealth. With wages stuck at 1980 levels and housing prices at least double (in inflation adjusted terms) what they were 40 years ago, many younger Americans, most with college degrees, are giving up on buying a home and even struggle to rent apartments suitable for raising a family.

What makes it hard for policy people and citizens to accept this truth is that we have not seen this problem in a very long time. Back in the 1920s of course, but not really since then. But this is actually an old problem that has come back to haunt us; a problem first articulated by Adam Smith in the 1700s.

Multi-modal Transit and the Public Realm

More than ever, urban transit services are in need of sustainable and affordable solutions to better serve all members of our diverse communities, not least among them, those that are traditionally car-dependent. New mobility technologies can be a potential resource for local transit agencies to augment multi-modal connectivity across existing transit infrastructures.

We envision a new decentralized and distributed model that provides multi-modal access through nimble and flexible multi-modal Transit Districts, rather than through traditional, centralized, and often too expensive Multi-modal Transit Hubs. Working in collaboration with existing agencies, new micro-mobility technologies could provide greater and seamless access to existing transit infrastructure, while maximizing the potential of the public realm, creating an experience that many could enjoy beyond just catching the next bus or finding a scooter. So how would we go about it?

The Forging Freedom Portal is a one-stop shop where a police officer planning a victim-centered operation can connect with their law enforcement counterparts, and the right service providers ahead of time, collaborating to make sure they’re planning for the language skills, social services, and legal support that victims may need. The portal is a place where the people who care most about ending human trafficking, who are doing the hard work every day on the ground, can learn from each other and share best practices to raise the collective standard of this work.