Bringing Back a Downtown

Alicia Gallo is a graduate of Mills College and a former AmeriCorps member through the Local Initiatives Support Corporation (LISC). As outreach coordinator for RMSI, she manages the organization's volunteer, vendor, and donor engagement programs, social media presence, and promotional strategies. She also volunteers as a writing coach with Writer Coach Connection and an expert weed puller at Happy Lot Farm and Garden.

Richmond, CA – Macdonald Avenue, the historic main street of this San Francisco Bay Area city, is on the verge of a renaissance. Residents and workers are hungry for the return of amenities that are crucial to creating and maintaining a thriving commercial district: restaurants, shops, and venues for arts and culture. Now, after 15 years of hard work, Richmond Main Street Initiative is utilizing every tool and opportunity to realize the revitalization of Downtown.

The Story of the City of Pride and Purpose

The history of Richmond and its Downtown is one that is familiar to many American cities born in the industrial age. Founded and incorporated in 1905, Richmond’s developed landscape and economic vitality was defined by a few key industries that still survive today. 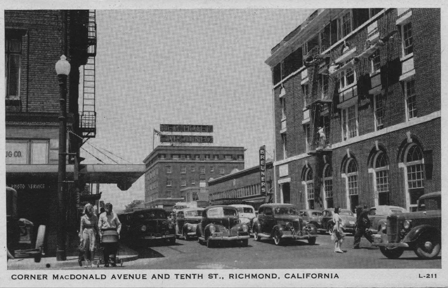 With industry came workers and residents, and the establishment of Macdonald Avenue as the commercial, civic, and recreational heart of Richmond. In the 1940s, the area experienced a “second gold rush” as tens of thousands of new workers employed by the Kaiser Shipyards settled into wartime housing and flocked to Downtown to satisfy all their shopping and entertainment needs.

Post WWII Richmond witnessed changes in demographics, economics, and development philosophies that resulted in a shift away from Downtown. In 1968, rising racial tensions influenced by decades of segregation practices culminated in violent protests, many of which took place on Macdonald Avenue.

The ramifications of these demonstrations and suburban development policies resulted in a powerful change for Downtown: once seen as the center of town, Macdonald Avenue became a street to avoid. Department stores and banks moved to the new Hilltop Mall, many small businesses closed, and Main Street and its residents suffered.

Although neglected, Downtown was never forgotten.

Recognizing the myriad social and economic benefits of a thriving Downtown district community members and City leaders came together in the late 1990s to reclaim Richmond’s rich heritage and historic Main Street. With financial support from the Richmond Community Redevelopment Agency and the Local Initiatives Support Corporation, Richmond Main Street Initiative was established and the work to bring back Downtown began.

As a certified Main Street organization, Richmond Main Street Initiative follows a four-point revitalization model. Over the years we’ve customized our approach to develop initiatives that reflect the needs of our community. 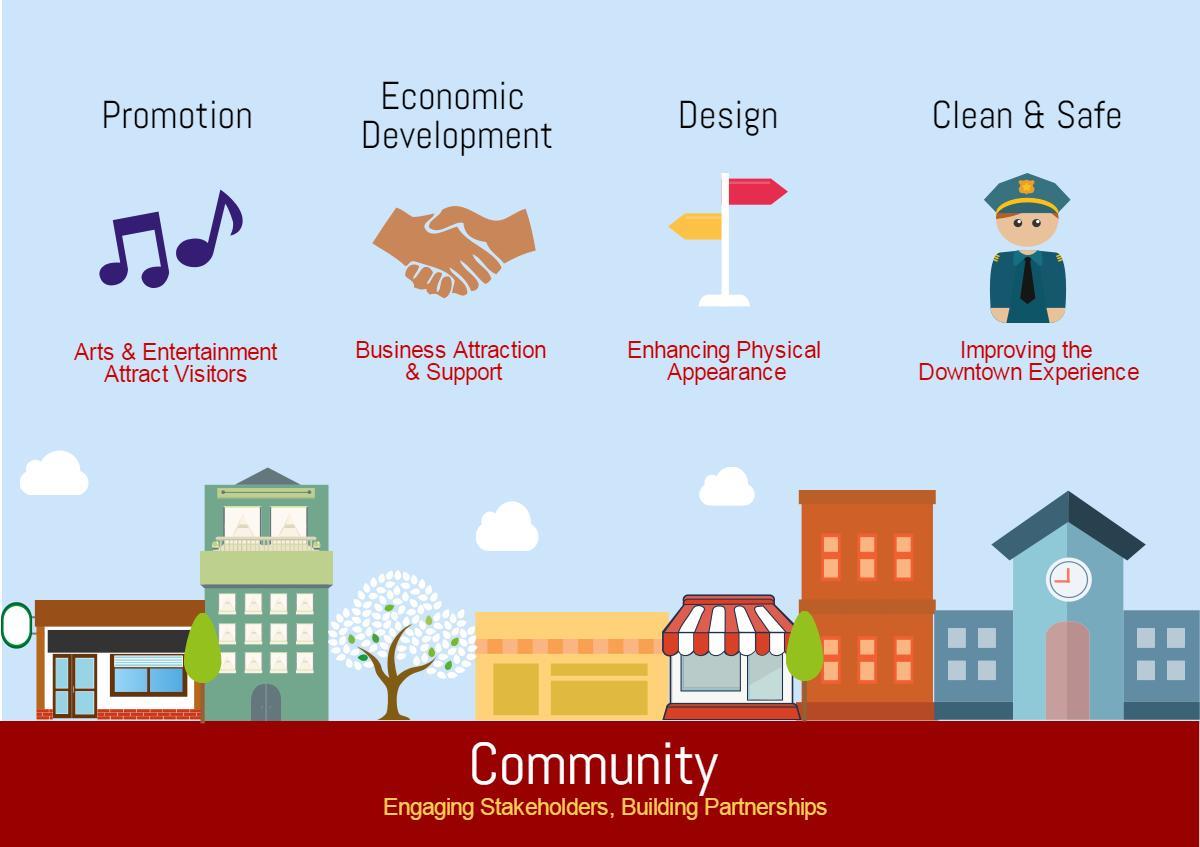 Years of trial and error, creative strategies, and strong leadership are starting to pay off: Downtown is, once again, emerging as a focal point for arts, entertainment, and business. In 2014, for example, Richmond Main Street events attracted 20,000 visitors to Downtown and 12 new businesses opened. Building on the successes of previous years, current projects for Downtown reflect the community’s desires, needs, and assets.

At the top of the list is attracting new businesses, especially sit-down restaurants and casual eateries. Restaurants and retail businesses are crucial components of a healthy, vibrant neighborhood, creating jobs and tax revenue that benefit the entire community. 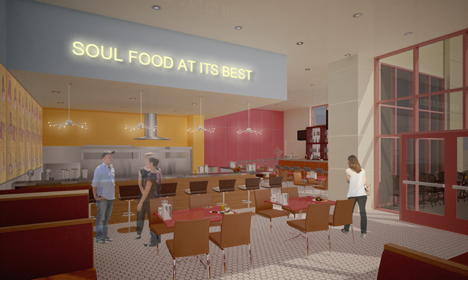 Artist rendering of Home of Chicken and Waffles restaurant in Downtown Richmond.

Achieving this goal presents a unique set of challenges, namely the low number of “move-in ready” retail spaces, high start-up costs, and lingering negative perception of Downtown. As with many grassroots development projects, we know that finding one or two courageous entrepreneurs willing to invest in establishing a cornerstone enterprise is crucial.

We’ve found one of these pioneers in Home of Chicken and Waffles, a local soul food restaurant looking to open a third location. After taking a tour of Downtown, we formed a partnership and set our sights on realizing the establishment of this anchor business. We began by facilitating lease negotiations between the restaurant group and the property owner—a process that took nearly a year. With the lease agreement signed, we have moved to the next step of this project: an Indiegogo crowdfunding campaign to assist with the build-out of the restaurant and the many benefits it will create.

Another barrier to attracting businesses to Downtown is access to affordable, quality technical assistance and capital investment opportunities for entrepreneurs. We work to address this need by acting as a Kiva Zip trustee and partnering with our local small business development center to sponsor workshops and classes.

The Rich City Rides Community Shop is a product of our commitment to supporting entrepreneurs. Six months after completing our 14-week business planning course, Najari Smith—executive director of Rich City Rides—opened his shop, simultaneously breathing life into a vacant storefront and fulfilling the community’s need for a bike shop. A few months later, the shop also became our first Kiva Zip success story: crowdfunding a $5000 loan in only 8 days.

The success of our work is reflective of the power in utilizing Downtown’s assets:

Our annual arts and culture activities draw on all these assets, simultaneously attracting thousands of visitors to Downtown, supporting the local economy, and changing the perception of Main Street.

The Challenges of Perception & Perspectives

Despite the progress that Downtown has made, overcoming the negative perception that many have about Richmond remains our greatest ongoing challenge. Would-be visitors and investors still see Richmond as a city plagued by violent crime, with a Downtown district frozen in time. As a result, both groups often avoid the area.

The lack of investment, in particular, has had a negative impact on the quality of life for Richmond residents. Studies conducted by the City of Richmond show that 85% of residents’ disposable income is spent outside the city—a sobering demonstration of both the cause and effect that years of slow development have had on our neighborhoods and residents. 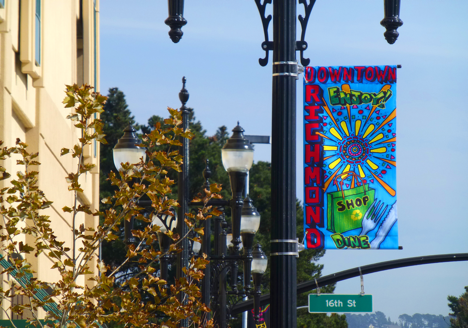 The reality, however, is much different. Through years of hard work, community policing practices, and innovative crime prevention programs, overall crime in Richmond has dropped to record lows, with criminal homicides the lowest since 1971. And crime in the Downtown district is down thanks in large part to our strong partnership with the Richmond Police Department, as well as our commitment to keeping Downtown clean and safe.

Recent investments and development projects spearheaded by the city and former redevelopment agency have made significant upgrades to the look of Downtown: streetscape improvements to Macdonald Avenue, affordable housing near the transit station, and renovation of the historic Winters Building, to name a few.

The elimination of the redevelopment agency in 2012 prompted us to become more creative and actively involved in the revitalization of Downtown. We rallied stakeholders and formed a business improvement district, which currently funds daily cleaning and hospitality services, special events, and business attraction efforts.

Breaking through the popular narrative of Richmond and dispelling the myth of violence is difficult. Nevertheless we are optimistic about the future and confident in our approach. As we continue to foster strong relationships, cultivate entrepreneurs, attract investment, and bring people to Downtown, Macdonald Avenue and the community it supports will once again blossom.