Beyond Demographics: A New Way of Looking at Cities

An innovative set of polling questions about Philadelphia offers a different perspective for crafting urban policy.

For all communities, but especially for post-industrial cities such as Philadelphia, increasing the number of residents is necessary to expand the local economy, broaden the tax base to support infrastructure, and draw new employers seeking a skilled workforce.

But to keep cities growing, it’s crucial not only to attract new people but to retain current citizens as well. So the development of urban policy depends on understanding a city’s residents—their hopes and desires their concerns and complaints.

The Pew Charitable Trusts’ Philadelphia research initiative has developed a new way of looking at our hometown’s citizens that goes beyond the usual parameters that pollsters use: age, race, income, political affiliation, education level, etc.

With a series of specially designed questions and a technique known as cluster analysis, we created four categories of Philadelphians based on their attitudes toward the city. Here’s who they are and what they represent: 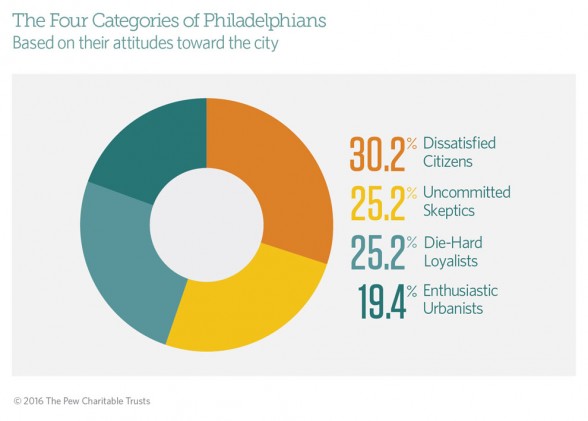 Dissatisfied Citizens: These people tend to be unhappy with their neighborhoods, disenchanted with Philadelphia’s government, and not terribly optimistic about the city’s future. They represent about 30 percent of the population and are disproportionately low-income; most have lived in Philadelphia their whole lives but would move out if they could.

Uncommitted Skeptics: This group doubts the effectiveness—and questions the goals of—local institutions, such as the business community, police department, and city government. These skeptics make up 25 percent of Philadelphia’s population and feel little attachment to the city.

Die-Hard Loyalists: These are the people who see a bright future for the city and want to be part of it. They feel connected to their neighbors and think more should be done to preserve city neighborhoods and support longtime residents. They account for 25 percent of the city’s population, and many are lifelong Philadelphians.

Enthusiastic Urbanists: This group, excited about Philadelphia and its future, is made up of people who view Center City as vital to the city’s well-being and believe that Philadelphia must attract new residents to thrive. Making up 19 percent of residents, many are newcomers to the city.

It’s troubling that almost a third of the city’s residents are “dissatisfied.” But it may not be surprising: Of the country’s 10 largest cities, Philadelphia has the highest percentage of people living in deep poverty (defined as an income at 50 percent or less of the level used to define poverty). Many Dissatisfied Citizens lack the wherewithal to pick up and move to a new place and understandably could feel trapped—a situation that only heightens the need to create new, sustainable jobs.

But despite Philadelphia’s persistent poverty, we also know that in recent years, the city has made great strides, developing a world-class reputation for arts and culture and becoming an alluring tourist destination. The city’s strong tradition of excellent universities continues, notably in medical education, and it remains a relatively affordable place to live especially compared with other large cities on the East Coast. The city’s population—which peaked at 2.1 million people in 1950 before dropping by more than 550,000 over the next 50 years—has now begun to slowly grow again.

We learned from our research that a quarter of the city is made up of Die-Hard Loyalists, nearly all of whom say they hope to spend the rest of their lives in Philadelphia. And, in another sign of how far the city has come recently, about a fifth of its population consists of Enthusiastic Urbanists—the wealthiest and best-educated of the four groups, consisting of people who like what they see happening in Philadelphia and want to stay.

That’s why it’s so intriguing that a quarter of the city’s residents are Uncommitted Skeptics. Although 6 in 10 of them call Philadelphia an excellent or good place to live, they’re still the people least connected to the city—with nearly all of them telling us they would leave if the right circumstances came along, and more than 40 percent saying they don’t expect to be living in Philadelphia in five or 10 years. Most of them are young, well-educated, and in decent financial shape, so they could go easily.

For Philadelphia to thrive, it needs to build new bonds with these people—whose demographics (43 percent black, 39 percent white, and 10 percent Hispanic) pretty much match the city as a whole—and overcome their skepticism.

What Philadelphia Needs to Do Next

The good news is that even a majority of skeptics say they believe Philadelphia’s best days are still to come; among the four groups, only the Dissatisfied Citizens disagreed.

And the four groups agreed on the most important issues facing Philadelphia, with majorities in each group saying that improving K-12 education, creating jobs, and addressing concerns about public safety should be the top priorities for city leaders.

Fixing any of these long-standing problems, much less all of them, won’t be easy. But agreement on defining the problems should help us make progress toward finding solutions, especially if two-thirds of the city’s population is optimistic about the future.

One thing we’ve learned from this new way of looking at city residents is this: The future of Philadelphia, and cities like it, depends on attracting more Enthusiastic Urbanists, nurturing the Die-Hard Loyalists, convincing the Uncommitted Skeptics, and creating a thriving community to win over the Dissatisfied Citizens.

For more information and to read The Pew Charitable Trusts’ full report on this topic, click here.

This article was originally published by Meeting of the Minds on November 16, 2016.