If planned and promoted well, buses, trains, and bikes can be tremendous resources for how we’ll get around in the future. For now, the U.S. has invested in an almost entirely car-dependent country.

To bridge the gap, there’s a far under-used sub-sector of the transportation industry that can help these under-rated and under-used travel modes – which also promote better health, happiness, and efficiency – catch up.

Starting in the wake of the OPEC oil embargo, government agencies tried to reduce the number of cars on America’s highways by incentivizing people to carpool and take fewer trips driving alone. This was a practice known by urban planners and traffic engineers as transportation demand management (TDM). This is often lost in conversations about infrastructure, which are about build, build, build. TDM is about understanding the paths people are taking and wanting to take and creating a system based off of that.

TDM, when employed, works. TDM agencies around the country use a treasure’s trove of strategies to get people out of cars and onto trains, buses, and bikes, which is something that has to happen if we don’t want our roads to become unusable due to traffic and environmental congestion.

But one major problem with the practice of TDM is that it has had a hard time making the case that it is a cost-effective alternative or at least add-on to big infrastructure projects. It seems pretty obvious that teaching people, educating them, about how to use our systems will make those systems run more smoothly. But there has never been a great way to back up that assumption with hard numbers.

Arlington County, Va., which operates Mobility Lab, helped secure funding from the Federal Highways Administration to build a way to calculate these benefits. We now have a couple of calculators that cities, regions, or even properties can use to calculate TDM’s economic return on investment, thanks to our work in partnership with LDA Consulting and the Center for Urban Transportation Research at the University of South Florida.

By answering a handful of questions upon entering the online Transportation Cost Savings Calculator – we are presented with information such as, for example: TDM programs in Arlington County – the jurisdiction with the most robust transportation management program in the country – yield an astonishing $5 to $9 in benefits for every $1 spent.

No highway expansion project has that kind of return on investment. In fact, highway expansion projects rarely yield an ROI higher than the cost of construction itself, nonetheless the countless maintenance projects required down the road. So why don’t we invest more heavily in TDM, and the infrastructure needed – like trains, buses, and bike lanes – to make TDM thrive?

One reason: measuring the results of TDM – and how they directly improve people’s quality of life and economic outcomes – used to be really hard.

Unlike highway expansions, TDM strategies are very diverse. High-occupancy vehicle lanes, employee transit benefits, real-time transit arrival information, and showers for bike commuters at the workplace are all examples of TDM programs. Transportation management helps people use the infrastructure that already exists more efficiently, and highway expansion projects – while much easier to measure – will just build more infrastructure that likely won’t do much to fix societal problems. 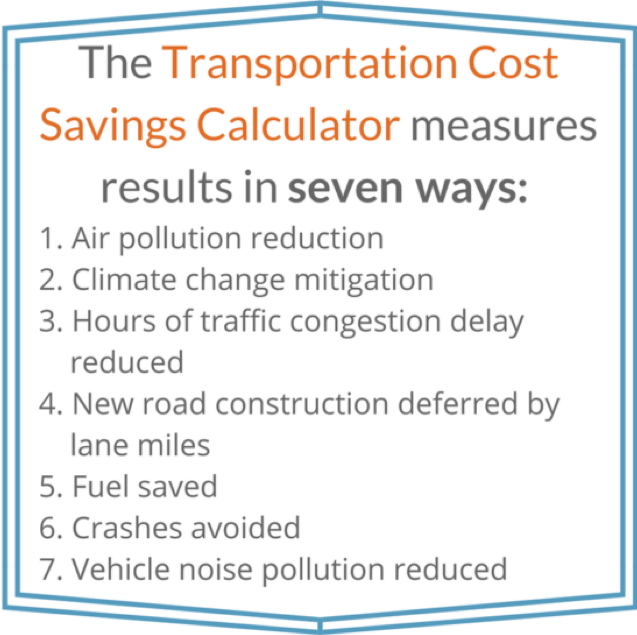 Mobility Lab has been researching TDM for a while. We’re a think tank focused solely on understanding transportation habits and preferences, and figuring out what incentives might influence people to live more sustainable transportation lifestyles. What we’ve learned from talking to transportation management associations around the country is that one of their biggest needs is a tool that quantifies the results from their programs. In a massively car-dependent country like the U.S., any public money that’s not spent on widening roads needs to prove that it’s worth your tax dollars.

The Calculator measures the return on investment from TDM programs in seven ways:

All of these measurable results have a huge impact on people’s quality of life. And, admittedly, there are a lot of factors the Calculators currently don’t measure. For instance, health calculations are not included yet. Imagine how much higher the ROI for TDM – which has a huge component focused on getting people into active forms of travel, such as bicycling and walking – could be once those are more accurately measured within the calculator. We hope to begin incorporating even more meaningful measures soon.

We released the calculator – it’s free to download and use – at the end of last summer. Since then, representatives from nearly 500 government agencies, universities, planning organizations, and private companies from all around the world have already downloaded it. We hope these organizations use the Calculator to show policymakers and those who fund our transportation systems that TDM programs pay themselves off, and are beginning to show a real potential for making all our lives better.