Why the Airport is the Future Hub of Robot Cars

Devin Liddell is the Principal Futurist at TEAGUE. TEAGUE is a leader in travel and technology innovation, blurring the boundaries between digital and physical to create breakthrough products, services, and experiences for a broad range of clients including Amazon, Google, Hyundai, Intel, Microsoft, Rockwell Collins, Toyota, and The Boeing Company.

Autonomous vehicles will eventually make the existing business model of airport parking garages obsolete, something that any taxpayer disinclined toward $100 million annual budget shortfalls should care a great deal about. Ride-hailing services like Uber and Lyft have already put a dent in this critically important source of non-aviation revenue, with many airports reporting soaring passenger numbers and yet flat or declining parking income. This will only get worse when autonomous vehicles eliminate any remaining inclinations to park. But without parking revenue, airports could become a drain on public coffers. And the challenges autonomous vehicles pose to airports isn’t limited to just parking; air traffic itself will also likely be impacted when travelers on short-haul overland routes opt to skip air travel’s pat downs and gate mobs for the freedom and convenience of a robot-driven car, trading speed for a truly point-to-point experience.

Given this existential threat, it’s tempting for airport operators to re-imagine parking garages as all sorts of things, from concert halls and shopping malls to condominiums, marijuana farms, and more. However, there’s a major wrinkle to such ideas: autonomous vehicles won’t show up all at once in some sort of dramatic Day One moment. They’ll arrive gradually, eating away at revenues year-over-year, but imprisoning airport operators with a conundrum: how can you provide some parking if you’ve re-purposed all of your parking? So, any solution will need to be scalable over time. 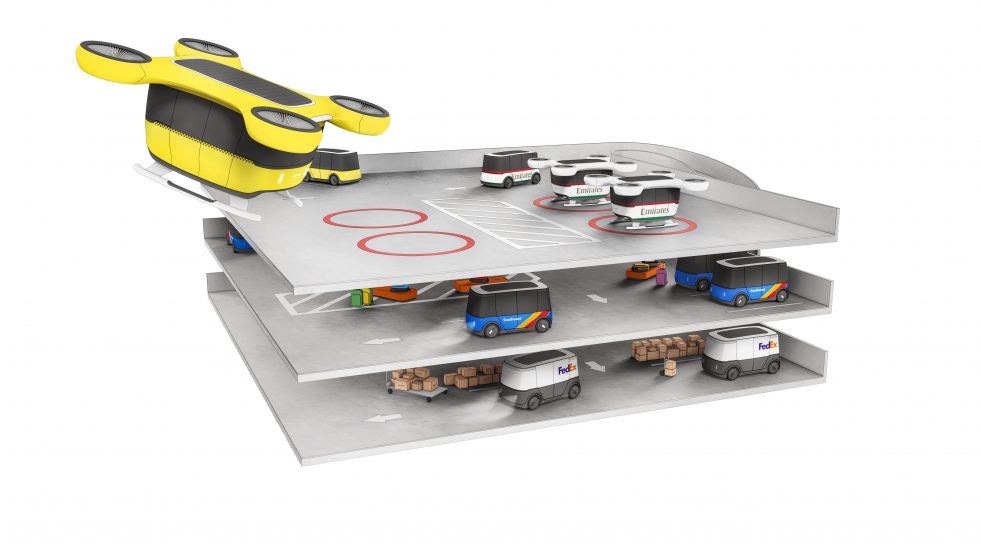 But this scaled transition problem is actually good news, because it points us back toward the solution staring us in the face. First, let’s remember that these structures are made for vehicles. More specifically, they are made for dynamically storing and moving vehicles every hour and day of the year. So, here it is: instead of autonomous vehicles putting airport parking garages out of business, airport parking garages need to get into the business of autonomous vehicles.

Imagine this future for Seattle-Tacoma International Airport, the 9th busiest airport in the United States: by 2030, the airport’s 13,000-car parking garage is home base for the airport’s fleet of all-electric autonomous vehicles. The vast majority of both enplaned and deplaned passengers—all 60+ million of them—are transported to- and from the airport by these fleet vehicles, providing extraordinary value to passengers, airlines, the airport, and the city itself. Here’s how:

For passengers, the benefit is inexpensive (projected to be a highly affordable $0.35 per mile), hassle-free, point-to-point ground transfers. For disembarking passengers, the autonomous airport vehicle even serves as a secure, mobile TSA station, checking documents and screening passengers on the way to the airport—eliminating the time spent parking and in TSA lines. (This will also liberate valuable real estate inside the terminal currently occupied by screening areas.) For arriving passengers, their checked luggage will be loaded onboard while they make their way from the aircraft through the terminal; this will be possible because the autonomous airport vehicle will be a node on the network and knowing which passengers will be using the vehicle means luggage can be connected with that vehicle directly rather than having the passenger idle at an archaic, space-hogging baggage carousel.

For airlines, the autonomous airport vehicle will provide a new source of revenue; even just getting $0.02 of that $0.35 per mile as the lead generator will add up to a nice new business for airlines. Also, as part of this arrangement, the airport could operate vehicles that are branded with the airline’s livery, creating a door-to-door travel experience for passengers. Also, by tapping into the airport autonomous vehicle as a node on the network, airlines will have total visibility into where passengers are beyond just the gate, which could even allow them to experiment with different ways of boarding, which is a totally broken process at the moment, and ripe for new thinking.

For the airport, operating a fleet of autonomous vehicles will easily replicate, and likely exceed, current parking revenues. With as many as 13,000 autonomous vehicles, Seattle-Tacoma International Airport’s fleet would need to generate around just $6,500 annually per vehicle to replicate current revenues. To put that in perspective, reaching the $6,500 annually threshold at $0.24 per mile would only require each vehicle to complete fewer than three roundtrips between the airport and downtown Seattle each day. That’s not a lot and doesn’t even account for the likelihood of trips going much farther afield. Of course, there’s the capital required to build a fleet that large, and other associated costs, including charging, maintenance, etc. But the math for profitability appears very straightforward. It’s also worth considering that Seattle-Tacoma International Airport’s garage, an 8-story facility comprised of 5 million square feet, has a roof, and that roof could be converted into a “fourth runway” once vertical take-off and landing (VTOL) aircraft—or even Zeppelins—enter service.

Intermodal Infrastructure that Brings Airports and Cities Closer Together.

For the city itself, there’s an enormous benefit in integrating intermodally with the airport. In the potential futures presented by autonomous vehicles, there’s the capacity for the airport to become essentially estranged from the city, a faraway piece of infrastructure relegated to long-haul travel, which wouldn’t be a future at all for many regional, non-coastal airports. Having the airport serve as one of the city’s core intermodal hubs draws the airport and city closer together functionally and emotionally. Plus, as cities get bigger and bigger, and cities respond to soaring populations and even the effects of climate change by declaring more and more of their downtowns as car-free zones, the airport is a logical home base for large fleets of autonomous vehicles serving greater metropolitan areas. Airport parking garages are ready-made infrastructure, with spaces made for cars—and lots of them.

For airport operators unconvinced about the merits of getting into the autonomous car business, there is another way: decreasing labor costs to offset decreasing parking income. In the case of Seattle-Tacoma International Airport, a 29% reduction of current wages and salaries balances out a total loss of parking revenue. This shouldn’t sound that provocative; in the future, decreasing labor costs should be expected as more and more airport operations—from check-in and baggage handling to security screening and gate management—are handled, at least in some capacity, by robots. So, for an airport, autonomous cars can be seen as just one part of a larger trend of autonomous everything.