What Are Green Bonds and Why All the Fuss?

Marilyn Ceci is a Managing Director and Head of Green Bonds at JP Morgan. Ms. Ceci is a co-author of the Green Bond Principles and serves on the executive committee. She is an active speaker at Green Bond-related conferences. 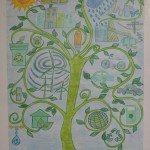 Green Bonds have similar features to regular bonds, but offer investors the opportunity to participate in the financing of ‘green’ projects that help mitigate climate change. Green Bonds are offered at the same price as traditional debt of the issuer. The proceeds raised from the bond sale are placed in a subaccount, or are otherwise tracked, on the balance sheet of the issuer. The proceeds can only be used to finance climate friendly projects, potential Green Project categories include (but are not limited to):

There are no tax advantages to owning a Green Bond compared with a traditional bond. However, Green Bonds offer issuers and investors a great opportunity to make sustainable, climate-friendly investments. In addition, research shows that companies which include environmental, social, and governance issues into their corporate strategy financially outperform those that do not.[1]

Who Is Involved in the Green Bond Market?

What Projects Are “Green” Enough?

There is no market standard for the definition of green. The Green Bond Principles (GBP) were developed with guidance from issuers, investors and environmental groups to serve as voluntary guidelines covering the recommended process for the development and issuance of Green Bonds. The transparency and disclosure recommended by the GBP are intended to provide the information needed for investors to make their own decisions about an issuer’s stated eligible project categories. J.P. Morgan was one of the four banks that co-authored the GBP and currently serves on the Executive Committee. A consortium of over 100 issuers, investors, opinion providers, and banks are GBP members and observers. The Climate Bonds Initiative has been diligently working in a consultative manner, for the past three years on establishing a market standard for the definition of green.

Investor transparency is essential to the growth of the Green Bond market. Issuers are encouraged to have their green projects assessed by external opinion providers who are climate expert consultants. Cicero, DNV-GL, Oekom Research, Sustainalytics, and Vigeo are active opinion providers. Issuers are also encouraged make public, annual reports on the green projects they were funded by the Green Bond proceeds.

Source: The Climate Bonds Initiative, J.P. Morgan as of February 5, 2015. Includes use of proceeds Green Bonds and the Toyota ABS

Cities Are Part of the Climate Change Dilemma

Cities generate over 80% of global GDP and house over 50% of the world’s population. 76% of cities report that climate change could impact businesses. Top concerns reported by companies and recognized by cities include storms/floods, rising sea levels, and rising temperatures / heat waves.[2]

Cities Are Part of the Climate Change Solution

Cities are working to reduce their environmental impact. Denver, London, Madrid, Durban, and Taipei reduced their emissions by a total of 13.1 million tons CO2 equivalent since 2009, a 12% reduction. In 2014, 207 cities reported to Carbon Disclosure Project, an 88% increase since last year. In 2014, 108 cities reported their carbon Emissions Inventory. Cities are also increasing their resilience to the impacts of climate change. This year, cities reported 757 adaptation activities and 102 cities have climate adaptation plans.[5]

Sean Kidney from the Climate Bonds Initiative calls for “new means of finance for the bulk of the world’s cities that don’t currently borrow, and supportive green finance for developed cities going green. We need to view the world not so much as a collection of countries [but] as a network of cities and their surround[ing]s.”[6]

As employees and residents, people who both work and live in cities can bridge urban environmental concerns with corporate resources. For example, public transportation is easily accessible in most cities and a good alternative to sitting in traffic getting to and from work. Some employers provide resources for their employees to organize carpools to and from the office. Corporations may get more involved with cities’ efforts too. For example, Southern California is highly exposed to drought and wild fire risk. To mitigate this risk, San Diego has created water conservation plans to help its residents reduce water usage. Sempra Energy, a San Diego-based company that provides electricity to over 20 million customers in Southern California and employs thousands of people who are also residents, monitors water levels in nearby river basins and builds plants that minimize water usage.[7]

Cities such as Johannesburg, Gothenburg, Spokane, and Tacoma have issued Green Bonds. In June 2014, Johannesburg was the first city to issue a Green Bond, and the first African Green Bond. The proceeds of the bond are used to finance low-carbon energy and transport projects. U.S. cities Spokane and Tacoma, both in the state of Washington, have also issued Green Bonds to improve water quality. Paul Palmeri, head of Public Finance at J.P. Morgan finds that the Green Bond market is a “compelling opportunity for municipalities to communicate sustainability strategy to their taxpayers.”

Up Next, New York City?

NYC plans to spend over $27 billion on green infrastructure. During UN Climate Week in 2014, Mayor de Blasio of NYC announced a plan to cut NYC’s greenhouse gas emissions 80% by 2050. And the City’s comptroller, Scott Stringer, is advocating for New York City to issue Green Bonds. He says, “We were the catalyst for the change in banning smoking in restaurants, trans fats. We could serve as a model for the municipal bond marketplace as well.” [9] If NYC does issue Green Bonds, it would become one of the largest issuers in the Green Bond municipal market.

Green Bonds offer a unique opportunity for our cities to join together with the large corporates, who employ large numbers of city dwellers, to commit to mitigate climate change.

[4] The International Institute for Environment and Development