Water Conservation Can Be Smart AND Sexy

Tyrone Jue is the Communications Director at the San Francisco Public Utilities Commission, a water, power and sewer utility for the City and County of San Francisco. He currently serves as the agency spokesperson and chief branding officer, and has successfully led innovative and nationally-recognized engagement campaigns on a diverse array of utility topics.

On January 31, 2014, the SFPUC asked its customers to voluntarily curtail water consumption by 10%. To facilitate achieving this goal, the SFPUC Communications Division developed and launched a multi-lingual and edgy public education campaign that successfully promoted water conservation through behavioral changes and plumbing upgrades for residents and businesses.

With 2013 being the driest year on record in California and no relief in sight, the San Francisco Public Utilities Commission (SFPUC) in January 2014 asked its customers to voluntarily reduce their water use by 10%.

We’re proud that the 2.6 million people that rely on our Hetch Hetchy Regional Water System carry a strong conservation and environmental ethos. In San Francisco, residents use a miserly 49 gallons per person per day, one of the lowest in entire state, and 50% of the national average. These low use numbers, however, make achieving additional water savings even more challenging. 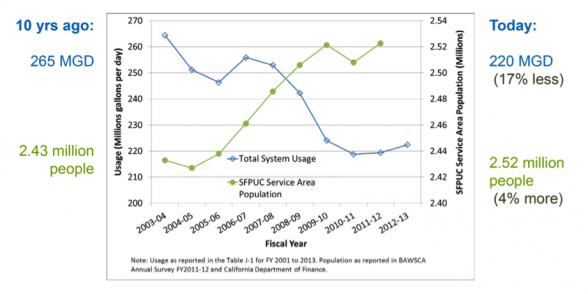 Thanks to conservation efforts by our retail and wholesale customers, system-wide water use has decreased by 17% even though population has increased by 4% in the past decade.

We needed a creative campaign that would provoke thought, encourage conversation, and inspire immediate action. In June 2014, the SFPUC Communications Division launched the “Water Conservation is Smart and Sexy” campaign that was featured on television, newspapers, buses, outdoor billboards and online.

The double entendré “Quickie” captures attention; then the reader sees the ad is promoting shorter showers.

The summer campaign from June-August had 3 goals:

Commercial featured on TV and Youtube. The SFPUC developed the concept, script, and even provided the voice over talent! Credit to the City’s SFGov TV team for the video shoot and production. 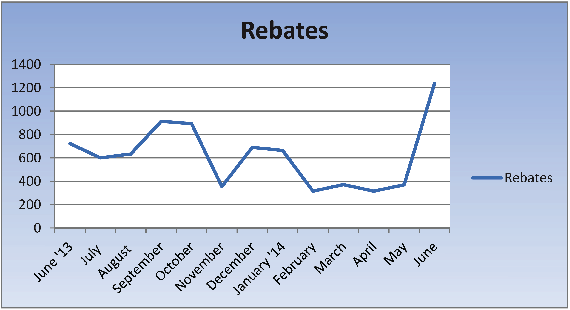 Customer rebate applications for high-efficiency toilets and appliances surged during the first month of the campaign. June 2014 saw a 334% jump over May.

How did we do? Thanks to our campaign we’ve exceeded our 10% conservation goal! 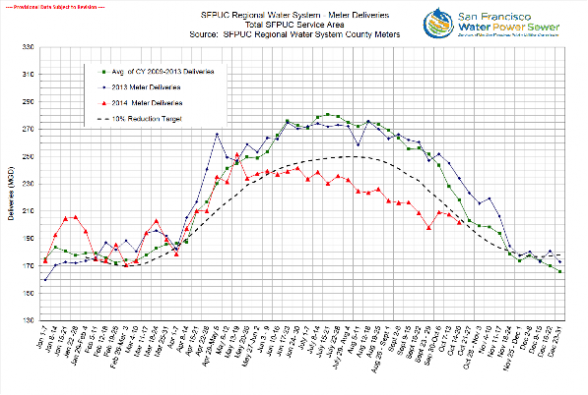 The dotted line represents the 10% conservation baseline and the red line indicates customer use. Since June, our customers have exceeded the 10% goal and made up for the earlier part of the year. Thanks to San Francisco Mayor Ed Lee’s executive directive, even San Francisco city departments have reduced their water use by 16%.

Conservation and drought preparedness are not “quickies” and are the new normal in California. If we are not vigilant and consistent with our education, even the savings we gained this summer can quickly evaporate. Our reduced demand and wiser water use is here to stay.

As public agencies, we need to be even more innovative and unafraid to take chances. Our messages to protect and enhance our public safety, health, education, environment, and economy are some of the most important ones the public should pay attention to.  I think the success of the “Water is Sexy and Smart Campaign” is a turning point and hopefully challenges others to think outside the box.

By harnessing the creative talent and innovation of your team, we have dared to create provocative campaigns that will capture the interest of our audience.

I promise by “Doing It” you’ll be amazingly “Satisfied” with the results.