by Nicole RupersburgJul 6, 2016Urban Innovator of the Week 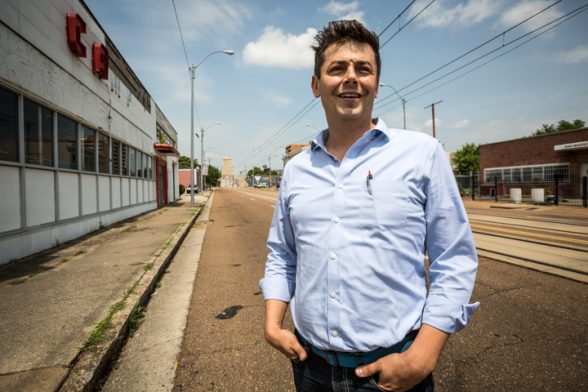 “Our charge is to build back a community and neighborhood around these anchor institutions,” says MMDC President Tommy Pacello. “There are 270 acres of surface parking lots in the district. There’s a bunch of underused property. So how do we transform that into a vibrant lynchpin between Downtown and Midtown?”

Pacello is originally from Memphis and trained as an attorney and city planner. He has lived all over country but moved back to Memphis in 2012 to work for the Mayor’s Innovation Delivery Team, funded by Bloomberg Philanthropies as part of a five-city pioneer program – also including Atlanta, New Orleans, Chicago, and Louisville – focused on civic innovation and addressing the legacy challenges each of the cities face.

In Memphis, that meant issues of transit and mobility, improving public spaces, reducing blight and vacancy, growing existing businesses and attracting new ones, fostering a more efficient government, and addressing youth gun violence in neighborhoods that were designated as classically distressed, transitional, or upward-moving. In 2015 he was brought on by real estate and economic consulting firm U3 Advisors to develop the Anchor Strategy for the MMDC and was named President in January 2016.

He explains that Downtown Memphis has been undergoing a tremendous transformation over the last few decades, and Midtown has seen a lot of activity in the past few years in the wake of the Crosstown Concourse and Overton Square developments. The transformation of the Memphis Medical District – the “donut hole,” as he calls it, in the middle of these two growing areas – will act as a vibrant bridge between them.

And the area is ripe for it: Pacello says there are 24,000 employees and students in the Medical District. The anchor institutions have a $2.7 billion collective operating budget – of which $350 million is available to be spent within the community – with another $2.5-3 billion in planned capital investment and a projected 5,000 new jobs coming online in the next five years.

“It’s a really huge economic engine,” he says. “The challenge is that there’s really not a lot going on. The District lacks this cohesive sense of place. For many years it was this sort of donut hole – people would pass through it but didn’t want to spend any time in it.”

To address the question of, “How do we transform this?” the MMDC is taking a number of different approaches. Pacello describes the Collaborative as functioning as an intermediary between the anchor institutions and the community, allowing the institutions to keep their focus on healing, teaching, and research, while at the same time leveraging their resources – the people who work and study within these institutions and the real estate that the institutions own – to reposition the District.

“We think about the demand side and the supply side,” says Pacello. “The demand side is leveraging those people, dollars, and places.”

To do this, the MMDC is launching a “Live Local” program this fall, a housing incentive program for employees and students in the District modeled after successful programs in Detroit’s Downtown and Midtown.

In order to capture more of that $350 million in operating budgets available to be spent locally – of which only $50 million is currently staying in the Memphis economy – the MMDC is introducing “Buy Local” efforts in order to attract and create new local spend opportunities, with a focus on minority- and women-owned businesses.

In addition to demand, the MMDC also needs to meet supply, and this is where public realm and safety improvements come into play. Clean, well-landscaped streets, well-maintained public art, and placemaking initiatives are all designed to get people in the District out of their buildings and into the public spaces. Match-making grants for façade improvements and assistance in finding and securing vacant properties will also help attract small business owners into the neighborhood.

Another critical aspect and major concern for residents is safety, so the MMDC is coordinating monthly meetings with multiple police patrols and security teams, organizing community safety programs, and adding design features like additional lighting and security cameras.

Pacello says safety concerns are largely a product of the built environment and the negative perception people have of it.

“There is very little actual crime in District,” he says. “People are reacting to the built environment. There are fences around the campuses and open parking lots sending signals that the District isn’t safe.”

One strategy to combat the negative perception of the space is to program regular events in the District, like group bike rides, early morning runs, and food- and arts-based events to “begin to pull people out of those buildings.” Pacello explains, “We began thinking tactically about the small interventions that can be done without a lot of money – we can do pop-up events, we can offer small incentives to attract businesses, and we can serve as a Sherpa for small businesses navigating government.” He jokingly refers to the MMDC as the “Bureaucracy Elimination Bureau.”

The problem is not lack of residents – the Memphis Medical District is currently at 98 percent occupancy of its available residential housing. “A lot of supply is still needed,” Pacello says. “We’re trying to break up the monoculture by injecting in new residential product, new office and retail space, and creative businesses that weren’t set up in the District. We’re thinking about the District at a broad level and targeting real estate opportunities.”

Institutions tend to plan in siloes, he explains. Part of the idea behind the Collaborative is getting them together to think and plan district-wide: for example, a transit plan is not just transit for one employer; it’s a matter of getting all the employers on the same page to open up doors for transit plans that are networked together.

“It’s great to create this economic sizzle,” Pacello says of his time on the Innovation Delivery Team, implementing small-scale strategies to generate economic vitality. “Now we need to take that and scale it up, and we now have the capital behind us to scale into a more lasting, permanent project.”