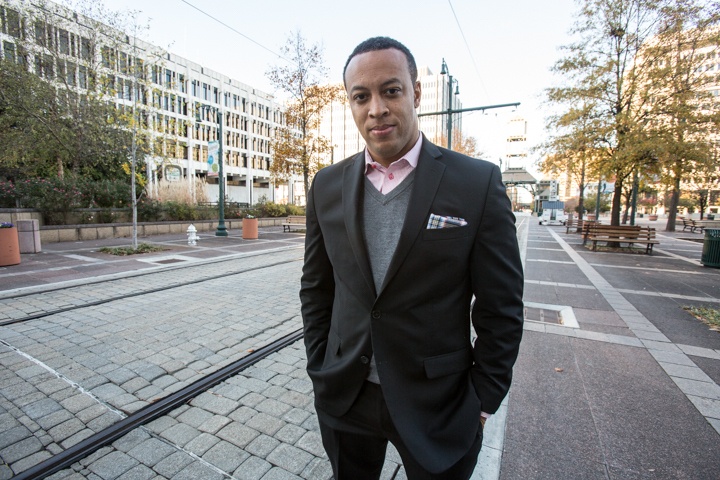 Terence Patterson, President and CEO of the Downtown Memphis Commission, used to be Jerry Maguire. Originally from Memphis, he earned his undergraduate degree at Harvard, and then worked for three years for the Walt Disney Company doing corporate finance. After three years of that he realized he didn’t want to be a CFO, so he went back to business school and law school, earning an MBA and a juris doctor from Northwestern University.

He was the first lawyer in his family but his was a football family, and he even played football at Harvard. Those things dovetailed in ways he wouldn’t have anticipated.

“While I was in law school my younger brother and his friends were playing football in college and asked me to look at their contracts,” he explains. “Basically I graduated law school with eight clients already and was Jerry Maguire, but then I realized I didn’t want to wake up and be 40 negotiating contracts for 20-year-olds.”

Which led to his next career pivot to working in mergers and acquisitions in Chicago for the firm Kirkland & Ellis. “It was standard corporate law,” he says, “but I was still not yet fulfilled.”

Until a colleague of his from business school said that he should look into working in education and trying to improve Chicago’s education system, known for being among the most notoriously racially and socioeconomically segregated in the country.

“That conversation turned into me being appointed Deputy Chief of Staff at Chicago Public Schools,” he says. “I did that for year, then was asked to run the Office of New Schools in Chicago,” where he was responsible for 113 new charter schools.

It was around this time that the Hyde Family Foundations in Memphis heard about the work he was doing and asked him to move back and run their $50 million education portfolio.

“I was the youngest member of the cabinet in the third largest school system in the country – I told them maybe when I’m 50!” he laughs. “But they called back and I finally said yes.”

For five years he worked as the Program Director for Education for Hyde Family Foundations and served on the board of the Downtown Memphis Commission (DMC), where he got a better understanding of what economic development meant, “the bricks-and-mortar of how do you create jobs and establish more opportunities, most notably in the most dense neighborhoods downtown.”

He became close with the DMC’s CEO and a year later was asked to take over his job. This past fall, at the age of 37, he became the youngest African American CEO to lead the Downtown Memphis Commission.

“The theme for me is there a lot of my peers and colleagues who want to make a lot of money but I think doing the best you can is wonderful,” says Patterson. “Somewhere along my career I said I want to make an impact in communities that mean something to me. The opportunity to do great work in my hometown meant even more. The opportunity to lead one of the most important parts of the community, the central business district which generates two-and-a-half times more revenue than the rest of the city and four times more than the county, it just means so much to just be a small part of the change and improvement our city has been making over the last five to ten years.”

He said he was previously attracted to doing education work because he felt it was the most important building block to wealth building, community development, and economic development. “Now I’ve shifted and expanded to make an impact in a different way.”

The Downtown Memphis Commission was created in 1977 to increase the number of people coming downtown and to increase property values. It was created to make Downtown Memphis the best place where people wanted to live, work, and play. They have a suite of economic incentives for real estate and commercial development, and are also responsible for ensuring the safety and maintenance of downtown. They also support and create events downtown and own and operate eight parking garages downtown to ensure people have a safe and convenient place to park when they visit. “We were really built to promote the vibrancy and energy in the central business district, the most dense area in Memphis. We’re responsible for making sure things are going smoothly.”

The Downtown Memphis Commission provides development loans and grants for community development projects inside the district of anywhere from $15,000 to $1 million, but, Patterson says, the biggest tool they have is a pre-development tax freeze, or payments in lieu of taxes (PILOTs).

“We have the authority to abate taxes for a particular amount of downtown so projects that wouldn’t have happened can happen,” he explains.

Patterson realizes that while all of these big, transformational projects are hugely important for the continued development and improvement of downtown, he is also equally aware of the important of the so-called “minor” details.

“We’re obviously focused on bringing more business and enterprises downtown – ServiceMaster is moving and bringing 1,200 employees to Downtown Memphis – but we also know we need to keep our downtown vibrant and active. Those are ways we can keep people excited and engaged.”

He says some of the most significant work lead by the DMC is their commitment to the temporary activation of spaces that are underutilized and blighted.

“That’s not necessarily new or groundbreaking,” he says, “But we have an intentional focus on if we have a building in disrepair we’re trying to figure out how to go in and put a temporary activation or beautification, so in the short run it is inviting and people can imagine what it can be.”

The DMC isn’t just focused on activating underutilized and blighted buildings, but also the main corridor running through the heart of downtown.

“We’re thinking about two really cool opportunities for activation on the Main Street mall corridor,” Patterson explains. “One focuses on music: Memphis has a rich music heritage but when you walk down the Main Street mall it’s basically silent. What would happen if we added music? So we had a busking challenge to encourage buskers to come out and get them all out on the street at once, with the idea of creating a ‘Memphis sound’ and maybe turning that into a regular occurrence.”

The second thing is The Artery, art activations in primary alley thoroughfares along Main Street, a strategy that has worked well for cities like Detroit and Philadelphia.

“We want to encourage local artists to make submissions of sculptures, murals, and art they would like to see in the heart of downtown, turning something people would not want to walk through at night into an outdoor art museum.”

The Main Street Busking Challenge was held over two days this past fall and the Artery is already underway accepting submissions with new public art projects slated to start appearing over the winter.

Another seemingly “small” but significant effort of the DMC is providing small grants to downtown core business owners for exterior and sidewalk improvements.

“You have to stay focused on the details and you have to sweat the small stuff,” says Patterson. “These small improvements start adding up and eventually you reach a tipping point. These are not important in isolation, but if people start seeing one, five, 20 improvements, it’s about building momentum and also demonstrating what’s possible. It’s not always the $50 million project or $200 million skyscraper; sometime it’s just about a sidewalk on the corner everyone walks by every day.”

The DMC has created exterior and sidewalk improvement grants, two relatively small grants of up to $5,000 for sidewalks and $5,000-60,000 for exterior improvements.

“Those are opportunities for business owners to really improve their properties,” he says. “Obviously façades are important but also something just as simple as a sidewalk – you don’t want to see cracks in the sidewalk in the center of the Central Business District. We’re trying to eliminate the number of excuses for business owners and let them know we’re providing this to help them. Those two things are really emblematic to improving how our city looks, but also how owners take pride in our community.”

The next focus for the DMC will be working on how to integrate interactive technology to make downtown Memphis more enticing for visitors and the digital native generation.