by Nicole RupersburgAug 10, 2016Infrastructure, Society, Urban Innovator of the Week 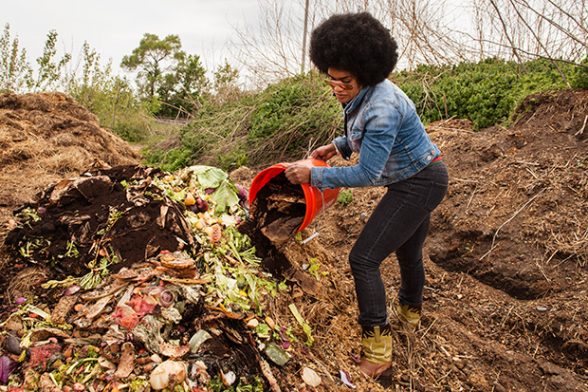 It has been over two years since Urban Innovation Exchange first profiled Pashon Murray of Detroit Dirt; over two years since the Ford commercial produced by Team Detroit and starring Murray catapulted her to the level of cultural zeitgeist, becoming the face not just of the local food, sustainability, and entrepreneurship movements in Detroit, but a symbolic embodiment of those movements all over the country. At the risk of sounding clichéd or hyperbolic, Pashon Murray is America.

“After the commercial happened I totally wasn’t expecting everything that came along with that as far as the attention that came globally,” Murray recalls. “I don’t think any of us expected it to break ground the way it did. There was this commercial that basically displayed a person who people in general could relate to, who’s working every day, showing what real people really are and what Americans really are.”

A lifelong champion of waste reduction, sustainable practices, and circular economies, Murray found herself in the center of a media storm almost immediately, one that only gained momentum in the ensuing weeks as journalists discovered she is a real person, not an actress or model, and she does indeed collect food waste and manure to create nutrient-rich compost and other valuable renewable materials like biofuels.

“Globally, food is important, local food is important, and waste is important, but we don’t talk about waste because we don’t understand it; we don’t understand the policy and legislation around it,” she says. “It’s a very fragmented movement and I’m very grateful to be a spokesperson for it. I’ve always wanted to be a part of something all people can benefit from. Climate is something people try to make so scientific, but I can nail it down to something really simple for people: ‘Hey, we need to stop wasting so much food and putting it in landfills!'”

She has been featured in Newsweek, Fortune, Forbes, and Vice, just to name a few. She was invited to the White House for the Obama administration’s first-ever Demo Day in 2015, in which 30 entrepreneurs from around the country were invited to present their business ideas and projects; was awarded an MIT Media Lab fellowship; was named an American Made winner by Martha Stewart; andrepresented Detroit at the 2016 Global Enterprise Summit hosted by President Barack Obama. She has been a public figure in high demand, flying all over the country for speaking engagements including those in her own backyard in Detroit, and also narrated the short film “The Soil Story” produced by soil restoration advocacy group Kiss the Ground.

The last two-plus years have been a dizzying whirlwind, and all the while Murray has continued her work growing and expanding Detroit Dirt: purchasing more land from the city; signing on increasingly larger corporate contracts to purchase food and animal waste with which to make compost that is then sold to urban farms, community gardens, and corporate gardens; and forming partnerships with the likes of another Detroit-based cultural zeitgeist Shinola, which includes ad campaigns, a book on composting (written by Murray), and plans for future product development.

“Detroit could be one of the most green cities, practicing sustainability on a completely different level from the ground up as we’re rebuilding,” she says. “We can be a leader in this space because we have the opportunity and talent right here.”

Murray says Detroit Dirt is about to take on some larger contracts for yard and food waste, and she expects to create an additional 15-20 jobs in 2017. Detroit Dirt maintains a firm commitment to hiring from within the community and has partnered with Goodwill’s Green Works to hire returning citizens trained through the program.

Her goal is to have three or four locations in the city in order for Detroit Dirt to align with education programs and ultimately be a model for the rest of the country in job creation and educational programming in this sustainability and social responsibility space, showing food waste as a valuable resource in the movement towards waste reduction and renewable energy.

As Murray rode the tidal wave of demand that came after the Ford commercial, hopping on planes to jet from one side of the country to the other in a perpetual loop, she started getting sick. Then, last July, she was rushed to the hospital after blood clots traveled into her heart and lungs, causing a stroke. She was minutes away from dying.

Her body continued to crash after that. She was diagnosed with a blood clotting disorder and a hole was also discovered in her heart, a condition she was born with but had never previously manifested symptoms. She spent the holidays last year undergoing surgery and recuperating.

“A lot of people don’t know that in the midst of everything that’s been going on I’ve been dealing with health issues too,” says Murray. “First my life changes from the commercial, then one day I’m wondering why I can’t breathe, and next thing I know I’m being rushed to the hospital.”

But she never let anything get in the way of Detroit Dirt, and refused to allow it to be diluted.

“Even though I almost died, I’ve given my life to this cause. I’m so grateful people are calling and saying, ‘Hey, how do I get that in my community?’ and being able to display the company at the White House. I wouldn’t change anything. I know for sure this is what I was born to do now. Through all of that the one thing I can honestly say is that I know that I have a purpose.”

In the twelve years since she has lived in Detroit, she has seen a groundswell in sustainable movements and community building efforts. “I’m beginning to see all this coming full circle,” she says. “I’m seeing the city evolve. For me that confirmation only just happened – while I was sick was the first time I sat down and actually reflected on it.”

And she also sees the impact that Detroiters are having in ripple effects across the rest of the country.

“It’s the reinvention of America. For a lot of Detroiters we were just thinking about what we were going to do in Detroit. We just thought we were helping Detroit, but spiritually Detroit reflected the world.”

So too, then, does Pashon Murray.