by Nicole RupersburgNov 1, 2016Society, Urban Innovator of the Week 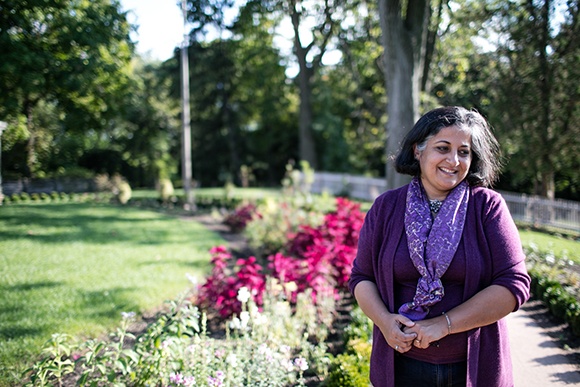 Maitreyi Roy is the Executive Director of Bartram’s Garden in Philadelphia. A landscape architect by training, she has spent almost 25 years looking at community greening issues through the lens of urban development.

Established in 1728, Bartram’s Garden was the first botanic garden in the nation and is the oldest surviving botanic garden in North America. Situated on 46 acres along the Schuylkill River, the garden was stewarded by three generations of the Bartram family and was once an important center for research and knowledge around plants and horticulture until 1891, when control of the site was turned over to the City of Philadelphia after the industry that surrounded the garden lost its presence in the city, precipitating decades of decline.

Located in Southwest Philadelphia, the garden is in one of the most underserved parts of the city.

“The issues this community faces around its children, its families, their health and their safety are tremendous,” says Roy. “The opportunity to become the garden’s Executive Director was not only an opportunity for me to be much more focused on a beautiful piece of land with lots of potential, but it tied back into the public interest and public domain.”

Roy has served as Executive Director of Bartram’s Garden for four and a half years. When she first stepped in, she paid a visit to a public housing site that is the Garden’s closest neighbor, home to 200 residents. She attended one of their council meetings and was certain there would be interest in what the garden was doing, but only two or three people in the room had ever even visited it.

“That was really a flag for me that we need to completely change the relationship with the community if this garden were to have a future,” says Roy. “The questions that we then, as a staff and a board, had to ask were what is this garden’s role in this community and what can we do to support the needs of the community? As we asked ourselves those questions we started to ask our neighbors and community leaders those same questions.”

Founder John Bartram collected plants from all over North America and shared them with the world. His garden was the starting point for the lucrative horticulture industry, yet the garden where it all began was struggling. Roy knew it didn’t have to be that way; that the garden could once again serve and be served by the community, and once again be a valued asset and resource.

“Some things were immediately apparent: we had to really be very vocal about inviting people to be a part of the garden. That was missing. People didn’t feel welcome in the garden, and that was the first step,” she says.

Another major step early on was establishing a community farm at the Garden.

“This part of the city is one of the fastest-growing new immigrant communities,” Roy explains. “Giving families a chance to grow their own foods gave such passion to these immigrants from Liberia, West Africa, Cambodia, Vietnam – they were able to grow things that were a part of their culture.”

Bartram’s Garden now has 60 families with their own plots, in addition to its own community garden, that collectively produce 12,000 pounds of food each year that goes directly to families in Southwest Philadelphia.

“We’re working on big challenges, like getting people access to healthy food and a direct connection to their own food. That brings great power to a family, to know where your next dinner is coming from. It’s great way to bring families together and really change what is on people’s dinner plates.”

The gardens have also become an important hands-on educational space for local youth. As the only freshwater wetlands on the river, along with the urban farm, the upland forest areas, and the apiary that is also part of the gardens, the gardens have several different interesting ecosystems that are all part of their outdoor classroom. They use the history of the Garden to connect to lessons of sustainability – valuing the idea of growing your own food, as Bartram himself once did, and teaching children from elementary school to high school lessons in basic ecology and healthy eating. Youth from all over the city visit the gardens on field trips, while youth from the Southwest community visit on a much more intensive basis, with classes visiting once a week throughout the school year learning things like how to use power tools and building their own boats, which are launched into the river and become part of Bartram’s “fleet,” used for free family paddling programs.

Bartram’s Garden sees about 10,000 school kids throughout the course of a year. Some only visit on field trips; some are there year-round through all four years of high school. Bartram’s offers paid internships for local kids to get a chance to make some money while also learning various skills, and they are currently seeking funding to hire students to work on the farm and learn about farm production, paying them through the school year and summer to run the farm programs.

“The idea of turning this into a place where youth in the community can get hired and trained – those are the kinds of things we’re working on to make the Garden more relevant to people’s lives,” says Roy.

But beyond education, training, job creation, and growing and supplying food for the community, Bartram’s Garden has also become the community hub and gathering space that Roy envisioned from her first days as director.

“The place has become a place for dialogue, for exchange, and just for having fun,” she says. “We want to be very mindful that this is very much a place for local community life. We have thousands of school children that come to garden to learn about food and nature, and now we have made some serious headway to become a part of the social conversation with families coming on Saturdays for movie night or a concert or because they have a plot here. We’re making those vital connections.”

Currently the city is investing money to connect the gardens to the Schuylkill River Trail, also connecting to the Art Museum, Fairmount Park, and Valley Forge National Historical Park, which will be completed in the next few years.

“That will be a real game-changer for the garden and for the community,” says Roy. “Every neighborhood has a connection to Fairmount Park. Anybody can be in this beautiful park, except the Southwest lost its physical connection. Now with this portion of trails coming through they’re going to reconnect this neighborhood to the Center City and to the park system. It’s also a big opportunity to make right what went wrong years ago.”

Roy says the trail expansion creates a sense of urgency for the Garden to really become a part of the Southwest community’s daily life; to become “the family room of the community” while also rebuilding this important connection to nature.

“People used to avoid the river. Now we’re doing programming and education so people reconnect to the river through kayaking, fishing programs, lessons about the river ecology. We’re trying to tackle this issue of reconnection on multiple fronts. Some things work; others don’t. My mantra is try it out, fail forward fast, and move on to the next thing. We’re in this wonderful period of experimentation right now!”

At the heart of this experimentation, what Bartram’s Garden is ultimately trying to do is become a place that the community embraces as its own, a destination for families for summer barbecues, birthday and graduation parties, picnics, and other outdoor family events. Now, Roy says, when she attends a residence council meeting, more than half of the people in attendance have visited the gardens and the rest have heard about them and ask her questions.

“It’s really exciting to be out and about and people know what it is now!”