by Nicole RupersburgSep 19, 2016Society, Urban Innovator of the Week 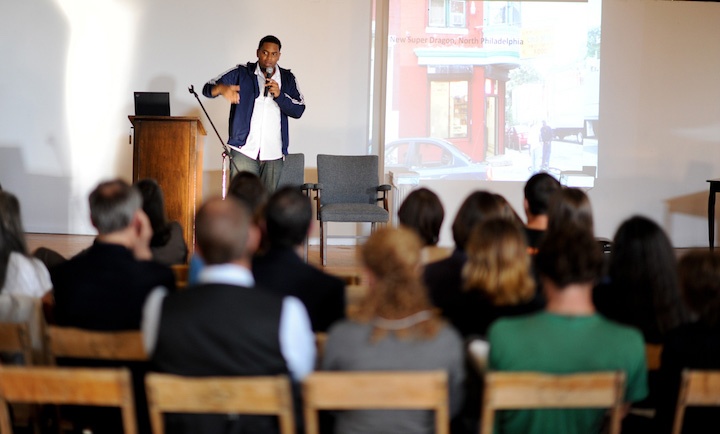 James Johnson-Piett, principal and CEO of New York-based Urbane Development, has had what he calls a “circuitous career.” As a political science major for his undergraduate degree, he went on to own a T-shirt company, write screenplays, and read tarot cards, among other things.

By 2005, though, he was working at The Food Trust in Philadelphia, running the original corner store and market as program manager until 2008.

“A lot of the fresh food financing that happened at the time was part of my programming,” he says. “Almost 10 years ago that became the first incarnation of a healthy bodega/corner stone concept. I was doing more tactical work with the Food Trust, helping them market to underserved markets.”

After leaving the Food Trust he continued to do consulting work with other cities that were interested in replicating the work they had done in Philadelphia, figuring out funding solutions for this kind of work, which banks wouldn’t typically fund.

He assisted two former clients of the Trust to build programs with a mix of public and private financing and a focus on workforce development.

“We focus on a lot of existing markets, making them higher-functioning – bigger, better, faster, and stronger – focusing on the business first and making sure they have all the tools they need to succeed.”

He jokes that he was “this random grocery store fixer” for a while, a “hired gun” for foundations like Kresge in Detroit and Grow America in New York.

“Basically I was The Wolf [from Pulp Fiction]!” he laughs.

Now, with Urbane Development, Johnson-Piett works with community anchors – stores, schools, faith-based groups, and other locally-entrenched institutions – to build resilient neighborhoods and solve the problems that affect everyone’s quality of life within their respective communities.

He sees a wealth of entrepreneurial creativity in areas of scarcity and limited resources, which led to the development of Urbane Development in 2008.

“I grew up in North Philadelphia. We found ways to supplement income off the books,” he says. “The sharing economy has existed for 30 years. You could go down the line with each of these constructs and find a precedent for it that happened in underserved markets. The entrepreneurship community and creativity that people want to talk about have existed in places of scarcity long before. For us it’s not that we’re a research company or a data company or a consultancy; I’m just trudging along trying to make all that work. There is real opportunity that I see.”

Johnson-Piett says Urbane allowed him to really codify his true mission: creating pathways to underserved communities, trying to be disruptive in those markets, and challenging the generally accepted status quo of community development strategies.

By its most basic definition, Urbane Development does “community development.” But this isn’t the well-meaning-outsider-parachuting-in, often-poorly-executed-and-tone-deaf-to-local-needs kind of community development that increasingly happens in redeveloping urban centers all throughout the country; the Urbane brand is much more self-aware.

“If you asked 100 people what community development is, you would get 100 different answers. Talking about community development as an industry, no one knows what that means,” Johnson-Piett states. “For us that North Star is, how do you really develop community in places where it has been neglected? What structures need to be in place in order to do that effectively? Particularly in ways to give people a voice so they feel empowered.”

He calls attention to the amount of work currently happening in this space of so-called social missions.

“You hear so much about social impact. All right, so what impacts are we actually talking about? Are we talking about some sort of solar project that actually impacted people, or something you did so you can feel better about yourself? In this way the stuff we’re talking about is a gradient: let’s leverage the systems people have already created for community benefit. Let’s leapfrog development constructs. We solve problems that have been intractable for years. We have big, hairy, audacious goals because have big, hairy, audacious problems.”

“We get a clear understanding of the place,” he says. “We do our primary research and data collection in places that are harder to understand: What are the leverage points? Is there a drug trade? Are a lot of people on food stamps? What things are people doing to supplement their income? Sometimes the solution can be a loan fund for workforce development, so that research informs the consulting that we do.”

One community investment strategy championed by Johnson-Piett is investment in community anchors: places like corner stores, liquor stores, and libraries.

“These are sticky, resilient, place-based entities in the neighborhood,'” he says.

There is also a continued emphasis on markets and food-based enterprises and entrepreneurs because, as Johnson-Piett says, food is “catalytic,” not just an entry point into the marketplace for aspiring entrepreneurs but also a way to even the playing field of food access in areas that are underserved and often qualify as “food deserts.”

Within the last 18 months Urbane Development has also started getting into place-based investment, looking at the assets in a community that are physical structures that can be leveraged for wealth.

Their first development project is the Flatbush Caton Market in Brooklyn, a 212,000-square-foot, 15-story building that they will redevelop into 166 affordable housing units with a 20,000-square foot ground-floor marketplace including food producers and other vendors selling clothing, accessories, and art. The building will also include an additional business incubator space with a commercial kitchen and beauty lab.

Johnson-Piett hopes to partner with the local community college system so students can take classes for credit at the new site. He eventually also wants to have an e-commerce site available for vendors.

“We’re really creating a whole ecosystem of entrepreneurship,” he says. “Everything is going to help someone in an underserved market move forward with trying to generate income for themselves.”