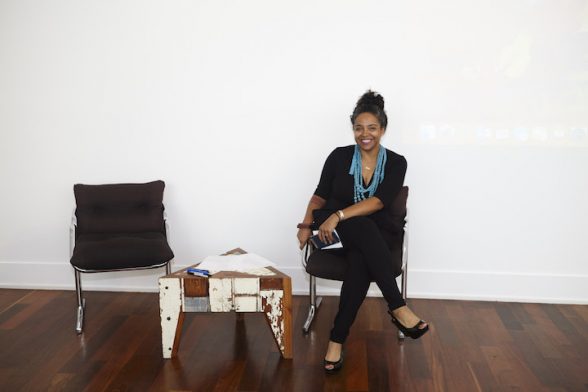 Isis Ferguson, Associate Director of City + Community Strategy for Place Lab, admits with a laugh it can be difficult to clearly define the work they do.

A partnership between UChicago Arts and the Harris School of Public Policy, Place Lab serves as “a catalyst for mindful urban transformation and creative redevelopment.”

But…what does that even mean?

“We’re really trying to document and demonstrate the work Theaster Gates has been doing for years and years on the South Side of Chicago. As someone’s art practice it can seem a little ambiguous and vague and magical, but what we’re really trying to do is tease out moments of learning for other cities and other practitioners who are deeply committed to place.”

Gates is probably the most recognized name in America in social practice art, focused on addressing social issues through creative engagement and collaboration. With a background in urban planning, religious studies, ceramics, and fine art, he has worked at the intersection of art, civic engagement, and urban development in his hometown of Chicago for organizations as varied as the Chicago Transit Authority, the University of Chicago, and the Rebuild Foundation– a nonprofit founded by Gates that focuses on cultural-driven redevelopment and affordable space initiatives in divested communities.

Ferguson has been with Place Lab since its inception two years ago. With a Master’s degree in gender and cultural studies and a Bachelor’s degree in women’s and Black studies, Ferguson has had an interest in “creating spaces of care and equity and inclusion, and understanding that art is the way we can do that” from a young age, when her mother instilled in her an appreciation and passion for creative and civic engagement.

She previously worked at the Jane Addams Hull-House Museum, founded in 1889 as a center for social reform and remaining true to its political roots over the last 132 years.

“The Hull-House is really keen on deepening civic engagement that addresses really big and important quality of life issues, thinking about place and space and what a robust site means for people,” Ferguson explains. “Now I’m working at Place Lab and thinking about cities, and aspirations for cities, and what kind of places we want our cities to be.”

“We work on a team that is a part of a person’s art practice,” says Ferguson. “It’s not traditional in the sense of being an exact, discrete thing. We bring a lot of energy to the team around creating narratives and creating processes for what we do.”

Place Lab oversees work in Chicago and Gary, Indiana, with additional engagement work partnering with folks on the ground in Detroit and Akron. The common thread is a focus on ethical urban redevelopment strategies in under-resourced communities, a natural outgrowth of Gates’s Rebuild Foundation.

That can take any number of shapes.

Last week, Place Lab held a grand unveiling of a geometric window design by local youth at the St. Laurence Elementary building, a former Catholic school that has sat vacant for the last 12 years. Several middle school students in the community helped design and paint window boards that will be used to winterize the building, done under the guidance of artist Ruben Aguirre in his workshop Board Up: Patterns in Place.

“How does a 13-year-old dictate what happens to a building that they live three blocks from?” Ferguson asks. “They traverse the streets where this building just sits. This is an example of creating projects for folks who are invested in a place but don’t particularly have a formalized way to engage the powerful actors in the neighborhood.”

In partnership with Rebuild, Place Lab safely took the kids through the neighborhood to create a kind of “sound experience” parade-of-sorts that ended at the school where kids were then given school supplies and backpacks. Rebuild’s musicians-in-residence played the event, and ¡Anímate! Studio’s FrankenToyMobile was also on-site for kids to create their own FrankenToys – toys made with repurposed parts from other toys.

“These are moments for making and for being together,” Ferguson says. “This is all tied to this idea that we can invite people early on in the process in ways where they feel they have ownership and stewardship so this place will have meaning for them later on.”

She also says that this is a great example of using different elements from Gates’s larger creative placemaking, social engagement, and urban redevelopment ecosystem. “It was a way to very nicely tie a thread between arts and public life, which we try to intentionally do more and more.”

In Gary, Place Lab is currently developing a food business and arts hub and community gathering space called ArtHouse: A Social Kitchen. Ferguson describes this as having both an artistic and an economic imperative: as a city with a single-industry dependency (in this case, steel), Gary has experienced decades of decline, leaving scores of vacant and underutilized buildings in its wake.

As a social practice artist with an urban planning background, Gates is known for thinking about space and how to develop cultural assets in places where there aren’t opportunities or platforms to connect people to ideas, talent, or resources. Gary seemed a natural fit for Place Lab to think through redevelopment strategies by reactivating or repurposing a space to be a cultural destination. After acquiring a building downtown with the assistance of grants from the Knight Cities Challenge and the Bloomberg Philanthropies Public Art Challenge, Place Lab set to work on redeveloping it as a culinary business incubator.

“Obviously food is a great tool for gathering people, but the idea is that this massive facility can function as a culinary business incubator so folks can be trained in the food industry and entrepreneurs can incubate businesses and grow more opportunities in Gary, where the retail leakage on food is $100 million a year,” Ferguson explains.

ArtHouse is still undergoing renovations, which will eventually include artist commissions for façade enhancements and light installations. As a long-term endeavor it is meant to be catalytic, to slowly and strategically grow opportunities that will continue outside of this building and act as an economic driver that leads to social cohesion, increasing the desirability of the place – the building itself and, to a greater extent, downtown Gary.

While the renovation work continues, Place Lab hosts dinner parties with other institutions to get residents in Gary gathered around a table with a cook or caterer and talk about ArtHouse as well as the civic identity of Gary.

“We have been trying to create these important gathering moments so we don’t fall out of the memory of people in Gary,” says Ferguson. “People know the building exists but if they don’t see activity there, the natural compulsion is to question what and when, if anything, is happening.”

The biggest and most long-term project Place Lab has been working on is Ethical Redevelopment, a Knight-funded project.

As a long-term documentation of Gates’s work on Chicago’s South Side, Place Lab interviewed various people who have worked with him in various capacities, including artists and funders, to get a stronger sense of this interdisciplinary place-based work. From these interviews, Place Lab developed the 9 Principles of Ethical Redevelopment, citing the nine ideas that rose to the top as the most dynamic elements of the work.

“What we’re doing is offering these principles as a proposition to other folks who do urban-based work to apply them over the next year to the work they’re doing,” explains Ferguson. “We’re moving from a self-referential place to a more external place, connecting to people.”

These nine principles were unveiled in June to a crowd of 375 people that incorporated a variety of forms of artistic interpretation to explain them, from singers to poets to visual artists to yogis. Five activist scholars also examined the principles from their respective academic lenses, asking, “What does it mean to have ethical redevelopment? What is the role of economics, of the Black feminist movement, of the artist?”

Place Lab then asked people to engage with them over the next year in refining these nine principles through two public convenings and nine by-invite salon sessions, each dedicated to unpacking one of the nine principles. Place Lab has 50 salon members committed to place-based work representing 13 cities, each appointed through a rigorous application process and committed to working through these ideas at each of the salon sessions through April 2017.

“In a way I sort of feel that Place Lab is creating a mini degree program, a ‘Communiversity’ where we’re trying to create space and opportunity and moments of real criticality with ethical redevelopment,” says Ferguson. ” I feel like we’re creating a really cool syllabus for people who care about urban space and urban populations.”