by Nicole RupersburgJun 14, 2016Urban Innovator of the Week 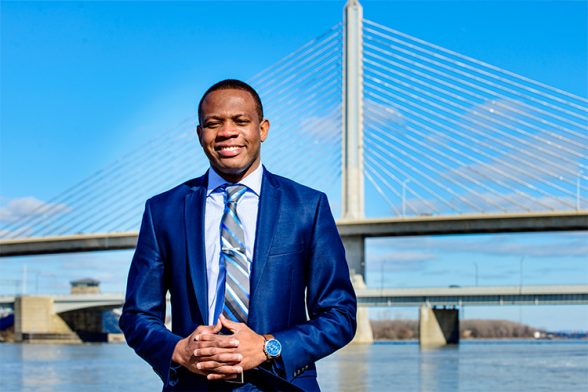 Gétro Jean-Claude was born and raised in Haiti, but he always knew he wanted to come to the United States to further his education. What he didn’t know was that, just 13 days after he landed in the United States to tour universities, one of the deadliest earthquakes in history would nearly decimate his home country.

“If I hadn’t left to visit, I would have been where it hit,” he recalls. But instead of becoming a statistic of a profound natural (and subsequently economic) disaster, Jean-Claude started taking English classes and applied to the University of Toledo.

At the University of Toledo, Jean-Claude majored in finance and international business. One advantage of growing up in Haiti, he says, was being exposed to several different languages. He is fluent in Spanish, English, French, and Haitian Creole, and is now learning Mandarin. He felt his language background would serve him well in international business, but ultimately decided to switch to a minor in accounting.

Throughout his college career, Jean-Claude was involved with several different community-minded and philanthropic organizations, including the University of Toledo Model United Nations, The SOMA Community and the Minority Student Business Development Network. Through another UT affiliation, Brothers on the Rise, Jean-Claude made a connection that led to a finance internship at the Toledo-Lucas County Port Authority. During this time he also founded Toledo CAN (Change a Need), an organization focused on poverty alleviation.

A year before he graduated, the Port Authority offered him a full-time job. As a Financial Analyst for the Port Authority, Jean-Claude underwrites loans and coordinates reports on investment portfolios and lending initiatives for small and large businesses – all that fun “finance guy” stuff.

But his position at the Port Authority also enables him to provide access to capital for minority contractors with the Diversified Contractors Accelerator Program (DCAP). He works with Economic Community Development Institute (ECDI) programs that provide working capital and other startup operating costs for small businesses and individuals who wouldn’t otherwise be eligible for bank loans.

“I’m very grateful for being born in Haiti because I’ve seen first-hand the poor conditions a lot of people are living in,” he says. “I love helping people in the back of the line, having the opportunity to help and giving back to people as God commanded me to serve the least of these.”

Impressed with his innate leadership skills and his work in the nonprofit sector, the Port Authority sent Jean-Claude to Leadership Toledo, a community development leadership training program. There he was exposed to several different nonprofit organizations presenting their needs; seven out of nine simply had marketing problems.

It just so happens that Jean-Claude also has a background in marketing.

In Haiti, Jean-Claude had a recording studio where he produced his own videos, and has a huge passion for marketing and promotional film. When he realized he could use his marketing, video, and multilingual skills to support the work of nonprofits, he launched CAN Digital Group in March 2014.

The CAN Digital Group is a marketing social enterprise dedicated to improving the quality of life and the well being of individuals and communities, locally and internationally. The five pillars of “quality of life” that CAN focuses on are providing access to quality education; delivering safe and clean drinking water; eradicating hunger, food insecurity and malnutrition; building quality shelters; and providing health care. To work toward these goals, CAN serves for-profit corporations, individuals, and nonprofits as a for-profit LLC.

“Every time we do something for an individual or for-profit business, we donate a portion to our nonprofit partners,” Jean-Claude says. He occasionally works with paid contractors, but, he says, most of the work is his own.

Right now CAN primarily produces promotional videos and sets up photo booths that upload photos instantly to smartphones at corporate and private events, including weddings.

CAN’s for-profit work offsets the cost of the pro bono work Jean-Claude does for nonprofit organization partners — for example, Walk for Water Toledo, a fundraising program for Clean Water for the World. In its first year, CAN produced a promotional video for Walk for Water Toledo that helped them raise over $7,000. Last year, CAN handled the entire promotional campaign, creating flyers and posters, developing social media campaigns, and producing three videos. As a result, the organization raised $15,000 to purchase water purification systems for countries in need. One of those water purification systems was donated to a remote village right around the corner from where Jean-Claude grew up in Haiti.

CAN has also provided his photo booth services to Relay for Life raising funds for the American Cancer Society and created a video project for Toledo’s Northpoint Church on a program called ReThink Christmas, working with The Pregnancy Center in Toledo, Water for Ishmael in Toledo, Young Life in Toledo, and an orphanage in Haiti. Jean-Claude also started a campaign raising funds for school supplies for Haitian schoolchildren, who then received backpacks full of supplies for the school year.These supplies were delivered at the Hut Outreach schools – an organization that Jean-Claude’s host parents, Toledo Natives – Nicole and Aaron Coulter started in 1997 in Haiti.

This year CAN is working with Walk for Water Toledo once again, which now has a goal of doubling their fundraising efforts once again to $30,000, as well as a new Water for Water chapter launching in Kalamazoo, Michigan.

All of his work with CAN’s non-profit partner is done free of charge, and up to 20 percent of proceeds from CAN’s paid jobs goes towards solving social issues – All donation to qualified nonprofit partners, or towards projects such as building schools or providing water purification systems.

“I really like the model of TOMS shoes – you purchase one set of shoes and they donate another one to people in need,” Jean-Claude says. “We are a for-profit organization with a nonprofit mission.”

For Jean-Claude, his full-time job and his separate “side” business complement each other well. “The Port Authority allows me to work on programs that help the community move forward, and also gives me the opportunity to follow my passions.”