by Nicole RupersburgOct 18, 2016Urban Innovator of the Week 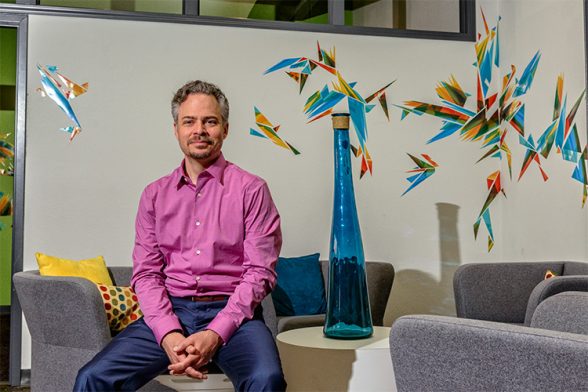 Gene Powell wears a lot of hats. His first passion is Spoke, a digital agency he launched in 2009. He’s also a co-founder of Seed Coworking, a business he started with two other partners in 2012. And there’s StartUp Toledo, which he organized to bring the area’s innovators and creators together for networking.

Those three things all keep Powell pretty involved in Toledo’s happenings. He has a friend who describes the city as “move-in ready,” and Powell agrees, noting that the area is especially attractive to young people.

“What’s cool about Toledo is you have a chance to make a huge, huge impact with not a ton of effort,” he says. “That’s not to discredit hard work, but you can create a pretty significant sphere of influence pretty easily and inexpensively.”

Powell is from Findlay but got a job in Toledo in 1990 and moved in 1993. He worked at various advertising, graphic design and marketing agencies before launching Spoke, which helps clients with branding, user experience and creating a web presence, among other things.

Powell was always into art and drawing. His dad worked in marketing and advertising, and growing up, his play time looked a little different than the typical kids’ stuff: “While other kids were going out, playing soccer or t-ball, I was playing with gridded paper and giant clip art books and rubber cement and X-Acto knives and typewriters,” he says. He originally considered studying medical illustration in college; his plans changed, however, when he realized that he’d have to attend autopsies and draw cadavers. Luckily, his college counselors at Bowling Green State University suggested that Powell consider graphic design as an option, and it seemed like a natural fit.

“It was one of those life changing moments, and I can’t imagine what I’d be doing today if I hadn’t discovered graphic design,” he says.

Spoke’s not the only digital agency in Toledo, which means there can be some healthy competition. While some of Spoke’s clients are located in the city, some are outside of the area, which Powell says keeps things interesting and diverse. Still, all the agencies in the city are able to co-exist.

“The competition is fairly aggressive locally, but it’s not unfriendly,” Powell says. “I don’t know of agencies who are mortal enemies or anything like that. It’s a very respectful environment, which is cool.”

Powell is a founding member of Seed Coworking, a space he and his co-founders weren’t sure would work in Toledo, because he assumed the city had little awareness of co-working overall when Seed started four years ago.

“We had seen this working pretty well on the East and West Coast, and there were some things popping up in Detroit and Ann Arbor,” he says. “The concept of co-working — that is, people sharing a single space where they can collaborate with like-minded others and network and participate in events and look for job opportunities for and with each other and get some work done while having a bit of fun — was a really appealing idea.”

So they explored the idea, asking around to see who would want to use the space and checking out real estate options. As it turns out, Toledo did understand co-working, at least enough to raise $15,000 in 21 days on Kickstarter. The initial goal was $12,000. Powell says that money was used for furnishings, so the Seed Coworking space was set up and ready to go when it opened.

“It’s been growing ever since,” Powell says. “We’ve got a nice membership base that’s growing; we’ve been able to parlay Seed Coworking into one of a few tech hubs in this region, which is pretty cool.”

Many of Seed Coworking’s members are involved in technology, but Powell says those demographics are slowly changing are more people come to the area and seek out a co-working space.

“Today, I think at our core we’re still very much a tech community, but we’re getting a diversity that’s exciting – marketers and writers and intellectual property attorneys. One of our newest members is an aeronautics consultant,” he says.

Seed Coworking calls South Saint Clair Street home, and Powell says the area has changed since Seed started and many restaurants, bars and coffee shops have opened up. He doesn’t like the word “renaissance” to describe what’s happening downtown right now, but he does like “revitalization.”

“It’s real and it’s substantial and people can see it happen and be a part of that,” he says. “Our timing was stupid luck in a lot of ways, just to find the space that we did when we did on the street that we did, four years prior to Hensville going up literally a block and a half to our north.”

Powell is also co-founder of StartUp Toledo, a monthly networking event “that spotlights our region’s best and brightest innovators, creators and entrepreneurs.”  He says Toledo has myriad resources for start-ups and entrepreneurs, from investment organization Rocket Ventures and the medical-focused ProMedica Innovations to experienced entrepreneurs who offer guidance and mentoring.

Although some hope StartUp Toledo gets larger — perhaps by becoming a non-profit, having a board of directors, or offering scholarships — Powell says he’s not sure what’s next. “I’m resisting [those ideas], mostly because I’m kind of a one-man show right now, so we’ll see how long I can resist that pull,” he says.

Although Toledo residents undoubtedly know his name, that’s not what Powell is focused on. In fact, he says it’s OK if no one remembers his name in the future, something he’s talked about with others who are working on grassroots efforts in Toledo. The people he admire are the ones who do things not for the recognition, but because those things will help the city.

“My hope is that a generation or two or three from now, somebody looks back and says ‘I chose to make my life and fortune in Toledo because 20 or 30 or 40 years ago somebody cared, somebody gave a crap,'” Powell says.