by Nicole RupersburgDec 19, 2016Society, Urban Innovator of the Week 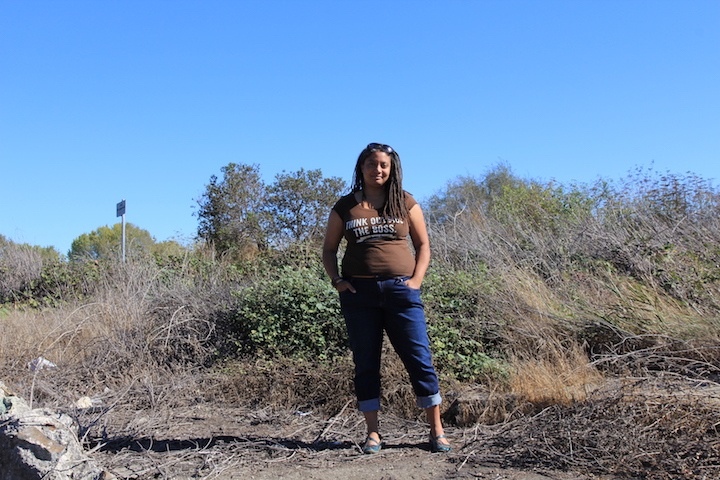 Doria Robinson is a third-generation resident of Richmond, California. Her great-grandparents moved to the city from the South after World War II and she still lives in the neighborhood she grew up in. Though she did leave for college and spent some time living outside of the city and the country, she found herself drawn back to her home.

“I felt that the best way I could use all the privilege I was given was to come back here and do good work here,” she says.

As Executive Director of Urban Tilth, Robinson is helping her community to build a more sustainable, healthy, and just food system.

Robinson had led efforts in daylighting creeks and watershed restoration in Richmond through The Watershed Project and Urban Creeks Council, so that “kids like me growing up don’t have to travel far to experience a sense of peace and a sense of connectivity.” She also co-founded Richmond SPOKES, an entrepreneurial youth training program rooted in cycling culture.

She remembers receiving a “visionary” email from Park Guthrie, the founder of Urban Tilth, talking about an abandoned railroad track and what the space could be: a public space with living gardens where people could gather and meet instead of break apart; a place that could treat urban water runoff with bioswales and serve other environmental mitigation, agricultural cultivation, and education purposes. He saw its potential to be an inspiring space instead of a depressing space.

“I wrote him back right away and said I want to be involved in this. I want to make this happen.”

She began working with Urban Tilth on creating the rail-to-trail Richmond Greenway project covering three miles of this previously derelict, abandoned railroad track that had become a popular illegal dumping ground and a dividing line for gang activity. “It was a place where a lot of things happened and none of them were good,” she recalls.

Now the Richmond Greenway is a space for family-friendly outdoor recreation and a symbol of a healthier, more engaged, more active, more connected community, a success story of Urban Tilth in their mission to be a local leader in community-focused projects that address environmental issues and food justice.

She remembers “Berryland” being one of the many ideas Guthrie mentioned in his email. It was Urban Tilth’s first garden, and it has become an all-berry garden filled with 18 different varieties of berries that gets “picked clean by the kids every year.”

“That started my engagement with food and public space, and rebuilding and nurturing derelict public spaces so they can be these engines of inspiration where people gather, where uncommon relations can be made and we can rebuild our city together,” she says.

Robinson has been working for Urban Tilth since 2006, and became Executive Director when Guthrie stepped down in 2008.

“I saw the potential power of this transformative work. I knew if we could engage young people like me at that age, if they were given a chance to step into this organization and look around them at their environment with the assets that we have, what could they do as individuals? I just couldn’t step away. I took on the role of Executive Director and slowly began to build what I felt like was this powerful vehicle for kids like me, residents like me, who are smart, capable, but don’t have the access to really make a change.”

Now Urban Tilth oversees seven school and community gardens, two farms, a summer apprentice program for youth 14-24 years old, and a watershed restoration and training program. It has a permanent year-round staff of 13, many of whom are youth who have grown up with Urban Tilth. Community members are hired and trained by Urban Tilth to use growing food as a vehicle for community transformation. The organization runs comprehensive programs in Richmond schools, with 40 kids meeting every day for a year learning about fresh, healthy food and the history of global agriculture, running a pop-up salad bar in school where all of the ingredients used in the salad was grown by the kids, and more generally having the opportunity to have conversations around food access with other.

The organization is also delving into the policy side of food justice, having launched the Richmond Food Policy Council in 2011 in collaboration with the Mayor’s Office. It is now a collaborative of agencies, organizations, and residents working together to create, address, advocate for and adjust food policies in Richmond, bringing underserved communities and other diverse constituencies to the food policy table.

“With the Richmond Food Policy Council we work on same issues that we address on the ground from a policy perspective in order to eliminate structural barriers to food access.”

The organization re-launched a formal CSA last year and is currently feeding 50 families through it. Robinson says they plan on raising that number to 150 with the addition of their new farm, which just broke ground in October.

“We’re thinking bigger,” Robinson says. “We have a 30-year lease on three acres of land and are developing a farm as a social entrepreneurial project. People in the community will have jobs transforming a space that has been derelict for 30 years into this community hub for healthy food.”

Plans for the new farm include a farm stand that will be the only daily fresh fruit and vegetable stand in Richmond, a café, a community commercial kitchen, an amphitheater, a watershed learning center, a bike shop co-op with Rich City Rides, an agricultural co-op incubator space to create meaningful employment opportunities for residents of North Richmond, and an expanded CSA program. The farm stand and CSA program will both be youth-run, creating educational and employment opportunities for young people in the community as well.

It will still take a few years for the extensive plans for North Richmond Farm to be completed, but progress is moving steadily forward.

“We’re going to be slowly growing our farm,” Robinson says. “This is literally a lot that had been vacant for the last 30 years and just dumped and dumped and dumped on, so it’s really a radical transformation of this huge vacant lot slowly becoming something that’s beautiful where people want to hang out.”

Re-launching the CSA was also big news for Urban Tilth to literally see the fruits of the labors.

“There is just a profound joy for me and the youth I’m working with to see the food we’re growing actually go to real people,” she says. “The land was trashed before. Our efforts are not just ‘cute.’ The produce actually goes into a box and people depend on it week to week.”

There is a subsidized CSA for low-income families, who only have to pay $10 every week for 10-20 pounds of food either grown by Urban Tilth or by other local farmers that are certified organic.

“It’s a kind of access people wouldn’t otherwise have. In Richmond, to have a place you can actually afford to have food that hasn’t been purposely sprayed with chemicals is something not common in this area. It’s also just a really amazing way to connect with people who are your neighbors who you might not even talk to or connect with, knowing this cabbage is for Brook and Kim and picking out an extra-special cabbage for them because you know they love cabbage.”

Just seeing the transformation of the farm helps to create these kinds of stronger community connections, Robinson says.

“First they see the transformation of the land from a dump space to, ‘Wow, it’s really pretty! Wait, I can get my food from there? And it tastes really good? And as I’m doing that it employs kids who wouldn’t otherwise have jobs?'”

A project like North Richmond Farm helps to heal the social disconnect and isolation that can happen in urban communities. Urban Tilth is focused on these kinds of “big” projects now, and looking towards to future Robinson says they also see a larger role for re-envisioning corner stores, an institutional staple of urban life.

“What would it mean for a block to say, ‘Let’s collectively run that store and work with local farms to have fresh produce in it and carry what we want’? We are focused on how we can reconnect broken parts of the city, reconnect with each other, and build relationships with each other both environmentally and socially.”