by Nicole RupersburgJul 19, 2016Society, Urban Innovator of the Week 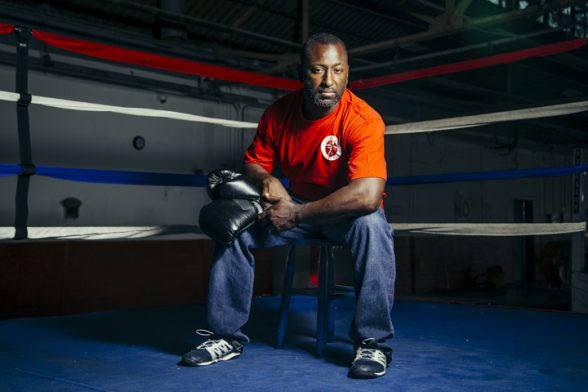 When Carlo “Khali” Sweeney first founded the Downtown Boxing Gym Youth Program in 2007, he did so solely with the intention of giving kids in his neighborhood on Detroit’s east side a safe place to go.

“We didn’t have rec centers in the area; most were closed down,” he says. “I wanted to give kids something to do and somewhere to go. Boxing was just what I knew.”

He wanted to focus on sports because he knew most people are attracted to sports. It could have just as easily been basketball or football or “anything else in the world,” he says, but as a lifelong boxer himself, he chose that.

“Boxing appeals not only to the kids but to the adults in the area too; really anybody in neighborhood,” he says.

But it wasn’t long before Sweeney realized the kids needed more than just a safe place to go. “They also needed academic help. They needed food. They needed exposure to other things than just what was in the neighborhood.”

So when friends of his wanted to come to his gym to train, he let them, but with one caveat: “I told them, ‘You don’t have to pay me to come, but you have to tutor one of our kids.’ It was a barter system.”

Then teachers and professors started coming in. Then other organizations started reaching out. Soon, the Downtown Boxing Gym was expanding its programming and its reach, helping the kids in ways that went far beyond just a mere boxing gym.

Even in the last few months, now nine years into the program, Sweeney says his perspective has changed on the organization’s goals.

“People used to ask me what was the best part of the day was,” he remembers. “I would say, ‘Just to see kids walk back through the door alive the next day.’ That’s actually changed. Just because you showed up the next day doesn’t mean you do the next day after that and the next day after that. We need to make sure that in the long term, not only are you alive but you’re also productive. I knew early on it wasn’t just a boxing gym but also a safe place to be and somewhere kids were not exposed to negative behavior. But they not only needed a safe place to go; they needed a place they can learn.”

The sheer quantity and diversity of offerings at the Gym is staggering, and boxing is just one small part of it.

“The boxing is a lesser component now,” says Sweeney. “I didn’t care about the boxing; I cared about kids getting a good start in education. You can have a boxing career but you get one injury and what’s your plan B?”

Sweeney recounts the story of a friend of his who once played for the Chicago Bears. All through college other people did his schoolwork for him and professors passed him through. He couldn’t even read. Then, he got injured.

“It was all over for him,” Sweeney says. “I’m always trying to scare kids away from that ‘I want to be a professional fighter’ mentality. Why don’t you be a doctor or a lawyer? Don’t let anyone tell you there’s no jobs in this and that field. There are no jobs in certain fields because all those jobs are filled. But how many guys can design a building? How many get into robotics or jet propulsions? In my 40 years I have never heard someone saying, ‘I’m going to jet propulsion school.'”

With the variety of programs offered, there is something to appeal to every child they serve – 120 of them in total, boys and girls ages 7-18 from all over the city. Every day three vans go out and pick the kids up wherever they live to bring them to the Gym.

It’s all the more impressive when you consider that every single class, every single program, every single field trip and hands-on experience is absolutely free, funded by donations, sponsorships, fundraisers, and organizational partners. All it costs the kids is community service – Sweeney’s only stipulation.

“When people walk through the door they see the boxing gym, but then on the other side they see the classrooms full; they see kids having fun. They say, ‘Wow, I’ve never been to a gym like this!’ They’re blown away by it.”

And the list of people who have been blown away by the Gym has some mighty powerful names on it: Rachael Ray visited last year to film a Thanksgiving special, bringing boxing royalty Evander Holyfield and Laila Ali with her. She also donated a brand-new gourmet kitchen and study area worth $500,000. Eminem’s Shady Records held an online fundraiser to benefit the Boxing Gym. And the Queen of Pop herself, Madonna, donated an undisclosed amount to the Gym after an “inspiring” visit in 2014.

Sweeney has also inspired people in other states who are starting similar programs based on his own, and he applauds it. He eventually wants to start a satellite system in areas they don’t currently reach and replicate the program in other cities.

With over 600 kids on the waiting list, Sweeney has the demand to grow, and he wants nothing more than to be able to serve every single child he can.

“The streets don’t have a waiting list,” he says. “Those kids can’t put life on pause or on hold. Life is going to happen. We need to get these kids off these streets and doing something positive.”