by Nicole RupersburgMay 24, 2016Urban Innovator of the Week 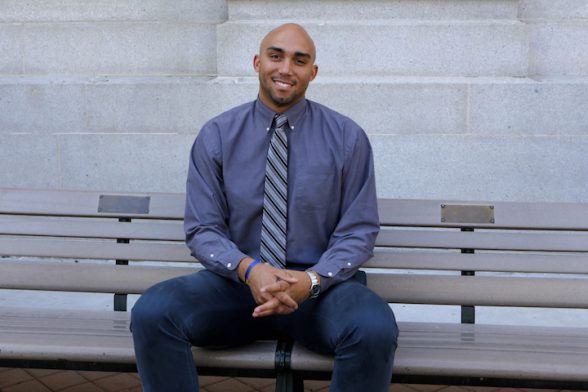 Brandon Nicholson, Executive Director of Hidden Genius Project in downtown Oakland, was born and raised in Oakland and attended Oakland Public Schools before attending prep school in Marin County. Seeing the contrast between Oakland’s schools and the prep school sparked in him an interest in education equity and policy, so he studied policy during his undergrad at Princeton and went on to earn his Ph.D. in Educational Policy from UC Berkeley.

“In that time I was really enthralled by issues around access and justice, and people from different backgrounds being able to engage in these opportunities and build a high quality of life for themselves,” says Nicholson. “I have dedicated my life to improve opportunities for folks who cannot advocate for themselves.”

Hidden Genius Project was founded by a group of five Black male entrepreneurs and technologists who had gone to Harvard together and had determined it was important to provide young Black males in the Oakland area with an opportunity to engage in the ongoing tech boom, introducing them to the pathways and skills they can use to become high-performing entrepreneurs and technologists in the modern global economy.

When they founded the Hidden Genius Project, they reached out to Nicholson, whom they knew was from Oakland and had a background in education policy. He came on board as a pro-bono consultant, and they all worked together on the project as an entirely volunteer-driven effort, with everyone involved still working their full-time jobs and not taking a salary.

The very first cohort of five male high school students began in the summer of 2012, with full days of instruction Monday through Friday for the duration, and Hidden Genius ran like that every year until 2015.

“We realized it wouldn’t be sustainable so they brought me on as Founding Executive Director,” Nicholson explains. “I was the first staff member.”

The vision was there, he says, but everyone working on it was too busy with their full time jobs that they didn’t have the bandwidth to pursue funding. When the Rockefeller Foundation took an interest in their work and gave them seed money they were finally able to take the project full-time.

Hidden Genius Project now has two main arms of programming: “Catalyst” and “Immersion.” Catalyst programs are free single- and multi-day events and workshops held throughout the year with the express aim of igniting interest and exposing Black males to mentors, basic computer programming, and pathways to careers in tech.

“We really just look for them to be really interested in doing this for two summers in a row, bookending the school year,” he explains. The program runs daily Monday through Friday during the summer and continues during the school year with meetings once a week and one Saturday per month, plus students also put in office hours.

By the end of the program, students will have spent over 800 hours of time with Hidden Genius.

The application process is “intentionally clunky,” Nicholson says. They are looking less for high scores on standardized tests and minimum GPA requirements than they are for a genuine interest on the student’s part. In the initial application, the student must explain why he is interested in the program. If his answer shows serious effort, he is invited in for an interview.

40 volunteers assist with the interview process, bringing all the potential candidates in to get a better feel for each of them and “how committed they will be.”

“Some of these guys are not always going to be the most outgoing or the most articulate all the time, but we can get a sense of where their hunger is or if they’re hungry at all,” says Nicholson. “We might have a guy who is hungry but he’s struggling in school,” which is why they don’t rely on academic metrics.

For the latest cohort starting on June 22, they had over 70 applications, brought in 45 students to interview, and accepted 22 of them.

Students are a mix of Black male high schoolers: kids from private schools, public schools, single-parent households, households with two college-educated parents, and a wide range of socioeconomic backgrounds. “There is a lot of shared experience from the Black male perspective but there is also a difference in their day-to-day material realities. It’s important to have a mix.”

Tuition is entirely free and students get a stipend and meals as well as their own computers to work on (which they can keep upon completion of the program).

Hidden Genius has partnerships with Oakland schools and districts, including the African American Male Achievement program of the Oakland Unified School District (the first program of its kind in the country), but also relies heavily on referrals and word of mouth. Nicholson says they also have contacts with other districts in the Bay Area and get students from the Mission and Berkeley, but most of their direct outreach is done in local public schools.

“We try to be intentional in engaging young men; the guys who aren’t necessarily high flying but guys who have potential at the bottom,” he says.

Over the course of the program, students build a software project from conception to creation, including programing to design, as part of their technology creation and software development education. Hidden Genius Project also emphasizes entrepreneurship, so students learn to be self-empowered, and leadership is a major focus as well. “We’re trying to raise these young men into the highest quality people they can be so they can perhaps one day be in a position to uplift their communities by being great citizens and maybe even hire within communities.”

Some of the students might go on to college to study computer sciences, and some might jump into working for themselves right away. Whatever they choose to do after the program, Nicholson says, “Fundamentally we just want them to be in a better place than when we got them, so they can understand that working for themselves is an option, or that they can work for people in the community building websites and applications; there is a wide range of potential opportunities. Also, we want them to know that, no matter what, they have that ability to leverage those skills and develop more skills to make them more marketable and enable them to thrive in their communities.”

Part of the Hidden Genius Project’s mission is to also educate their students on the culture of Silicon Valley – and that they might not like it, even if social barriers were eliminated.

“Even if companies were hiring from a more diverse pool of applicants and underrepresented groups, that doesn’t mean their experience will be positive,” says Nicholson. “A culture of respecting experiences across backgrounds also doesn’t necessarily mean these companies would be excited about their work. It’s important for our students to understand that no matter what they do in life, they can be their own agents to leverage their skills and pursue their own interests.”

Hidden Genius wasn’t built to solve Silicon Valley’s diversity problem, and Nicholson acknowledges this. Still, the organization works to address some of the struggles young Black men have in the tech industry, and empowers them to create their own opportunities.

“Those factors related to class and race are very real in our society, not just as barriers to opportunities or education, but sometimes being overlooked based on socioeconomic status or just outright racism,” he says. “There are those companies that understand the need to be more diverse or see that benefit or potential, but we want our students to realize they don’t have to wait on a paradigm shift in order to succeed.”