by Nicole RupersburgDec 6, 2016Society, Urban Innovator of the Week 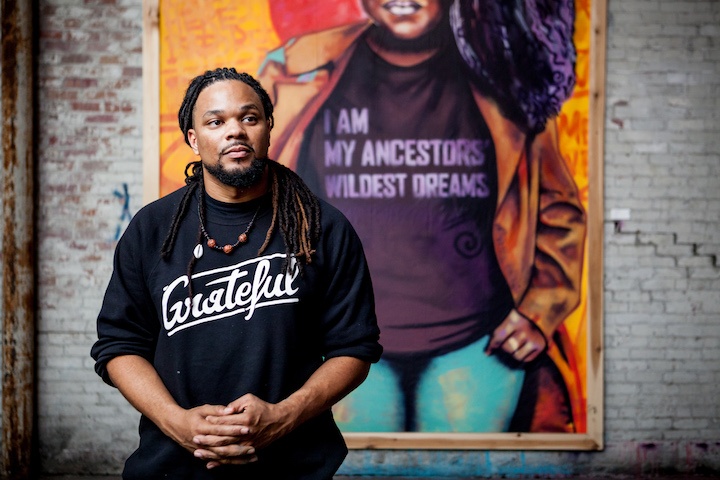 Brandan “Bmike” Odums is from New Orleans but has lived all over the world as a “military brat.” This experience gave him a different perspective from his peers, seeing the world of New Orleans through a much wider lens. He pursued an education and career in the arts because it was something he always had a talent for, studying videography and film in college then taking a job at a public access television station, which set him on the path he is on today.

“It was an interesting space where elders and people in the community went to get up on their soapboxes,” he says. “I had no choice but to be there and listen to the words of all the individuals and elders. These people didn’t care about presentation; they were just sitting on a chair talking for 30 minutes.”

Odums knew that most people would never actually watch these people sit on a chair and talk for 30 minutes, but they were speaking about hot-button issues and speaking their truths as members of the community and residents of New Orleans – truths others could benefit from hearing.

So he started an organization called 2-Cent Entertainment, an entertainment company that was also a youth education social enterprise. 2-Cent was his attempt to take what he was seeing at his job and compete with the likes of BET and MTV, getting the attention of young people by creating content responsive to issues like the education system in New Orleans, the devastation and aftermath of Hurricane Katrina, and motivating kids to read in a style that kids who have grown up in the social media era would respond to. In the eight years he spent running 2-Cent he strove to show how art is connected to community service, and also ran youth workshops and summer camps.

At the same time, as a professional videographer and filmmaker, Odums was also directing music videos. This work took him through a number of different buildings that had been abandoned post-Katrina that were filled with amazing pieces of street art that no one else would ever see unless they also took the time to do their own urban spelunking through these abandoned structures. The artwork inspired Odums, who started out as a visual artist and attended the New Orleans Center for Creative Arts (NOCCA) high school before focusing on film in college.

He began painting his own murals inside the ruined remains of an abandoned public housing development in the 9th Ward that was destroyed in the post-Katrina floods. His massive murals depicted Black civil rights leaders throughout American history, from Frederick Douglass and Martin Luther King, Jr. to Nina Simone and the Black Panther Party.

“Basically I painted people I really admired throughout history,” he explains. “Since high school I’ve always found an excuse or a reason to draw or paint people I’ve always looked up to. For me it’s a way of connecting with them. Painting those portraits was uplifting. I didn’t do that work in this first project with the thought that everyone in the city would see it.”

He says painting these portraits is a very intimate experience – the artist is forced to stare at the person’s face for hours and that forces a connection to occur. If he was listening to Nina Simone or Gil Scott-Heron or John Coltrane, or reading a James Baldwin novel, he might then decide to paint a portrait of them.

“It’s this dance of getting to know and getting connected with that individual,” he describes. “Also knowing this was not only happening to me but it was doing something to viewers too.” The bitter irony of seeing a portrait of the Black Panthers, with the knowledge that part of their ten-point platform was “We Want Decent Housing Fit For The Shelter Of Human Beings,” painted on a wall in an abandoned housing complex during a housing crisis was not lost on Odums or on anyone else who viewed it. His work was having an impact.

He called this series of murals that he painted over the summer of 2013 “Project BE.” As word began to spread about the work Odums was doing and it began attracting the attention of major media, the Housing Authority of New Orleans, which still owned the property, caught wind of what he had been up to and eventually forced him to shut it down for safety and liability concerns. But this “underground” project had already taken off – a local teacher, whom Odums describes as “one of those renegade types,” took a school bus full of her students to see the works. Another principal brought her staff to the space.

“I immediately saw how this was important for the teacher to show not only why art is important, but also this civil rights history,” says Odums. “Project BE was all illegal; it was never intended to be anything. People just sort of demanded it be something. People wanted to find the work and share the work.”

Odums was inspired to continue, this time in a privately-owned but unoccupied space where he was permitted to exhibit for three months so long as his team supplied insurance and provided security during the times the space, called Exhibit BE, was open. Odums invited 35 other artists to help him transform the space, and they were open to the public every Saturday for those three months and also offered school tours during the week.

“We started the school tours so more people could see the work and also because it was a cool way to expose the work and for artists to speak about their work,” he says.

When that came to an end, another opportunity presented itself to Odums in the form of a 35,000-square-foot warehouse in the Bywater that he currently leases as Studio BE.

He calls this “the last of the trilogy,” the culmination of the work he started with Project BE and continued through Exhibit BE. Studio BE is all his own work, a solo show with everything painted on canvas instead of directly on the walls, the first of his projects in which all the artwork can be moved elsewhere and live on once the show is over.

School tours are a huge component of Studio BE. With his current space, Odums knew it would be used for education so many of his paintings are about specific, powerful moments in history. Docent-led tours bring in up to 100 students at a time, breaking the kids up into groups of 15 for 90-minute tours. Afterwards, depending on the ages of the students, they will then engage in a physical activity like coloring or have a debate on what they just saw.

But for Odums, the opportunity to engage with local youth around his artwork means more than just an art or history lesson.

“For me it’s about the power of identity,” he says. “These students are mostly Black and are from New Orleans. Most of what I paint are narratives from history – people like Martin Luther King, Jr. and Coretta Scott King, individuals who are lionized in history. Then the other half of what I paint is just regular people in New Orleans, my friends and neighbors. To me it’s about understanding the value of everyday people and knowing you have value, you’re worth something. Portraits in general were often reserved for the rich and royalty, so doing a portrait of a person lends to the idea of that person being valuable.”

One of his favorite moments underscoring this idea was when he asked a 14-year-old male student what his favorite painting was and he pointed to a portrait of a young Black man, one of Odums’s friends.

“He said, ‘That’s my favorite because he looks like me.’ I could never look at a painting and say ‘that looks like me’ while I was attending NOCCA and we visited museums. I didn’t see myself reflected in the art industry enough to want to pursue it after high school. It’s a huge thing to have a huge a space completely dedicated to their own experience.”