by Nicole RupersburgAug 30, 2016Society, Urban Innovator of the Week 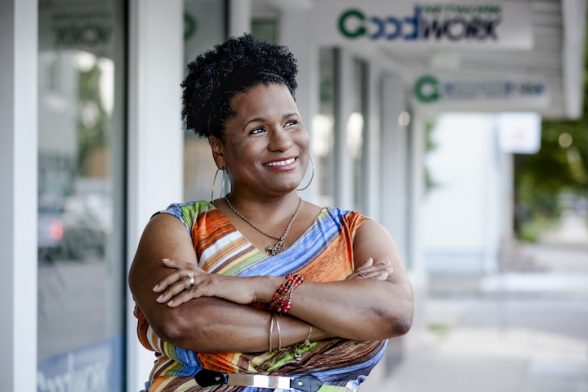 When Adele London was interviewed for the job at the Good Work Network in New Orleans, she didn’t even know she was being interviewed.

“I just thought they were interested in our work at the Residential Loan Corporation!” she laughs.

London has a background in small business development and worked for theHousing Authority of New Orleans at the Residential Loan Corporation, which was designed to “empower, educate, and invest in small public housing projects and resident-owned businesses in Section 8 areas.” She says, “The population that we worked with was largely underserved; none of those folks would be able to get anywhere near a bank or be qualified to get loans.”

After that, she says, it was all hands on deck just to locate people. Priorities shifted.

An organization called the Mennonite Economic Development Association(MEDA), seeking to help bring small businesses back in New Orleans, placed London at GWN, then a small nonprofit organization with only three employees and a budget somewhere around $200,000.

By 2009 she was the Director of Business Development serving under-resourced communities, including minority and female entrepreneurs, and “micro entrepreneurs.”

‘We are micro entrepreneurs; that’s what the city is made of,” London says. “The Small Business Association tends to look at economic drivers and employers, but the barber shops and salon owners and the people keeping the neighborhood and local economy going are not necessarily getting their full credit as contributing to the economic engine of city. They didn’t necessarily see the micro entrepreneurs’ contributions to the economy as a major force.”

With the relatively recent emphasis on banging the “local economy drumbeat,” London says, “That has definitely changed people’s perspectives and now there’s a whole body of research our there to support what I always knew.”

“The ‘Network’ is the biggest part of our name,” she says. “We do good work but really we’re about the network and connecting entrepreneurs to resources that they need so local entrepreneurship can build capacity and entrepreneurs can build networks. For a long time micro entrepreneurship was all about business planning, and all of that is very important, but the bigger piece is market access;that’s a big deal.”

Traditionally minority and women entrepreneurs, particularly in construction, are not necessarily part of the networks and groups with access to opportunities, so Good Work Network really started off in the public sector with a program called ConnectWorks, which connects entrepreneurs with certain sectors, primarily construction (due to the amount of rebuilding going on in the region).

“ConnectWorks is about connecting entrepreneurs to opportunities, not just training and training and sending them on their way with their business plans,” London says. “How do you become part of a supply chain for hospitals and schools? It takes a lot of navigating. It’s really hard for a small contractor with staff of two to maneuverer that and figure it out. We trying to help bridge that gap.”

They also work with various institutions, health systems, and universities to initiate the conversation and create the sense of urgency that hiring within local companies could actually impact the communities they’re in, emphasizing the importance of supply diversity and being intentional in their practices to incorporate local and minority contractors.

“It’s not been easy,” says London. “Having a billion dollar organization sitting in your neighborhood with just pennies injected into the local economy is insane. We’re trying to get them to not make the excuses they normally do of ‘national contracts.’ ‘Okay, how can we change that?’ They are beginning to do more; I’m not going to say we’re batting 100 with that, but definitely moving the bar some.”

“We’re trying to make sure that small and micro entrepreneurs, minorities and females are not left out of that loop and it’s not just your Halliburtons coming in with these huge contracts and our folks on the ground doing the actual work were tier 7, not making any money,” London explains. “We’re trying to make sure their access is not at these sub par levels, that they can actually be a part of the conversation and sit at the table and participate in a meaningful way. We want to make sure that they have the education and expertise that they need so that they can then go after the opportunity and are ready for it, and not watching companies come from all over the country and get these contracts without knowing how to even get there.”

Instead of what happened in the wake of Katrina, she says, when multi billion dollar cleanup and restoration efforts didn’t make any economic impact in the local community at all.

“You definitely have to be committed to what you’re doing in this space,” she says. “You have to be happy with lots of small wins. It’s definitely a labor of love.”

But the water industry isn’t the only one in New Orleans with ample opportunities for entrepreneurs. The booming local food economy – certainly happening all over the country, and most certainly in New Orleans – is an entry point for many aspiring entrepreneurs who want to grow their own food businesses, whether that be a catering company, a small bakery, or a food truck with brick and mortar aspirations.

To address this growing need for a hub for food entrepreneurs to pilot their concepts and learn how to run a food business, the Good Work Network opened the Roux Carre in December 2015.

“We went through it with the resolve that if the entrepreneurs did not reflect the people we work with, we were willing to scrap the whole thing and start over,” says London. “If we went by ‘who is the best entrepreneur in this stack,’ we had restaurants that already existed that were looking to expand in a new model, but we’re trying to help these other folks grow into these established businesses. The whole point of the place was to grow budding business. We weren’t looking for the fastest, strongest vendors; we were looking for vendors with the most potential that reflect the neighborhood.”

The resulting vendors serve a variety of African American, Latin, and Caribbean foods. The Youth Empowerment Project also has a booth where they sell snowballs, smoothies, teas, wraps, and salads.

“We wanted to have a place for young people to have some kind of exposure to entrepreneurship, so for the Youth Empowerment Project we said we’re giving them a space to give Black youth in the city exposure to workforce development and life skills. That was one of the commitments we wanted to make to community there.”

The above-mentioned programs represent only a small portion of the entrepreneurship support programming offered through the Good Work Network and the ways in which London and her colleagues work tirelessly to provide economic opportunities for minority- and women-owned businesses.

Anybody can go to Good Work Network and become a member, perhaps starting out in entrepreneurship training or a pre-venture class. With services in financial literacy, administrative support, credit counseling, training, capital access, and micro-loans, GWN provides everything an aspiring entrepreneur needs from the initial idea stages through development, execution, and ongoing support.