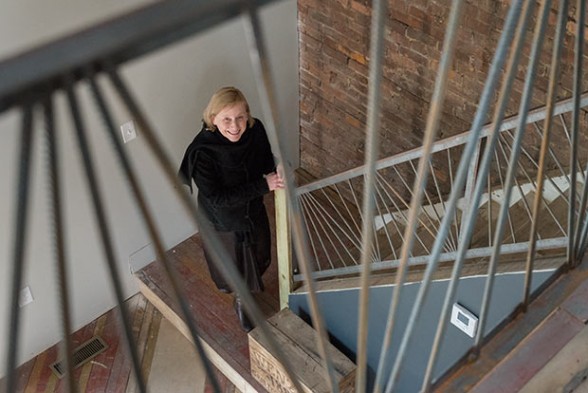 The Cleveland Urban Design Collaborative(CUDC) is the combined home of the urban design graduate program at Kent State University and the public services activities of the College of Architecture and Environmental Design.

Students focus on graduate architecture, urban design, or landscape architecture studies and work on community-based design projects under the guidance of professional staff as part of their CUDC curriculum, so that they experience the work first-hand and understand that the planning challenges they experience are widespread, indiscriminate problems, and not just limited to specific neighborhoods.

The CUDC also operates a nonprofit urban design practice that works in neighborhoods throughout Northeast Ohio. Terry Schwarz, Director of the CUDC, says their work “runs the gamut from advocacy – trying to promote better outcomes for the city and city neighborhoods – to specific programs, like neighborhood master plans and design studies.”

Schwarz, who has a Bachelor’s in English from the Illinois Institute of Technology and a Master’s degree in City and Regional Planning from Cornell University, has been Director since 2000. At the time, she says, the focus of the CUDC’s work was on walkable, mixed-use communities.

Back then, the focus was entirely on housing development – as much and as quickly as possible. The City of Cleveland had a goal to get its population back up over 500,000; at it’s peak, the city had over 900,000 residents, but by 1990 it had dropped to under 500,000, which had huge repercussions for federal funding. The goal of the city was to build as much housing as possible, so the Residential Property Tax Abatement program was launched, eliminating 100 percent of the increase in real estate property tax for up to 15 years and incentivizing a flurry of housing development even in distressed neighborhoods.

Schwarz launched the CUDC’s Shrinking Cities Institute in 2005 in an effort to understand and address the implications of population decline and large-scale urban vacancy in Northeast Ohio. As an outgrowth of the Shrinking Cities Institute, Schwarz established Pop Up City in 2007, an action-based research program that explores ideas for urban reinvention through temporary interventions.

The city had already been seeing some long-term vacancy as a result of this rash of new development. Then 2008 happened.

At that point the CUDC began working on vacancy and reclamation design projects that looked at the huge problem the city was facing, thinking through the question, “How can we be strategic about where we demolish and where we reinvent?”

Their Re-imagining a More Sustainable Cleveland initiative grew from that, a collaborative effort to address population decline and large-scale urban vacancy in Cleveland that affected almost every city neighborhood. They worked with the City of Cleveland and over 30 different partner organizations throughout the Northeast Ohio region. The goal of the initiative was to address vacancy issues by introducing non-traditional urban land uses to city neighborhoods.

“We wanted to show that land surplus real estate in urban neighborhoods was something to be capitalized on rather than a liability to be managed,” says Schwarz.

The final report included a replicable plan, policy recommendations, zoning changes, and demonstration projects for sustainable land reuse, and has influenced a planning effort in Detroit as well as policy initiatives and funding programs developed by the U.S. Department of Housing and Urban Development and the U.S. Environmental Protection Agency. It received the American Planning Association’s 2012 National Planning Excellence Award for Innovation in Best Practices for Sustaining Places.

Cleveland is currently one of 12 cities sharing in the Kresge Foundation’s $8 million Climate Resilience and Urban Opportunity Initiative. The CUDC is a partner in this initiative, working on a climate resilience plan on a neighborhood scale to reflect the needs of underrepresented residents.

“A lot of the work in environmental sustainability planning is thinking how we can mitigate the impacts of the changing environment and reduce our carbon footprint, but how do we buffer the impact in our neighborhoods? Those are the people harmed the most by it,” Schwarz points out.

When people think of the geographic areas most impacted by climate change, they might think of the drought- and hurricane-battered coasts and Sun Belt, but the Midwest has also been profoundly affected by climate change with increasingly frequent and extreme storms and extended periods of high heat. Part of the CUDC’s work is to create physical interventions that use their resource of 25,000 vacant lots to mitigate the effect of heat islands – urban areas that are significantly warmer than surrounding rural areas due to human activity – and manage storm water runoff.

The CUDC is mapping out the city’s heat island vulnerability to determine which parts of the city are most affected by it so they can then try to mitigate it.

“Our nickname is ‘Forest City’ yet the forests have been pretty dramatically depleted due to deforestation,” says Schwarz. “What we’re trying to do with this work is strategically plan where to plant trees to reduce energy bills and heat islands. Really, tree planting is one of the most important tools in our toolkit.”

One of the CUDC’s community engagement programs is called Making Our Own Space, a collaborative effort between Cleveland youth and local design professionals that engages middle and high school students and trains them as community designers. Over the course of nine months, the kids design and construct multiple public environments and outdoor playscapes.

“These kids are envisioning and also building a temporary outdoor space,” says Schwarz. “They make and remake the space, and in the process they learn how to be designers. It’s about fabricating a place and inviting people in to see how they use it.”

Schwarz reflects, “Some days I think we can make and remake the whole world, but some of the factors affecting people’s lives are beyond our control. People always bring the conversation back to basic health and safety issues in community meetings, and the limitations of urban design to address those things is so frustrating at times. Some places have good public spaces and mature trees but have underlying issues – lack of economic opportunities, lack of education opportunities. The real opportunity we have is helping people discover how to feel comfortable in their own neighborhoods. You shouldn’t have to move to feel at home in your neighborhood. Whether it’s safer bike lines or direct paths to schools, these small-scale physical interventions can really impact people’s lives.”

As far as training their graduate students, Schwarz says some of the most valuable experience they get is dealing with the real world.

“After all of these years I can say that there is no one urban design approach that makes sense in every place or in every moment,” she says. “As an urban designer, you get out of school and you think you know what you’re supposed to be doing, but then you realize a lot of it has to be improvised as you go.”