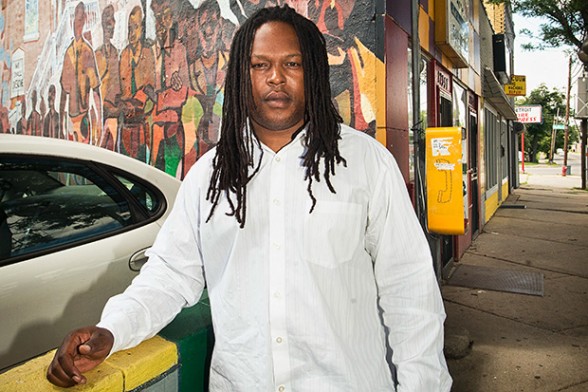 Right now Senghor is in the middle of a book tour for his memoir, Writing My Wrongs, currently on the New York Times best-selling list for nonfiction three weeks running.

He says that what drives him to do the work that he does is to put a human face on incarceration. He does this largely through his writing and speaking, now his most powerful weapons after putting the violence of his youth behind him.

In 2014, he appeared at the official TED conference. His talk, “Why your worst deeds don’t define you,” became one of the most popular TED talks of that year, highlighted by TED in the annual “Year in Ideas” roundup and pulling in over 1.3 million views to date. Just a few weeks ago, he also appeared in an episode ofSuper Soul Sunday with Oprah Winfrey, who said their conversation “touched her soul” and was one of the best of her life. He was interviewed for Salon. And just last week, he appeared on The Daily Show with Trevor Noah.

A lot has changed for Senghor since Urban Innovation Exchange first covered him in 2013. At that time, he was an MIT Media Lab Director’s Fellow where his work on The Atonement Project started, a platform that uses creative expression to engage participants in tough conversations about crime, punishment, and reconciliation, and creates a dialogue about personal and communal healing.

He had also won the $25,000 Black Male Engagement (BMe) Leadership Award from the Knight Foundation in 2012 for his Live in Peace program, a mentorship program that helps youth resolve conflict through literary and visual arts. He was a 2014 TED Prize finalist for The Atonement Project; he won the 2015 Manchester University Innovator of the Year Award; he has taught at the University of Michigan; and he is currently a Fellow in the inaugural class of theW.K. Kellogg Foundation’s Community Leadership Network.

But these are all the nuts and bolts of his story, the kind of information readily available with a quick Google search of his name; a checklist of journalistic facts to tick off one by one before moving on to the next person, the next subject, the next job. This tells you who Senghor is on paper; now you need to know who he is on paper.

I cannot speak personally on the subjects Senghor writes about Writing My Wrongs. He writes about Black identity from his own perspective as a Black male. He writes about street life in Detroit during the height of the 1980s crack epidemic. He writes about his experiences within the prison system during the apex of the mass incarceration phenomenon, when the country’s prison and jail populations increased by about 500 percent in three decades (peaking in 2009). He writes about prison violence and the uneasiness with which he had to continue to abide by the “prison code” – which mandates violent retaliation when one is disrespected so as not to appear weak – even after he reached a point where he no longer wished to engage in violence.

He writes about the vile treatment from white guards against Black inmates and the retaliation of the old boys’ club against inmates who embarrassed one of their own. He writes about the sickening stench of the “administrative segregation unit” – solitary confinement – and how inmates even there, stripped of nearly all their dignity, reduced to their most base humanity, still found ways to retaliate against the administration and each other in an effort to reclaim their own sense of individuality and humanity in ways that might seem utterly beastly.

He writes about the pain of growing up with an abusive mother, his deep longing for love and to feel protected and wanted, and how that pain translated into his own violent, destructive behavior, turning him into what he says the prison system considers “the worst of the worst.”

He writes about finding solace and purpose in the writings of Black activists and novelists like Assata Shakur, Donald Goines, George Jackson, and Malcolm X to novelists and philosophers Stephen King and Plato. He writes about writing as his salvation.

His world is as foreign and incomprehensible to me as that of a Syrian refugee’s – I can have the utmost empathy, but I can never truly understand. Nothing about his life experiences are similar to anything I have ever experienced in my own life, and yet still the intimacy of sharing this human experience through his writing has a profound effect.

And that is what it means to put a human face on incarceration.

He describes Writing My Wrongs as being “about everything that came on the other side of that experience” of his life as a teenaged crack dealer, getting shot, and finally shooting and killing a man over a drug dispute. He doesn’t skim over any of this; all of it is told in full detail without flinching.

“I was able to transform my life and really turn things around,” Senghor says. “I think it’s really important to talk about it because so many people in our community are impacted by it. I felt it was really up to me to speak to the issue and be a voice to people who get caught up in that culture, and also be a cautionary story of those outcomes.”

Senghor says he represents the majority of men and women who are incarcerated: people who actually did commit the crimes for which they are imprisoned. “It’s important for the American public to understand that we can bring home healthy men and women, but you can only do that when you actually give people hope and second chances.”

In his famous TED talk he says that he envisions “a world where men and women aren’t held hostage for their past.” As a criminal justice reform activist he wants to “get rid of the ‘lock them up and throw away the key’ mentality.”

Senghor is now the Director of Strategy for #Cut50, a national bipartisan initiative to reduce the prison population by 50 percent by 2025. The United States currently houses 25 percent of the world’s prisoners, yet has only 5 percent of the world’s population. In this country we spend $80 billion annually on the incarceration industry, and it is an industry that is systemically prejudiced – Black prison admissions is nearly four times their proportion in the population.

Michelle Alexander, an ACLU lawyer turned Ohio State law professor, wrote in her 2010 book, The New Jim Crow: Mass Incarceration in the Age of Colorblindness, that “mass incarceration [is] a stunningly comprehensive and well-disguised system of racialized social control that functions in a manner strikingly similar to Jim Crow.”

Racial disparities in incarceration persist over time and across all education levels, and continue even within the returning citizen population: low-skilled white males are still ranked in the economic hierarchy at the same level or higher as low-skilled Black and Hispanic men without criminal records.

#Cut50 works with leading groups and voices across the political spectrum, utilizing grassroots strategies to educate and mobilize people in conjunction with grasstops media and influencer reach, working with entities like the White House and people like Alicia Keys and Russell Simmons, as well as unlikely allies like Newt Gingrich and Koch Industries, to leverage their high visibility and influence to work on behalf of folks whose voices are universally silenced in a call for a comprehensive criminal justice reform bill.

Senghor is also the co-founder of Beyond Prisons, a #Cut50 campaign that uplifts the voices of those impacted by the criminal justice system, a further extension of his work to put a human face to incarceration and win hearts and minds towards the idea that transformation is possible.

He still does mentoring work in youth homes and high schools, and is focused on continuing his career as a writer, building on the tremendous success of Writing My Words.

Senghor’s story is a remarkable one, in part because of the success he has achieved and the impact he has been able to have since his release from prison, but also because the ability to achieve such success and have such an impact after 19 years of incarceration is considered to be so remarkable.