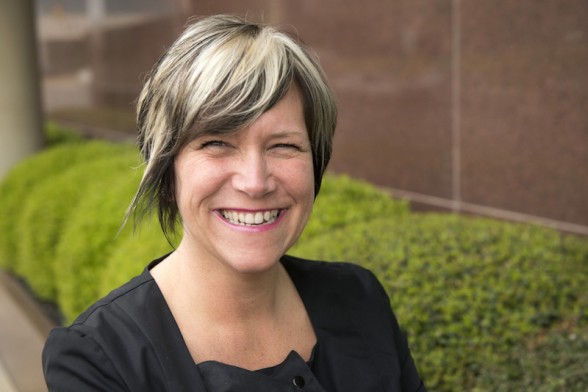 Leslie Smith, President and CEO of EPIcenter Memphis, lived in Detroit her whole life. She previously worked with the Michigan Economic Development Corporation and was actively involved in an advisory role with the Living CitiesIntegration Initiative in Detroit, the Detroit Innovation District initiative launched by the New Economy Initiative of Southeast Michigan (NEI) and the Brookings Institute, and NEI’s NEIdeas business development grant program.

As President and CEO of TechTown Detroit, the city’s most established business incubator and accelerator, Smith was a key player in ushering in a new era for entrepreneurship in Detroit.

TechTown has been at the forefront of small- and large-scale business and economic development efforts, launching bootcamp-style entrepreneurship programs and innovative programs targeting the communities and populations too often left in the dust of economic expansion.

“SWOT City was the benchmark program in carrying out economic development to marginalized communities,” Smith says. “After seeing the bulk of the enthusiasm focused on the city center, we thought to carry those opportunities to the neighborhoods.”

Then, almost exactly one year ago, Smith was lured away from the city she helped reshape to Memphis, where she has taken all that she learned from Detroit and is implementing it as President and CEO of Entrepreneurship-Powered Innovation Center (EPIcenter) Memphis.

“The role of EPIcenter is catalyzing an entrepreneurship movement in Memphis that has been underway in the last decade or so but has not necessarily been connected in a networked fashion, or in a way that Memphians saw themselves as being part of the movement,” says Smith. “I can apply the things I’ve learned in Detroit to a very similarly situated city with some different conditions and opportunities than in Detroit, in particular in inclusive economic expansion.”

She laughs, “When you do something for a number of years learn what you should and shouldn’t do!”

With TechTown’s SWOT City, she says, they were “the first ones in” – “When we entered Brightmoor,” a divested community far outside the focus areas of investment in a rapidly redeveloping Detroit, “it was a pretty provocative move. In Memphis we’ve already sort of crossed those hurdles. We’re now finding programs that are working here and scaling them across the city. There is already real intentional investment in entrepreneurship within communities in Memphis that will allow us to accelerate those activities even faster than in Detroit.”

Smith says Memphis shares many of its more challenging circumstances in common with Detroit – high unemployment, high poverty rates, low education attainment, high crime rates. “But just like Detroit, that’s not necessarily the most productive national narrative – it’s not all the scary things you see on TV. I firmly believe the antidote is entrepreneurship and economic development,” she says.

EPIcenter Memphis is a program of the Greater Memphis Chamber’s Chairman’s Circle. It is a collaborative and community-wide strategic initiative coordinating resources from various organizations such as accelerators, incubators, mentors, investors, networking and technical assistance programs to help entrepreneurs conceive, launch, and scale businesses in the Memphis region.

Much of this work is being done by coordinating the efforts and resources of organizations already doing such work, and connecting all of them together as part of a single entrepreneurial ecosystem. Funding for this initiative is a cross-sector blend of corporate sponsorship, city and federal funding, philanthropic support, as well as seed funding from the founding agency, the Greater Memphis Chamber. The goal of EPIcenter is to create 500 companies and 1,000 entrepreneurs by 2024 through four areas of support: idea creation, development, funding, and growth.

“There were singular entrepreneurship assets or programs in Memphis already, but there was no sort of organizing hub for those activities,” Smith explains. “EPIcenter was created to be the key visioning and strategist effort for the entire entrepreneurial movement. It is responsible for the health and well being of the entire network. We’re working with over 65 partners across the city to make sure the entire network is functioning.”

Smith and her colleagues spent the first year understanding the people and players in the Memphis entrepreneurial ecosystem, identifying what the strong programs were and some of the gaps in the landscape so as to really map out the strategies that tied to the current conditions in Memphis. From there they focused on hiring their startup team, activating some new programs, and aggressively fundraising.

Although the first year was primarily a “year of discovery” for EPIcenter, it has already led to some new collaborations that hadn’t previously existed, including acitywide joint demo day, a “super accelerate” with seven accelerators from across the city hosting a joint event with breakout sessions, and it is also already scaling some established neighborhood-based entrepreneurship programs, like LAUNCH in Chattanooga which focuses on underrepresented and under-resourced communities.

The community partners already doing the on-the-ground work are invaluable to the success of EPIcenter, as are focused community engagement efforts. “You always have to build a program like this from the ground up; you can’t swoop in and try to prescribe for folks what strategies are best going to help them achieve their goals, and these tables will really help us to draw that out.”

The year of discovery is over, says Smith; this is the year of execution.

“In April we’re launching a $100 million fundraising campaign to really bring in capital and programmatic support over these next several years. We have added some talent programs that help us attack both ends of talent spectrum; we have expanded our tech acceleration programs; and we’re launching a new angel investment fund for the gaps that we identified. Now we can start having an impact.”