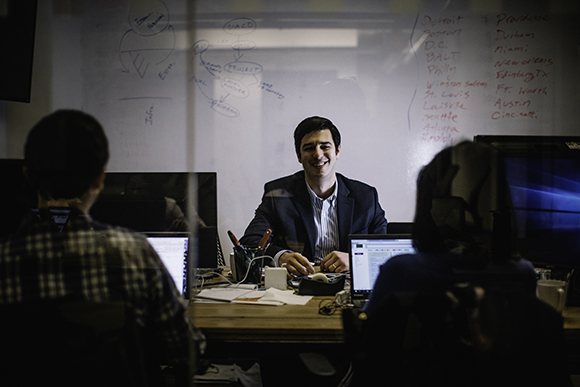 Over 10 years of working in community development in Philadelphia, Gregory Heller saw first-hand the pronounced disconnect between the people working to rebuild their communities and the people who have the resources to invest in urban areas.

“I didn’t feel those two worlds were connecting,” he says. “I was working in community development and saw that there are people with big money out there but it’s not connecting to these communities. So how do we change that value proposition?”

The goal of American Communities Trust (ACT) is to try to bridge that gap and connect the world of private investment with meaningful community building and community change. ACT is a national community development partner, based in Baltimore and Philadelphia, dedicated to building social impact in urban and low-income communities across the country.

As CEO of ACT, Heller works with private sector clients investing in low-income communities and helps them make responsible investments, aligning them with place-based nonprofits and community development corporations to help plan, finance, and build their projects and connect them with national avenues for capital. ACT works with major private sector clients like Capital One and Wexford Science + Technology to help them connect with the communities they’re serving in more impactful and dynamic ways.

“I think it’s an area that has a lot of need,” he says. “Working in community development, I learned that the most important projects in our society are built by the people least equipped, least capitalized, and least experienced to carry them out, and that’s a problem. The money people need assistance in terms of strategies to use that capital, and the clients we’re working with are really looking for ways to spend their investments more wisely. I don’t think there are a lot of folks to help advise them on that front.”

Social impact development projects tend to go something like this: a nonprofit organization or community development corporation sees a development need to serve the community. In order to pursue this development, they must piece together funding from a variety of different and often disparate resources, which might include foundation and government grants and tax credits in addition to whatever loans they are able to secure, which are likely to be limited for what are considered high-risk, low-return development projects. All of these funding sources also act individually and need to be coordinated – a complicated, time-consuming, daunting process.

In short, every social impact development project is the result of sometime years of creative funding cobbling, working within the same system and with the same expectations as private, profit-based development. This is a system that, Heller says, simply does not work.

“We’re treating nonprofit development and socially-minded for-profit development the same way as profit-motivated luxury condo developments,” he says. “The competitive world of real estate development doesn’t make sense if you’re trying to build a community-centered project. We really need to change the whole system and turn it on its head for impact development. We need to create a parallel structure on how we build community that’s collaborative rather than competitive.”

Heller posits, “What if we got a whole bunch of partners and funders around the table who could collaboratively make decisions together and find a way to empower these projects in a way they’re not now, so they’re not spinning their wheels and spending resources they don’t have to build projects that society should be supporting?”

ACT’s mission is to act as that go-between, working with the people with resources to help them deploy those resources in more responsible ways.

“We have these great tools for investing money into low-income neighborhoods – New Markets Tax Credits, the Community Reinvestment Act – and these programs are great, but they are uncoordinated. Sometimes they directly conflict with each other. You run into federal subsidies that are difficult if not impossible to layer with each other. You want all of these public programs and private dollars to work together, but you also have the philanthropic community.”

Without that philanthropic support, he says, putting together funding for these projects becomes almost impossible.

“If grants aren’t available then nonprofits have to finance with debt. That puts them in serious jeopardy if they can’t service their debt on the back end,” Heller explains. “So the question becomes, how can all these different sectors get together and collaborate around creative financing strategies and layered capital approaches? We need to bring the public, private, and philanthropic sectors together to talk about what kind of layered tools we need to create complex, layered capital approaches.”

ACT has a staff of community development professionals conducting market studies, working with existing place-based organizations to analyze what has been done and where the gaps are in terms of evaluating the impact of investment. “We really believe in the value of qualitative information gathering,” Heller says. “We conduct focus groups and interviews to assess whether this money is really going to the right things.”

This is, he says, the “non-financial return on investment” – how to quantify community outcomes.

“The big catch phrase is ‘impact development.’ We’re building things on the ground but how do you make sure those projects are impactful for the community in which they’re located, that it’s not just a building but that it’s delivering value for the residents that are there?” he asks.

If, for example, a project creates 300 jobs but they all require a higher level of education than that of the community in which it’s located, how is it having an impact versus building workforce training and credentialing programs to give the community access to those jobs?

Heller references the “top-down” planning approaches of the urban renewal efforts of the previous century, which often targeted and displaced the most disadvantaged sectors of the community.

“Since that time we’ve had this understanding that the top-down approach isn’t the right one, but we still see cities and states taking that approach instead of building community capacity,” he says. “It seems to me if we really want to really rebuild a severely divested community, the first thing to do is invest in the neighborhood social infrastructure so the people and organizations already there can take the lead in figuring out what the community wants and how to get it there. Otherwise we’re making the same mistakes that were made during urban renewal.”

Heller reflects that community organizations tend to excel at small-scale interventions and tactical urbanism, often in response to how few resources those communities actually have – lacking tens of millions of dollars to invest in large-scale development, they instead focus on building playgrounds or turning vacant lots into community gardens. These small-scale interventions without question provide real, meaningful value to the community, but, Heller states, “The greater problem is that we as a society have not tried to find major ways to empower communities to make these major investments themselves.

‘The solution to so many problems is investing in and empowering disenfranchised communities and aligning them with major resources so they have the ability to really shape their communities in high-impact ways. There are real resources out there and these communities need ways to align these resources in a more coordinated approach.”