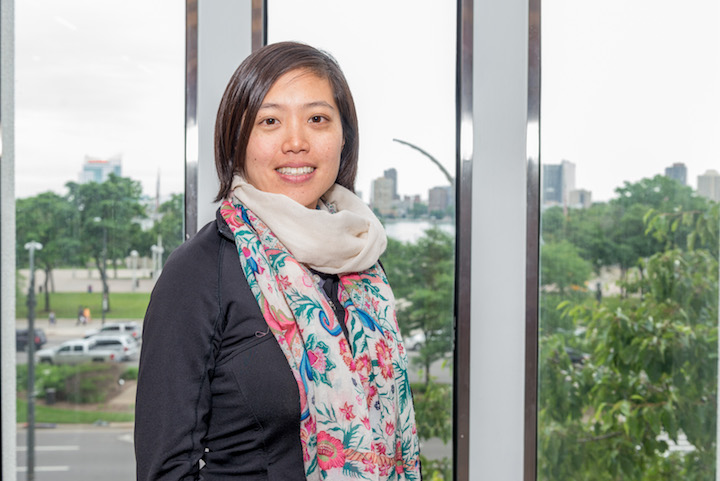 In the aftermath of Hurricane Katrina, many New Orleans residents felt the need to get involved, to do something, anything, to help their devastated community recover. It was a DIY effort in the most absolute sense – where government services failed or just simply didn’t exist, everyday citizens and volunteers from near and far led recovery efforts.

It was an energy that was inspiring, and one that Andrea Chen, Executive Director of Propeller, and her friends didn’t want to see disappear.

Chen moved to New Orleans in 2004, just one year before Katrina, to be a high school English teacher. After the storm, she and a group of friends were inspired by the grassroots movement of people taking matters into their own hands to work towards solutions in a seemingly impossible situation, so they revived the volunteer-run group Social Entrepreneurs of New Orleans.

“People who had no background in philanthropy or nonprofits were taking things into their own hands and starting to fix a lot of the issues,” Chen recalls. “Teachers, stay-at-home moms, real estate agents – they were all starting initiatives because a lot of the services were not back yet. We didn’t even have street signs. People were gutting houses and neutral grounds. People were getting together not as legal entities, but they started doing stuff anyway. We wanted to make sure that momentum carried on three, five, ten years after the government funding, media attention, and outside volunteers went away.”

Social Entrepreneurs of New Orleans re-formed in 2006 and formally incorporated as a nonprofit in 2009. They started a live business pitch competition, PitchNOLA, to get a sense of how many social entrepreneurs were out there. In 2011, the organization re-branded as Propeller.

The mission of Propeller is to drive impact in food security, water management, healthcare, and education equity by incubating and accelerating entrepreneurs who are tackling these issues from different angles. These four sectors were selected because the social and environmental challenges presented in those areas can potentially be solved with an entrepreneurial approach.

Propeller leads sector research and analysis to find out what the entrepreneurship opportunities are in each of those sectors, and then builds a pipeline with pitch competitions and convening people through workshops and other events.

They host PitchNOLA to get to know the entrepreneurs and stakeholders in each target sector. They host four of these competitions per year, one in each sector, which draw in more than 200 community members with their own solutions to the city’s most pressing social and environmental challenges.

In addition to PitchNOLA, the core program of Propeller is their Impact Accelerator, a three-month intensive growth track accelerator program for each target sector, designed for high-potential entrepreneurs and growth-track companies that are still startups but find themselves at a strategic point of growth, ready to scale up.

Many of their accelerates come from PitchNOLA, but they also do a lot of work to recruit, partnering with other leading organizations in each sector and getting to know the people in those sectors through workshops and other events, like their Water Challenge series.

“When we first started, we were concerned that the spirit of people starting companies and initiatives would die down after a few years,” Chen says. “We’ve actually found the opposite to be true. Every year more and more people apply for the pitches, the accelerator program, and office space. Demand keeps growing year by year. Social entrepreneurship is thriving, not dying. We have been able to make a significant change in each sector.”

Their impact has, in fact, been enormous. Since 2011, Propeller has launched 90 ventures through its accelerator, creating 130 new jobs in New Orleans and generating $36 million in external financing and revenue, plus an additional $80,000 is seed funding awarded to early-stage startups in the PitchNOLA competitions.

Propeller-supported innovators have seen 43 percent of New Orleans public school children now receiving healthy meals in schools; piloted an innovative research methodology, now the largest study of its kind of in the country, to track plate waste in school cafeterias and the factors that contribute to it; saved 1.5 million gallons of storm water runoff from the water system to prevent urban flooding; secured over $1 million in financial support and medical care for New Orleans children with disabilities; and secured health screenings for over 6,000 elementary students – and that’s just scratching the surface.

Propeller also runs a 10,000-square-foot co-working and business incubator space providing affordable workspace to over 70 companies, with about 130 people coming in daily.

In contrast to many other incubator and accelerator programs around the country, Propeller doesn’t subscribe to the idea that “new is always better” or that only tech companies are “innovative.” For Propeller, with a mission rooted more firmly in social justice than strictly economic development, working to drive social, environmental, and economic impact in New Orleans doesn’t mean constantly reinventing the wheel.

“We don’t care if your idea is the newest, first idea that no one ever saw before,” says Chen. “We’re looking at companies that are effective at solving missions. If you can replicate something that works, why not? If that is the most efficient or effective way of doing it, why not? I don’t even know what ‘innovation’ means. Some people would define it as tech-based, or new, bold ideas, but sometimes a new idea isn’t always the best idea. We’re more interested in the best ideas, which aren’t always the new ideas.”