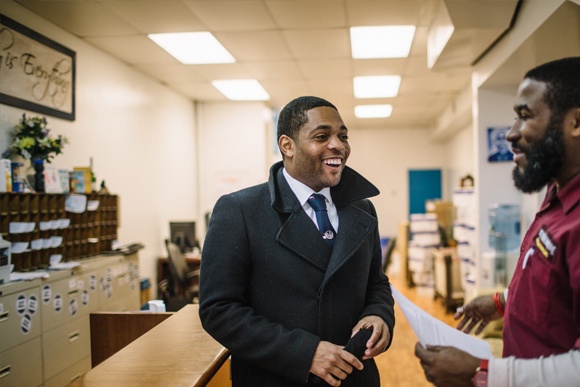 Current dialogue in economic development refers to the differences between “doing to,” “doing for,” and “doing with.” Historically, the technocratic approach has dominated development thought, a decades-long insistence that development problems are merely technical problems with technical solutions, and are the purview of the “experts” and not the people.

“Things are more likely to be sustainable if you’re doing them with people rather than to or for people,” says Akeem Dixon, 52nd Street Corridor Manager for Philadelphia’s Enterprise Center.

The Enterprise Center’s overarching mission is to cultivate and invest in minority entrepreneurs; catalyze benefits for businesses and residents that spark community revitalization in distressed, low-income neighborhoods; and provide debt and equity capital that businesses need to start, grow, and succeed. It has been serving West Philadelphia since 1989.

Dixon’s position is, on paper, a community and economic development one. But really, Dixon’s job is people.

Born and raised in Philadelphia with a strong sense of Philly pride, Dixon’s background is in branding and advertising, having managed clients that include Thomas Jefferson University, Blue Cross, and Comcast. The transition into community development was not a stretch at all, he says.

As the 52nd Street Corridor Manager, Dixon works with over 200 businesses and more than 30 street vendors in his commercial corridor, in conjunction with the Philadelphia Department of Commerce and Philadelphia LISC (Local Initiatives Support Corporation).

Dixon’s role is to help the businesses in this corridor grow with a diverse group of merchants from all over the world. “There are various groups of nationalities and people who have been here 20 and 30 years,” he says. “My job is to be the liaison between these businesses and the Department of Commerce programs and other technical assistance programs the city has to offer.”

The 52nd Street Commercial Corridor, also known as West Philly’s Main Street, is, like so many once-struggling neighborhoods in so many other cities, undergoing a period of revitalization. But in so many neighborhoods, revitalization is problematic – leading inevitably, it seems, to gentrification and related issues of equitable development.

In West Philadelphia, the approach is a bit different, attempting to harness all the positives while mitigating all the negatives of revitalization.

“The good thing about West Philadelphia is that there is some unity as to how people are working together,” says Dixon. “We have so many institutions working with the businesses and residents. West Philly has the same kind of things happening as in other cities, but in our case people are working together with the development partners, other nonprofit stakeholders, community residents, the police department, nearby universities – they’re all there at monthly meetings designed to bring people together.”

In the two years since Dixon has been at the Enterprise Center, he has seen people from various positions within the community become very excited and willing to work together.

“Once the foundation was laid and people saw the Enterprise Center was here to assist them, to help point them in the right direction, and that they were going to be a part of it, that the changes they wanted would be implemented with everyone working together, that’s the one thing I’m most excited about: the goal is for people to feel pride in the fact that they are a part of this, they are at the heart of this process, and they can start to create their own legacy.

Issues that have been brought up by community members and addressed by the Enterprise Center and its partners include safety concerns, corridor cleanup, greening the streetscape, and other beautification and community-led improvements.

“Every year gets better because of the consistency and transparency of all the parties working together,” says Dixon. “Councilwoman Blackwell has also been supportive of all these endeavors, showing we’re really here for the long haul to help inspire and educate people to become more self-sufficient and to have thriving businesses.”

Dixon remembers the first community meeting he held: only one person showed up, and it was his cleaning guy. Now every fourth Tuesday between 30 and 40 people come out, and those who can’t make it call him afterwards.

“My favorite asset is talking,” Dixon days. “By talking you can address issues and know what people are concerned about, then help them by simply placing them with people who can help them, who are dying to help them.”

It’s not that the assets and resources aren’t there, he says, but if a person doesn’t know about them they can’t take advantage of them. Talking to those people is the only way to know what their needs are and how they can be helped.

“In a lot of instances the issues for them isn’t money, it’s things like bookkeeping, accounting, maintaining inventory, having better displays in their windows. It’s great to see the light bulb go off from them talking. They see for themselves what their issues are, then we’re literally just plugging them into a service and checking in from there.”

In the coming months the Enterprise Center will introduce a new, larger loan program from a revolving loan fund that will enable Dixon, his colleagues, and his community development peers to do even more for local businesses. But any measure of success they’ve had so far, he emphasizes, can be attributed fully to the level of collaboration and getting everyone in the community involved in the process, all doing with.

“The success we’ve had in the last two years on 52nd Street is a direct result of all the different community associations and the councilwoman’s office and LISC and the police department and community residents all working together,” he says. “The conversations aren’t always warm and fuzzy. You do experience setbacks. You don’t always get grants. But the partners understand that it’s all about them and the success is all about the work they’ve put in. That is the idea of community development to me – this is real community; we have to work together.”