“The future is here—it’s just not very evenly distributed.”

I’m reflecting on Gibson’s insight from our CouchSurfing host’s apartment in Butterworth, Malaysia. The location doesn’t matter; it could just as easily be an Internet kiosk in Vietnam, a bustling mall in Singapore, or a trendy café in Cambodia. Gibson feels right as a starting point for discussing urban chaos, a quality his gritty technological futures have in spades.

In 2003, less than 4% of Vietnam’s population had access to the Internet; today, over a third have access.The numbers have become familiar clichés. Six billion mobile devices in every corner of the world, a quarter of them smartphones. Facebook announced one billion users a while back, most of them outside the US; even in Vietnam, where it’s nominally blocked, over 20% of those with Internet access have profiles. The ranks of the digerati continue to swell: the number of Cambodians with Internet access grows by 60% each year, even as many continue to live on $1/day.

These stats are impressive, but they don’t address a deeper question: what are the cultural and social effects of this explosion in connectivity? What does a future where you can organize thousands of protestors, teach 200 000 students, or evaporate $400 million at the tap of a screen look like when it *is* evenly distributed?

Earlier this year, Huyền Chip’s Xách Ba Lô Lên Và Đi (Pick up your backpack and go) hit Vietnamese bookshelves with the fascinating story of a girl who journeyed through Asia and Africa for two years on a budget of $700. Her book has piqued Vietnamese interest in CouchSurfing, a global network whose members, referred to as CouchSurfers, host each other for free. The logistics of hosting are handled through their website. Like parkour, Meetup, and the hackerspace movement, CouchSurfing is a globally local community, a chimera that combines local cultural immersion with a prevailing belief in the virtues of openness and reciprocity.

My wife and I stayed with three CouchSurfing hosts during our time in Vietnam: a university student in Cần Thơ, an ex-chemistry teacher turned PADI dive instructor in Đà Lạt, and a family in Cam Ranh. All three joined CouchSurfing after reading Huyền Chip’s book, but there’s another trend at work here. In 2003, less than 4% of Vietnam’s population had access to the Internet; today, over a third have access. Even smaller towns now have Internet cafés, often little more than gutted storefronts packed with computer terminals. Among students, Facebook and cellphone usage is ubiquitous.

To older generations that weathered civil strife and French colonial rule, the generation gap is massive. One southern Vietnamese man expressed his concerns: if the youth content themselves with cellphones and Facebook, who will confront political oppression? In a country where dissident bloggers are routinely jailed, these concerns are far from idle. There are rifts of tradition as well. As Huyền Chip notes on her blog, her travels conflict with a culture where women are expected to be marriageable housewives, not freewheeling adventurers. 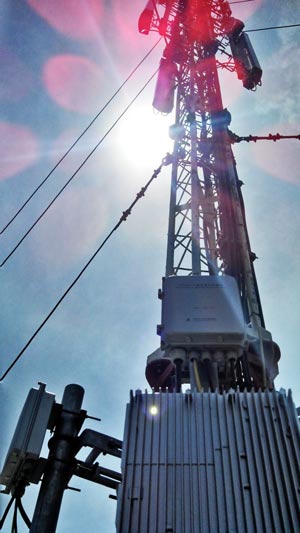 The family that hosted us in Cam Ranh, Vietnam rent the roof of their house to a local telecom; this tower covers much of the downtown area.

Yet there is hope: if technology can disengage, it can also engage. As CouchSurfing was taking off in Vietnam, members of Malaysian activist coalition Bersih organized Bersih 3.0, their third round of simultaneous global protests against electoral corruption. With an estimated 300 000 protestors in Kuala Lumpur, and satellite demonstrations as far afield as Cape Town, the movement has tapped into the same worldwide political awareness that brought the Arab Spring and Occupy movements into the media spotlight. To do so, it relies upon an increasingly rich social media infrastructure. Facebook and Twitter play their role, but so do other giants: poignant images surface on Pinterest, videos on YouTube. Chinese social messaging service WeChat has made inroads with its Malay portals. The Bersih site doubles as news ticker, donations centre, and soapbox.

Looking at the map of Bersih 3.0 protests, though, they’re all in major cities. This begs the question: is the spread of technology erasing the digital divide, or just moving it around? It’s a valid question, one whose implications are especially apparent in the education world. When Google engineer Neil Fraser visited Vietnamese schools earlier this year, he was extremely impressed with the quality of computer science education. The secondary school students we spoke to gave a different account of their computer training, which was limited to some basic Excel and Word exercises in Grade 9. This push to improve computer science education is extremely recent, and it’s far from evenly distributed: most rural schools in Vietnam still lack computers. Where educational technology is concerned, the generation gap strikes early.

Organizations like Teach for America step into this fray, helping lower-performing school districts to provide a quality education for their students. Building off the success of its American counterpart, Teach for Malaysia was founded three years ago. Our CouchSurfing host in Penang manages several Teach for Malaysia fellows in Central Malaysia, one of whom we visited at a school in the neighboring province of Perak. Compared to their well-stocked library, the computer lab at the school is little more than an appendix. There are eight workstations for 1500 students, several without a functioning mouse. The tables are covered with leaflets entitled “20 Tips and Tricks for using Facebook”, while nearby shelves are lined with courseware that rarely gets used. When we visited, the area was being used mostly as an offline study room. As in many areas of the developing world, schools here remain awkwardly perched on the digital divide, even as their students leap across it.

The rapid growth of online education makes this a critical issue. Proponents argue that MOOC platforms like Coursera and edX democratize university education. Critics fear that they widen the gap between digital haves and have-nots by turning Internet access into a prerequisite for learning. Both sides may be right. Since edX launched its first course in early 2012, the platform has grown quickly to include content from a worldwide consortium of universities. All but one of its Asian members are in cities with more than 5 million inhabitants. (The remaining one is in Kyoto, hardly a rural backwater.) In the process, edX’s popularity has brought world-class content to a worldwide student body that extends far beyond the walls of those institutional members. 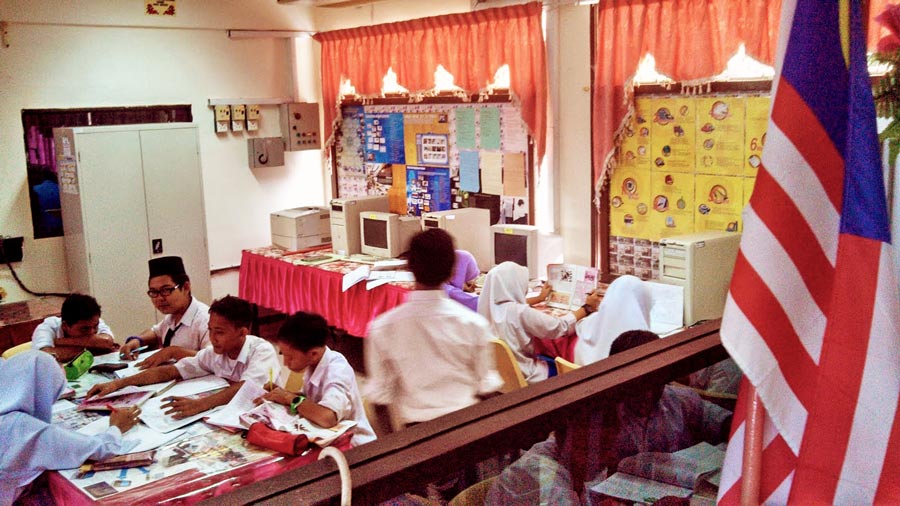 Computer lab in the school we visited in Perak, Malaysia.

Back in Cần Thơ, our host’s band played sets in upscale cafés around town, reading lyrics off an iPhone as they alternated between traditional Vietnamese ballads and hit singles by Adele and Lady Gaga. With more than 1.7 billion views, Psy’s runaway YouTube hit Gangnam Style has brought Korean pop to a truly global audience. Hong Kong cinema is sweeping box offices across America, aided by precisely targeted social media campaigns. Technology isn’t Westernizing the world, far from it; it’s creating a new culture, one powerfully aware of its global nature yet rooted in countless localities.

The operative word here is **creating**. This new culture is still evolving, right from the most basic social questions: what does privacy mean? Freedom of speech? Ownership of content? So far, many of these questions have assumed Western cultural values, but not for much longer; the rest of the world is joining the fray, and quickly. Public toilets in Singapore now come equipped with screens at the exits that ask users for feedback on cleanliness. Under Korean law, minors are prohibited from playing online games past midnight on schooldays. Computerized displays in the Islamic Art Museum in Kuala Lumpur show prayer times across the world. As part of their efforts to break into the Japanese market, Facebook has Japan-only support for specifying blood type.

What all of this will mean for our urban future is unclear, but one thing is certain: as connectivity becomes more and more evenly distributed, so will the change it brings.