Sustainable Olympics in Sochi: A Challenge of Olympic Proportions

Photo credit (above): The Nation

In 1996, the International Olympic Committee (IOC) declared environmental protection as the third pillar of the Olympic Games. Since then, environmental sustainability has been successfully integrated into the construction and operations of the Games. Part of this success was due to the political, economic and cultural context of the locations of proceeding Olympics. For example, Vancouver set a sustainability gold standard in 2010, initiating the first carbon-neutral Games target and issuing a comprehensive sustainability report, complete with a scorecard. The London Olympics followed suite in 2012, diverting 90% of construction waste from landfill and creating about 620 acres of new wildlife habitat in conjunction with stadium construction. This year, however, sustainability efforts in Sochi have proven more challenging.

The 2014 Sochi Olympics are the most expensive in history, coming in over $51 billion, with all venues and infrastructure built from scratch. Russia’s bid for the 2014 Olympics included promises of Zero Waste Games and green building practices, presenting a large opportunity for sustainable development. At the outset, the Sochi Organizing Committee partnered with the United Nations Environment Program (UNEP), Russian Greanpeace, and Russian WWF. Overtime however, the partnerships unraveled, as planning and construction did not follow through on previous commitments made.

Putin pushed to have the Sochi region host the 2014 Olympics, with visions of turning the region into a global sporting hub. This region is also home to a UNESCO world heritage site that houses Sochi National Park. UNESCO inducted the Western Caucasus mountain region as a world heritage site in 1999 because of its “remarkable diversity of geology, ecosystems, and species,” and because it was one of two mountain ranges in Europe “that has not experienced significant human impact.” 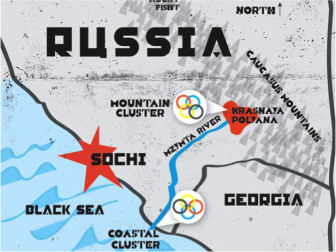 On Friday, February 7th, however, 40,000 people sat in Sochi’s Fisht Olympic Stadium, excitedly watching the opening ceremony. The region will no longer exactly be isolated from human impact. According to Time Magazine, during the planning phase, the International Olympic Committee (IOC) and the United Nations Environmental Program (UNEP) relocated some of the Olympic Venues away from the border of the UNESCO site. Regardless, a highway and train tracks have been built through Sochi National Park to provide transportation between the two clusters of arenas.

Local environmental organizations also raised concern about the environmental impact of construction practices. A member of NGO Environmental Watch of the North Caucasus (EWNC) was quoted by Time saying, “Parts of the national park have been completely destroyed. This area was the most diverse in terms of plant and animal life in Russia.” Russian Greenpeace found that during Olympic venue construction, parts of Sochi National Park became landfill. The Russian Geographical Society (RGS) tried to organize press conferences and public hearings on the shrinking wetland and privatization of public beaches, but were blocked by government construction firm, Olympstroy, Outside Magazine reports. 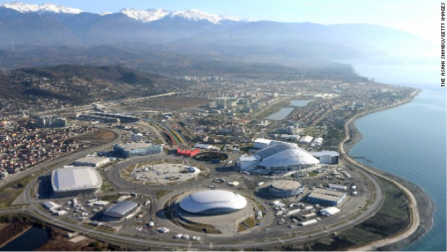 Although the Russian Government failed to meet its environmental commitments for Sochi 2014, commitments from private partners are proving to have a more positive impact on the sustainability of this year’s Olympics.

2014 marks the first carbon neutral Olympic Games. As the official Carbon Partner of the 2014 Olympics, Dow Chemicals has committed to offsetting 520,000 metric tons of carbon. This covers 360,000 MT for activities of the Organizing Committee, including the travel and accommodation for athletes, staff, volunteers, etc. and the operations of the venues. It also covers160,000 MT for travel and accommodation of spectators and media.

Dow’s offsets for the Games include the implementation of energy efficiency technology in Russia, which has been in the works since March 2013. Also, Dow is creating offset projects in Brazil and South Korea, the locations of the next two Olympics.

Even with environmental concerns aired, construction for Sochi 2014 marched along. What was once a region of pristine biodiversity now hosts the most extravagant Olympic venue to date. In the future, the region will be a global ski destination and home to large-scale sporting events. 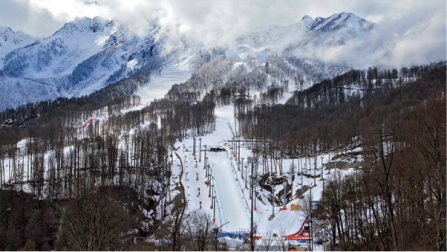 The press blamed the Russian government for not living up to sustainability promises. However, the IOC failed to follow through on its role, “to encourage and support a responsible concern for environmental issues, to promote sustainable development in sport and to require that the Olympic Games are held accordingly,” as listed in the IOC’s charter.

Looking at the environmental impact from Sochi, it seems the induction of environmental protection as the third pillar of the Olympic Games is a trendy green veneer. Hopefully, the lack of sustainable development demonstrated in Sochi will not be a legacy for future Games.