The phrase “stakeholder engagement” does not exist in Spanish. And yet, in January of 2014, a group of 12 MBA and MPA students from Presidio Graduate School, myself being one of them, traveled to Santiago for a stakeholder engagement project, focusing on Chile’s energy future.

Chile is one of the strongest economies in South America and has experienced rapid economic development. Radical economic reform in the 1970s gave rise to neoliberal economics. Largely influenced by Milton Friedman and the Chicago School of Economics, Chile transformed into a privatized, deregulated economy. While the economy has boomed, short-term growth is matched by long-term challenges — especially in the energy sector.

Currently, most of Chile’s energy comes from imported fossil fuels. In 2004 when Argentina began cutting oil exports to Chile, prices skyrocketed. This event has left a visceral imprint on the Chilean psyche, and the country is looking for a more secure energy future.

However, due to rapid economic development, Chile’s growth is outpacing its ability to supply energy. This set the stage to tap into the country’s natural resources as a source of energy. In 2011, the HidroAysen megaproject was approved, an enormous endeavor to build 5 hydroelectric power plants across 2 rivers in the south of Chile. The impacts of the HidroAysen on Chile’s pristine environment would be irreversible, flooding an estimated 14,500 acres of natural reserves, requiring the relocation of certain indigenous communities, and the building of transmission lines from Aysen to Santiago. Protests for the project were widespread and with the HidroAysan held up in courts, key investors began to pull out. With this backdrop, the Presidio Team set out to understand what a sustainable, secure energy future might look like for Chile. 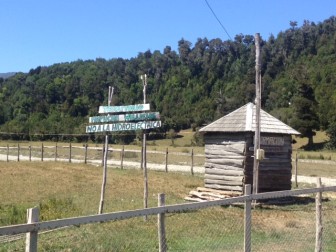 Presidios’ International Sustainability Club laid the groundwork for the project in the six months prior to the trip. Research was conducted on Chilean energy markets, energy policy, and Chilean culture. All team members tapped their networks to identify contacts in Santiago. Ultimately, research on stakeholder groups was split into five categories: government, energy producers, energy users, affected local communities, and advocates. On January 4th, we commenced a series of targeted interviews over the course of two weeks. By luck, preparedness, or charm, we managed to conduct over 25 interviews across all 5 stakeholder groups in 10 days time. 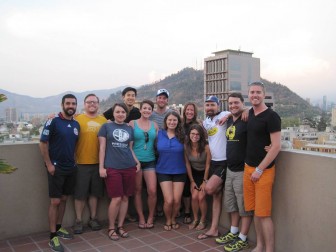 Preparing for the project, we recognized that going into a foreign country with a foreign energy market and a foreign language (Chilean Spanish is infamous for being difficult to understand) there was a lot we didn’t know. Our goal was simply to listen and aggregate as many stakeholder perspectives as possible. What we did know was that our Presidio MBA training, focused on public-private partnerships, systems thinking, and triple bottom line accounting, created an opportunity for us to provide a fresh perspective.

There were three main factors that enabled us to smoothly carry out this seemingly ambitious project. First, Chilean government officials were willing to meet with us and connect us with professionals within their network. By the time we were ready to leave Chile, we had a large number of warm introductions into the Chilean energy industry. Second, was the openness of Chilean culture. Most interviewees came by harsh or blunt opinions openly and honestly, making our job at gathering information much easier. And thirdly, is the fact that currently, stakeholders are not integrated into Chile’s decision-making process. This has created a strain that is felt both by the government and by citizens. In fact, many protests to the HidroAysen project were critiques of lack of transparency in the decision making process. Without including stakeholder opinions, decisions are top-down and not well received by the public. Because of this context, we realized that our work to bring stakeholder voices into the conversation on national energy was quite valuable.

Indigenous communities make up 4.6% of Chile’s population, 85% of whom are from the Mapuche tribe and predominantly live in rural Southern Chile. In an attempt to understand the Mapuche communities’ priorities around energy, I traveled with some of my colleagues south to the town of Osorno. There we met with the director of an ecotourism company, Mawidan, who works closely with Mapuche communities. We also met the head of communications for the Mapu Lahual Indigenous Association in the town of Puaucho. Luckily, we had arrived just in time to learn about a brand new solar energy project being piloted in the region. 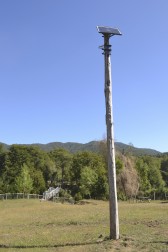 Most rural communities have gas-powered electricity but because prices are so high, they rarely use it. To solve for this, the rural municipal office in Puaucho proposed setting up distributed solar energy. An impact study conducted by Andes Mainstream SPA showed that indigenous communities are receptive to renewable energy projects that have little environmental impact. Since solar installations are minimally invasive compared to hydro, wind, or geothermal, the Puaucho municipal office proposed it as a viable renewable option. The project enables farmers to purchase and install solar panels that are 80% funded by the government and 20% funded by the farmer, providing affordable electricity. So far, there are about 40 solar projects going on in the Lakes District, all of which were installed in 2013.

Chile’s top priority is to continue its path of economic development, which requires cheap energy. A Renewable Portfolio Standard Law was passed in 2013, requiring 10% of energy sold to come from renewable sources by 2024. However, the mindset of most stakeholders we talked to is that cheap energy is the priority, regardless of where it comes from. Chile is plotting along under neoliberal economic practices, with engineers and economists being the chief decision makers. But in order to realize sustainable development along with economic growth, the country needs to integrate the priorities of all stakeholders into its strategy for a secure energy future.