Lynn Heller is the CEO at the Climate Access Fund.

Across the country, the economic benefits of residential solar power have for the most part been available only to those who own their own homes and can afford the upfront costs of rooftop solar. 38% of households in the City of Baltimore qualify as low-income, 60% of whom are renters and thus by definition have been unable to benefit from residential rooftop solar.

This emerging pattern of inequitable access to solar must be addressed as we transition to a clean energy economy. It needs to be addressed both because it is the right thing to do, and because low-income households make up 14% of the electricity market in Maryland and generate substantial greenhouse gas emissions.  If fully served by solar energy, the low-income residential electricity market would reduce CO2 emissions by about four million metric tons, roughly 10% of the state of Maryland’s goal for 2030 GHG emission reductions.

In 2015, the Maryland General Assembly took action to remove this key barrier to low-income solar access. The General Assembly passed a law allowing households remote access to solar power: any Maryland resident, whether they own their own home or not, can sign up for solar power that is generated elsewhere in the same utility service territory and get credit on their electricity bill for that power. The Maryland Public Service Commission subsequently issued the Maryland Community Solar Pilot Program regulation in 2016. 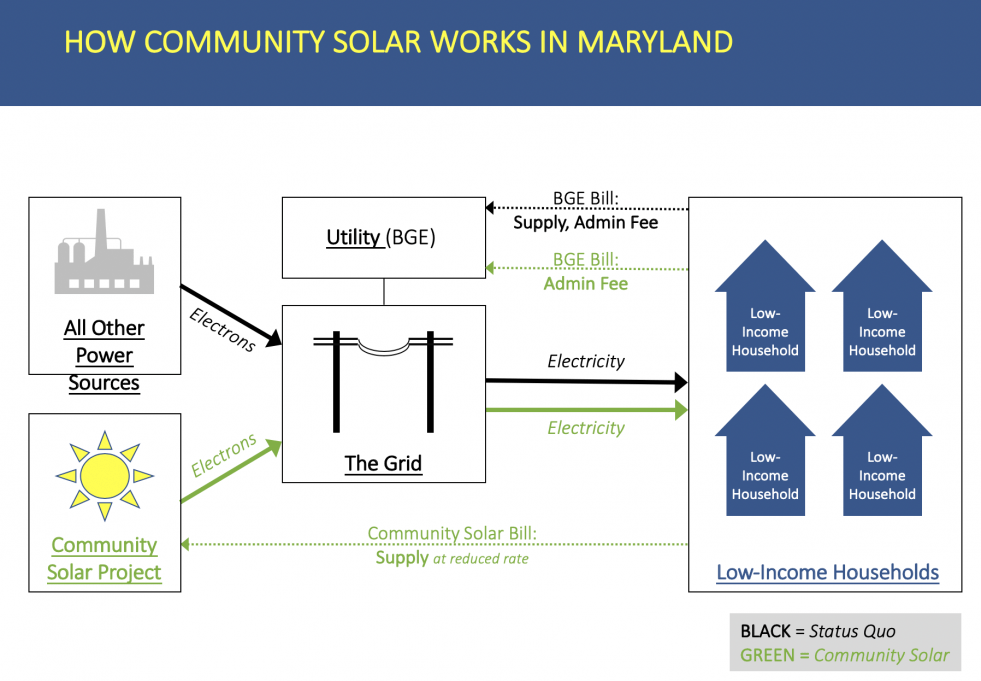 The Maryland Community Solar Pilot Program requires that at least 30% of the program’s solar capacity be reserved for projects that serve low- and moderate- income (LMI) customers. Yet the regulation does not include any financial incentives for solar developers to serve LMI subscribers, and traditional developers and their investors tend to be hesitant to enter the low-income community solar market because they are concerned that low-income customers may not pay their bills.

The Baltimore-based Climate Access Fund (CAF), a nonprofit Green Bank, was launched in 2017 to address this gap between the community solar regulation and the way the solar market has traditionally worked. CAF provides a one-stop shop for low-income community solar, working to attract solar developers to the nascent market.  CAF offers solar developers: 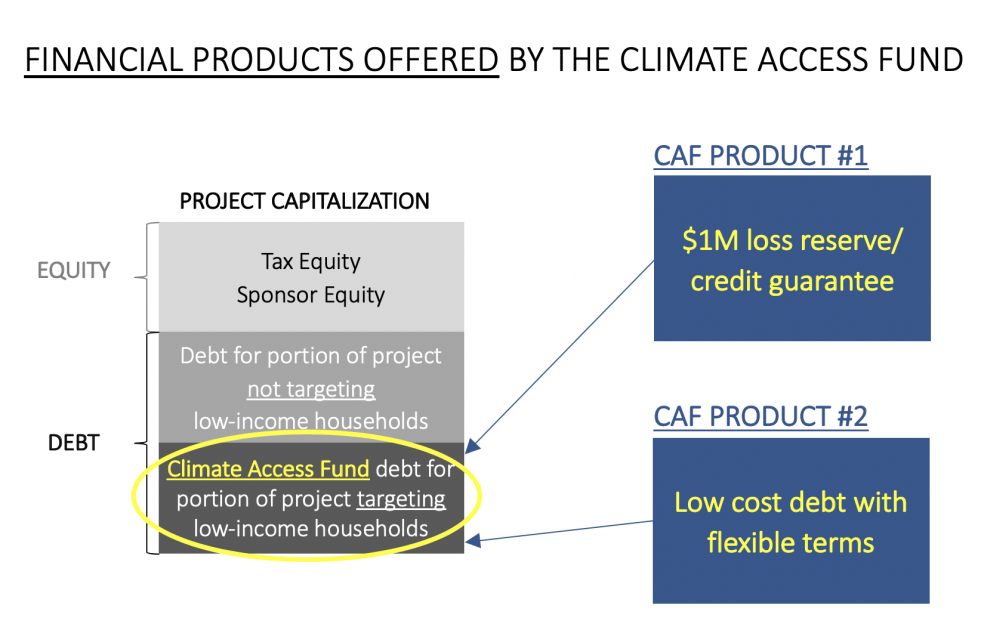 In exchange for these services, solar developers must agree to an initial 20% discount on low-income subscribers’ electricity bills, with no credit limitations or lengthy contract requirements.

CAF expects to close on its first project in the coming months, and has a pipeline of additional potential projects in the queue. CAF’s short-term goal is to maximize the number of low-income subscribers who can benefit from its community solar projects over the next four years (the remaining term of the Community Solar Pilot Program), thereby strengthening the case that the Program should be made permanent. CAF’s longer-term goal is to collect low-income bill payment data in order to demonstrate to the private market that traditional credit scores are not necessarily the best metric for electricity bill payment. CAF anticipates that its projects, owned by solar developers and their tax equity partners, will be refinanceable at market rates at the end of CAF’s seven year loan terms. CAF can then use its flexible capital to help kick-start another emerging clean energy market for low-income benefit.

By demonstrating that affordable community solar power can be successfully financed and deployed in underserved communities, CAF aims to help bring the market to scale in Baltimore and throughout Maryland.

CAF was created in partnership with the Coalition for Green Capital (CGC), and builds on the Green Bank model that CGC has developed and implemented. “Green Bank” is an umbrella term for financial institutions that seek to reduce greenhouse gas emissions while also reducing consumer energy costs. Green Banks achieve this by investing a dedicated pool of capital in ways that mobilize additional private investment.

In CAF’s case, we created a plan to establish a non-profit green bank that, instead of relying solely on public funds, would raise mission-driven dollars from multiple sources. By establishing a new Green Bank without direct government assistance, CAF takes a new and innovative approach towards the Green Bank model.

The proven track record established by US Green Banks is growing. Fourteen Green Bank institutions exist across the country, although they use varying names to describe their activities.  Together they have mobilized almost $3.7 billion in investment into projects including clean energy and energy efficiency. 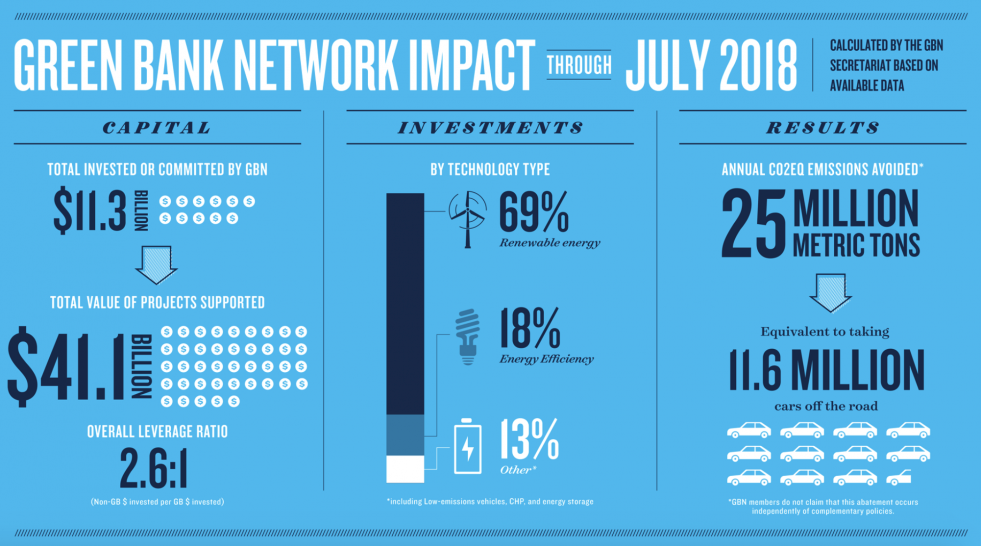 CAF is a key player in this broader movement, developing frameworks to bring affordable and accessible clean energy to the widest possible audience.