Daniel Obodovski is currently finishing work on a book co-written with Daniel Kellmereit of Detecon USA called “The Silent Intelligence” – The Internet of Things. Previously, Daniel was Director of Business Development at Qualcomm, where he led commercial launch of multiple M2M products and businesses. In 2011 he co-founded, and currently co-chairs, M2M SIG at CommNexus San Diego.

I was recently asked, “What makes you excited about the Internet of Things?”

Some analysts predict that the IOT will grow to 50 billion devices by 2020. In GE’s recent study, Industrial Internet, it forecasts that the Internet of Things will generate trillions of dollars in productivity savings.

I don’t know about you, but it is not the numbers that get me excited. For one thing, there is a high probability that these numbers will prove to be wrong. They are either going to be too high or too low compared to what will actually happen in reality. If we look at similar predictions about the future of technology from the past – the numbers will most likely be too conservative. Most technology growth forecasts prove to be too optimistic in the short-term and too conservative in the long term.

In the meantime, as the technology community is wondering which year is going to be the breakthrough for the Internet of Things, a lot is already happening quietly in the background. Here are just a few examples of the explosion of the IOT economy or Smart Cities:

And they are all affecting the way we live in our cities today.

Last, but not least, there is Smart Trash – or the monitoring of the “removal chain” in Smart Cities. That’s what I want to talk about today.

Several years ago, I was working on a dedicated GPS-tracking product at Qualcomm. The team was getting close to the commercial launch when somebody approached me and told me about a project the MIT SenseableCity Lab was working on. It was about tracking trash and I was asked if we were interested in supporting it.

My initial reaction was: “Of course not. First, we are extremely busy getting ready for a commercial launch and second, who on earth wants to track trash?” Yet, I met with the MIT team and that meeting changed my perception of what technology can do for our environment.

“Are you aware what a big deal supply chain management is and how much money is spent annually on its optimization?” one of the project leaders asked.

I responded that, even though I did not know the exact amount, my assumption was that it was rather substantial.

“That’s right,” – continued my counterpart – “now imagine the removal chain or what happens to things as they are being disposed. Do you think they just disappear?” I had no answer. “Don’t you want to know where the trash goes after it has been disposed and how much time it spends there or which routes it takes?”

Well, he definitely got my attention with that and the potential of this project quickly became clear to me.

As cities become larger and more populated and as the population becomes wealthier, our consumption grows dramatically as well – leading to disposal of more and more stuff. It takes more and more energy to deal with all the piles of garbage. As we increase the share of what can be recycled, understanding the efficiency of garbage removal and disposal becomes more and more critical.

And by garbage removal and disposal we not only mean the green garbage truck that drives around your neighborhood once a week and can be tracked by GPS, but also the individual pieces of waste – electronic, toxic, recyclable and non-recyclable items like old TVs, batteries, Styrofoam cups, plastic and many other things. What happens to them after they disappear in the belly of that garbage truck?

We  agreed to support the MIT project and as a result had the chance to work on one of the most exciting things in our life. We agreed to put several thousand tracking devices onto pieces of trash and track them in real time with cloud-based software.

The project also had a nice side-bonus for us. In lab tests, our tracking devices demonstrated several months of battery life but testing battery life live in the field was cumbersome, especially with so many devices. The TrashTrack project gave us that testing opportunity. I remember asking my MIT counterpart how much battery life he expected out of the devices. His answer was, “I don’t think that trash needs more than 2 months, but who knows.”

In reality, no one knew, because no one had ever before tried to track trash in real time. Imagine our surprise when 5 months after disposal some devices were still sending position reports.

As a matter of fact, we discovered that electronic waste travels all the way from Seattle to Florida to be disposed, just because Florida has state sponsored e-Waste facilities. That seems very counter-intuitive and inefficient.

We also found out that although 80% of trash disappeared in the landfill within the two weeks, 20% continued to move around for quite some time. Some went from Seattle to Chicago and then to the Mexican border to be disposed. 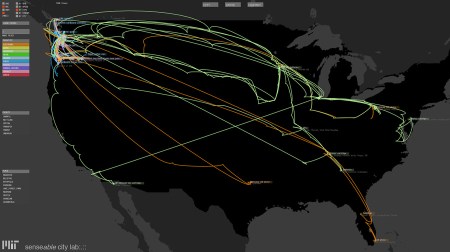 The MIT team built a powerful computer visualization demonstrating the paths that different types of garbage took across the country. The results were published in Science Magazine and received a prestigious National Science Foundation award in 2010. But most importantly, it drew the attention of millions to the issue of what is happening with our trash once it is out of sight and how to optimize its flow and to accommodate growing consumption.

For us, it also demonstrated the power of technology in solving everyday problems, removing guesswork and providing hard data one can make decisions on. It also opened the world of opportunities for creating smart devices – devices that sense their environment, act upon the information, and share their findings with the cloud and the public.

So, going back to my original question – what makes me excited about the Internet of Things? I would say it is the opportunity to change our lives for the better, to learn about our environment and ourselves and, finally, to take a peak into our future.