Alicia Asín is the CEO and co-founder of Libelium, the wireless sensor hardware provider, creators of Waspmote, a modular sensor platform for the Internet of Things (IoT). Alicia is a computer engineer focused on how the IoT can change our world, starting with Smart Cities and smart agriculture. She is a frequent speaker at international conferences on issues related to Smart Cities, wireless sensor networks, and the IoT.

Let’s imagine a modern city in 2020. It is a Smart City. Urban planning, ecology, and information technology reach into every neighborhood, to improve citizens’ quality of life.

Sensor-based systems are already in place in many municipalities and regions all over the world. Before long, smart cities everywhere will be generating tons of data to help us find a parking spot, to conserve water in parks, to monitor transport, crowds, and pollution levels, and to keep us safe. 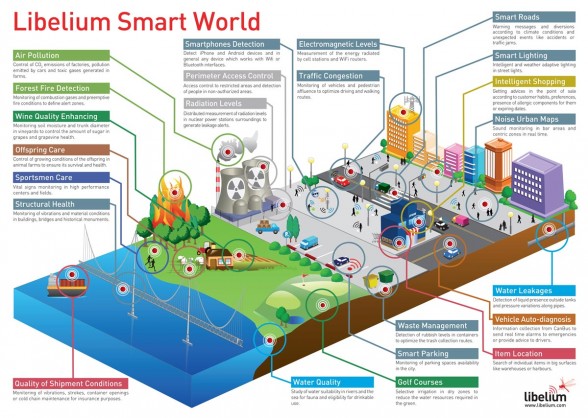 Of course, not every city has reached that point yet. From a practical, hardware-based point of view, I want to share how far we’ve come in cities from Hoboken to Gerona, from Malaga to Melbourne, from Salamanca to Sydney… but particularly in Europe where the Smart Cities movement has its roots.

A dream of efficiency

In the first wave of smart cities, starting around 2009, mayors and city managers were excited about adopting sensor technology. It was what they had been dreaming of to monitor air quality, traffic, noise. Sensors would help manage services, to improve, and modernize urban areas. Municipalities listened carefully to the many Smart City advantages, and cost reduction was a big driver. And so calls for bids were issued, and won. Contracts were signed, the first pilots and projects were launched, and then…reality set in.

Early on, the challenges came from understanding the limits of technology — sensor placement, over-the-air programming, how to deal with mobile and moving networks to track trams and buses, or the eternal trade-off between real-time data monitoring and power consumption.

The biggest challenges had nothing to do with technology. I remember when an elderly lady stopped to ask our engineers what all those black boxes on the streetlights were for, and if they were paid for with taxpayer money. Another time, a city employee actually came down to the street and blocked our installation because he thought it was unsafe. It turned out no one had told him what was going on. As engineers it took us a while to realize this was not a technical discussion, but a political one.

New devices are very visible in the urban landscape, and at the same time the population has never been so well informed. Citizens ask: “What are you doing with my taxes?” People wonder which services were dropped in favor of funding this shiny new project. And we found that you’d better have a good answer, or there will be a firestorm on the social networks, at great political cost.

Some resistance can be chalked up to NIMBY — “not in MY backyard.” But it’s not just citizens who worry. Mayors ask more questions because they are more informed. They are concerned with costs and funding, the ability to produce real, useful information and even how to get internal cooperation. 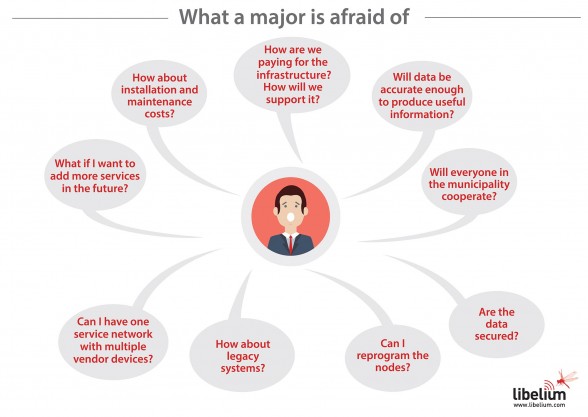 Early projects brought out the first signs of frustration because there were very few answers. And with that, the Smart Cities detractors started to criticize. This was not failure but a natural, necessary process of market education: a matter of aligning expectations that can only be set by understanding the context of those projects.

Smart Cities v. 1: Technology for its own sake

In the first wave of Smart Cities the goal was testing the technology — not building a business case. This is fine, but the message wasn’t always communicated properly. Add the fact that early Smart Cities projects were witnessed by city residents shaken by the greatest economic crisis of the new century, we can understand the great pressure on municipalities that led to a phase of “the more sensors, the better.” Political leaders were looking for the spectacular in terms of the number of sensors deployed, but without the proper budget for it.

That’s when we started to see to reports with a negative spin, such as “Smart City Santander: Proven Technology, Uncertain Business Models,” by Jennifer Belissant (Forrester Research).

Most of the early projects were funded by the European Union, and without any real continuity plan. As a benchmark, a telecom project allocates 15% to 20% of its total yearly budget for maintenance operations. In the early Smart City projects, this was not even contemplated.

In the first iteration of Smart Cities we discovered the technology boundaries, the importance of clarifying requirements, and aligning expectations.

First: We are a long way from commoditization.

As long as projects remain experimental and anchored at the pilot stage with dozens or a few hundred units, it won’t be possible to consider hardware as a commodity. I think the Internet of Things is like a new railway age — hardware is nothing but the tracks. First come the tracks, then come the services…

Services are multiple in a city. There is not just one vendor. With all the new radio and cloud technologies vying to be the single, “go-to” technology, interoperability is key. [That is why we designed Waspmote a sensor platform that connects +100 sensors to different cloud solutions using +20 communication protocols.]

We also found that:

In Smart Cities version 2.0, the citizens are driving this time. They demand quality-of-life indices. Lighting, Energy, Water, Transportation are crucial; air quality and noise pollution touch everyone acutely. Sustainability has moved to the forefront and so has the concept of urban resilience, the ability to recover quickly from risks stemming from climate change or other disasters, in our cities, and urbanized regions.

Actions initiated by citizens give rise to ad hoc, grass roots efforts, where citizens charge themselves with detecting risk. Smart Cities and the Internet of Things allow people to interact with their environment and the city and regional governments in new ways.

A case in point is detecting radiation in Fukushima.

Open data initiatives make municipal activities transparent. I think this is an important guarantee of democracy, and could be the greatest legacy of the IoT.