Schools Save Millions with Solar + Storage

Schools represent about one-third of all solar PV installed in the U.S. Clovis Unified School District in California funded 5.9 MW of solar in 19 locations with a bond measure. Clovis now saves about $2.7 million annually in lower utility bills. Today, schools can often install solar, storage, and other energy solutions without any capital expenditure (capex) and without bond measures. 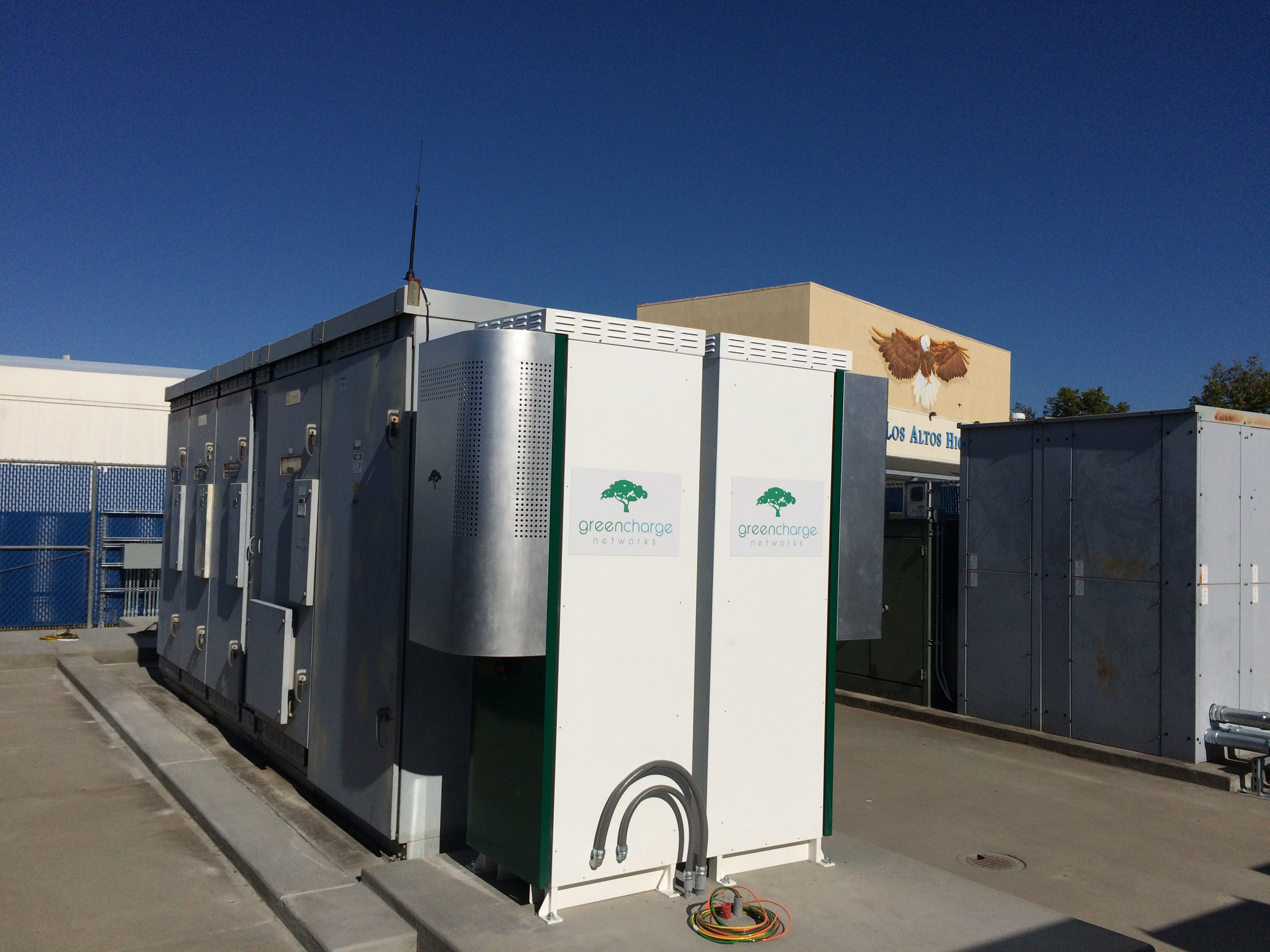 Schools are turning to solution providers like Green Charge, an Engie Company, to install large lithium batteries, power electronics, and use big data and machine learning to optimize battery use. I talked with Green Charge CEO, Vic Shao, about how they are helping schools cut energy costs, make best use of solar power, and make money from utility programs. Green Charge looks at a school’s energy use, and then proposes a Power Efficiency Agreement where batteries are installed and managed at zero cost to the school. A typical 10-year contract shares energy savings between the school and Green Charge in a win-win scenario.

Mountain View-Los Altos High School District (MVLA), in the heart of Silicon Valley, invested in energy efficiency and installed 1.26 MW of ground-mounted solar to meet half its energy needs. Yet even with efficiency and solar, utility bills eventually grew. Student population grew, buildings were added, and electric car charging installed. Utility bills soared when the school district exceeded their target peak demand for the month. Even minutes over peak can add thousands to the monthly utility bill. With batteries and advanced software, peak demand charges can often be avoided.

MVLA parents work at places like Tesla, Alphabet, and Oracle; it is no surprise that the district would not only use advanced batteries with its solar, but also would use intelligent storage management with big data and machine learning.

“Each year, we expect to reduce our demand charges by $86,000, if not more. Every dollar saved is a dollar we can spend in supporting greater educational opportunities,” stated Mike Mathiesen, Associate Superintendent, Business Services MVLA. There was no capital outlay in in this public-private partnership. Green Charge installed the advanced lithium batteries and cloud hosts the big data and machine learning for a monthly fee that is less than the energy saved.

Green Charge collects second-by-second energy-use data from all customers. It also subscribes to weather and solar forecasting data. With machine learning, Green Charge software gets continually smarter about forecasting the minute-by-minute energy use at a site and predicting solar generation. The software automates the charging and discharging of batteries, thereby avoiding peak demand charges.

From hurricanes to sub-zero storms, communities are looking to schools to serve as emergency shelters. In Florida, over 115 schools have installed solar with battery backup as part of the SunSmart E-Shelter Program, a program initially funded by the American Recovery and Reinvestment Act. With talk of new infrastructure programs, there could be new opportunities for schools.

After Superstorm Sandy, New York is interested in awarding several schools with funding for emergency shelter programs that use microgrids with storage.

School solar systems have also been incorporated into STEM learning programs. Teachers can use the open source EnergyWhiz curricula. In such a learning program, when the 10kW solar tracker array broke at Milford High School in Utah, the students engineered a solution that helped the professionals fix the system.

About 4,000 U.S. K-12 schools have solar systems totaling 490 MW, details Brighter Future: A Study on Solar in U.S. Schools, a report from the Solar Foundation and SEIA. Adding solar is a no-brainer in sunny states like California, Arizona, and Hawaii, but it is also widely adopted in states with high electricity costs and progressive policies like New Jersey, Massachusetts, and Pennsylvania. The report details the many states where over 90 percent of schools would make money by adding solar.

Add storage to solar, and a school has many ways to make or save money. Consider the following scenario. Many schools face peak energy demand in the morning. Classrooms and offices are heated or cooled after being empty all night. Computers and equipment are turned on. Everyone arrives. For these peak hours, battery power can be used, since batteries were fully charged in the middle of the night, taking advantage of deep off-peak time-of-use (TOU) rates.

In the middle of the day, maximum sun power is captured. For example, when I visited U.C. Davis, a massive 16 MW ground-mounted solar array captured maximum sun power, using a single-axis system to tilting the solar panels to face the sun crossing the sky. By late afternoon, energy demand declines at most schools enabling batteries to be fully charged.

In many areas, peak utility demand is now hours like 5 to 9 in the evening. Schools in many states can sell power to utilities during these hours at premium rates, or at least participate in demand response programs where energy use is curtailed to zero thanks to intelligent energy storage.

Over 100 schools are so efficient and use so much solar energy that they are zero-net energy (ZNE article). In the future, thousands of schools will be ZNE. 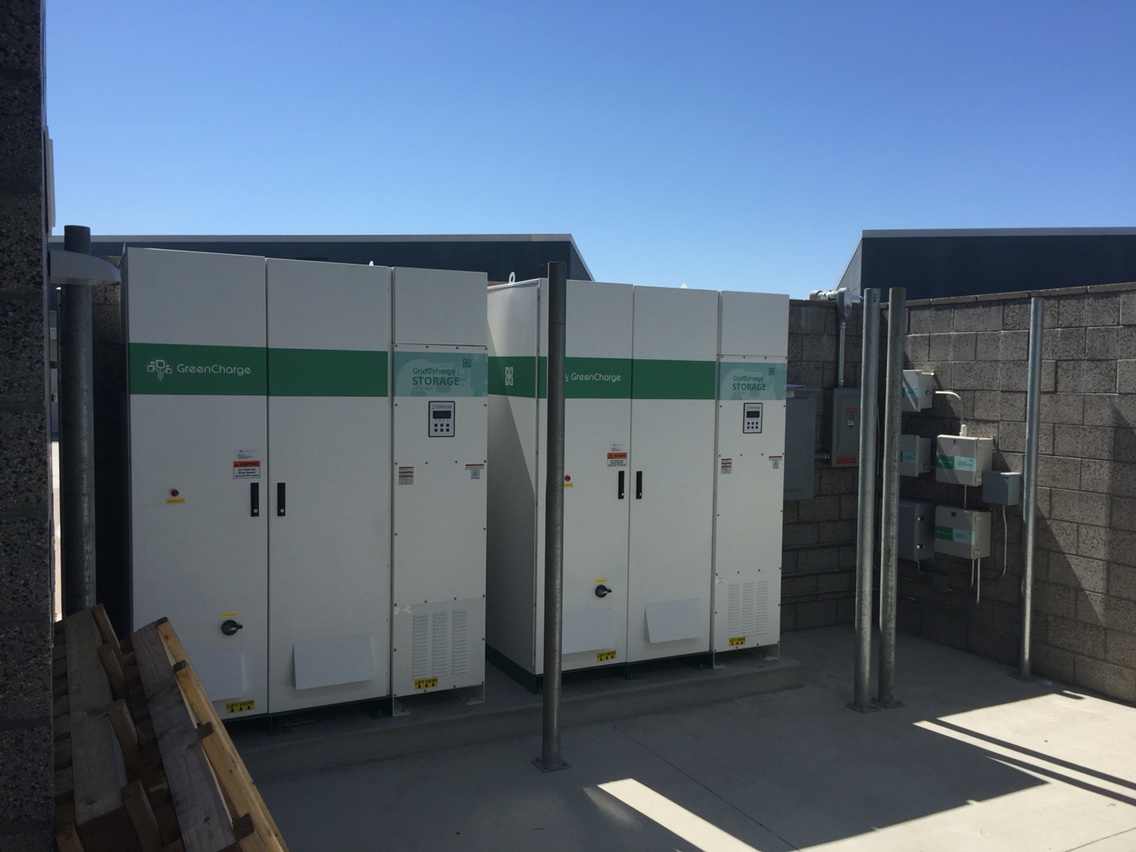 In San Diego County, California, Santana High School was the first of 14 schools in the Grossmont Union High School District to receive GridSynergy Storage. Two 250 kW/500 kWh Samsung lithium battery systems were installed on campus. Lithium batteries keep improving in energy density and falling costs. Schools win as Samsung aggressively competes with Panasonic, Tesla, LG Chem, BYD, and other energy giants. The Grossmont district will have 7.4 MWh of storage and $6.4 million in projected savings over the life of their Power Efficiency Agreement. Nearby Poway Unified School District, with over 40 K-12 schools, is installing an even larger system.

For utility, San Diego Gas and Electric, the energy storage at these two districts represents 15 MW that can be dispatched at peak hours as a virtual power plant. Major utilities in California are starting to reduce their use of natural gas (methane) peaker plants as the utilities turn to storage and energy aggregators such as Green Charge, Stem, and Advanced Microgrids. My SCE article.

As solar and batteries continue to drop in price and improve in efficiency a growing number of the 125,000 schools in the United States can take advantage of either solar or storage or both. Intelligent storage is helping schools and a wide range of government and commercial energy customers save with peak shaving, rate optimization, arbitrage and demand response. The economics are so powerful, that service providers like Green Charge are willing to install and maintain systems with no capital outlay, only requiring power purchase agreements, performance savings contracts, and other no-capex offerings.

By combining solar + storage + software + energy efficiency, schools may eventually save billions that can go to better classrooms, more teachers and aides, and better learning.