Scott Kolber is CEO of Roadify, a data platform and mobile application for transit information. Roadify makes it easy for people to find out when their bus, train, subway, etc is coming and why it’s late if it’s not there. Scott’s background is in marketing and business development for content and technology. Scott has a BA from the University of Virginia in International Relations.

Everyone in the world that takes public transportation does the same thing when they get to the station. They look down the track or street or across the river and wonder “what’s goin’ on?” Usually they see nothing and can’t find out anything.

There’s plenty of data, but it’s hard to find

It turns out there’s plenty of data available to answer the question but until recently it was difficult for riders to get this information in a way that’s relevant and meaningful.  The open data movement and widespread adoption of Google’s General Transit Feed Specification (GTFS) as a data standard has made it easier for developers to work with this data. Many have built apps to provide transit info but few have multi-mode/multi-market scale that combines the best available data from multiple sources. Scale also provides the foundation for a robust, multi-stream revenue model which is necessary to support on-going product development and data management.

Data comes from many sources, in many formats

Public transit information comes in many flavors but it’s easiest to think of it as quantitative (when will it be here?) and qualitative (why is there a delay?). Both types of data can be real time and come either from official sources (transit agencies) or from riders themselves via Twitter and direct user comments. For example, bus location data produced by a GPS tracking system is real time, official and quantitative.  A rider’s tweet describing a delay is real time, crowdsourced and qualitative.

Most transit agencies don’t have an easy way for their official service advisories to be displayed in Google Maps and disseminated to other outlets including their own websites, Facebook, Twitter and other apps. The result?  A hodgepodge of tweets, RSS feeds and other fragmented advisories that riders often don’t get because of their limited distribution. Roadify has solved this problem by building a portal that agencies can use to create official service advisories and alerts and stage them for easy dissemination to all these outlets. The portal allows agencies to enter all this data in once and send the appropriate file type to the right place, whether it’s GTFS-real time, HTML, tweets, Facebook posts or even as push notifications in mobile apps. Roadify developed this portal with Veolia Transportation for its NICE (Nassau County, New York) bus system and it is available to agencies anywhere. For free.

Most apps are too narrowly focused, need scale to be viable

Most apps are local—focused on one transport mode or system or built by a single transit agency with only that agency’s data. Those with scale are being acquired by big companies like Apple (Embark, Hopstop) and Google (Waze).  The best apps are those that provide riders with precisely the information they need at the “point of consumption”— when and where they need it, with minimal fuss and time spent for searching.  Delivering a great user experience that keeps users coming back requires the right balance of high quality data, compelling design and broad distribution.

Roadify takes a unique platform approach to providing high quality information and a compelling user experience. Roadify aggregates transit data from a myriad of sources and formats in more than fifty cities for distribution through multiple channels—mobile apps, web and on public signage. The result?  By presenting the most relevant information contextually by route, riders are able to find out when their ride will arrive based on vehicle positioning data along with insight into delays as reported by other riders on the spot and official agency advisories—all are real-time sources that together, tell the complete story. This allows riders to quickly understand what’s going on and clearly see their options.

The Favorites feature in the Roadify app allows riders to save their regular routes, stops and destinations in one place for easy access to the information they most regularly need. Riders can simply open the Roadify app and instantly see what they’re looking for.  It’s a one-tap/one-screen user experience and metrics show the Roadify iPhone app enjoys user retention rates nearly 4x the average of other navigation apps. 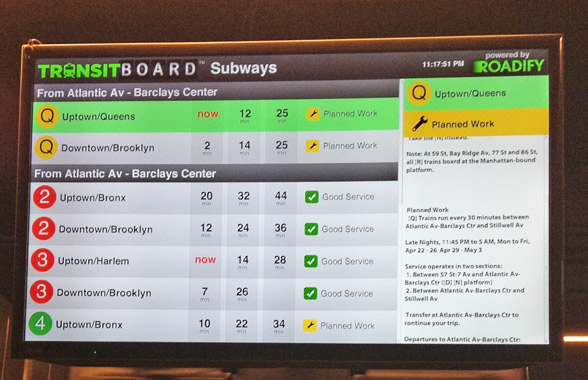 Ever notice that transit information is rarely displayed on public signage even at transit hubs and never at highly trafficked locations along transit routes? Roadify’s TransitBoard service addresses this issue. TransitBoard is a broadcast-ready feed of public transit arrivals and service advisories that can be displayed for any specific location on digital signs. Roadify is integrated into Cisco’s StadiumVision system and is live at Brooklyn’s Barclays Center where NYC subway, bus and Long Island Railroad information is broadcast on screens throughout the venue after events. An interactive version of TransitBoard can be seen in City 24 x 7 kiosks in downtown Manhattan, also using Cisco technology. These are the first places in New York City where real-time transit information is presented publicly to riders outside a major transit hub. TransitBoard is available to venues anywhere.

It’s really about answering a chronic, universal question—what’s goin’ on with my ride/when will it be here?  By aggregating multi-mode/multi-source data and presenting it with relevance and meaning we can give riders greater confidence in public transit. The result is increased ridership, less traffic congestion and cleaner, safer cities that are easier to get around. It’s a simple idea when you think about it—billions of dollars are invested in rolling stock and infrastructure but there’s a missing layer of information about how to use transit services. In the last few years open data, mobile applications and smartphones along with increasingly ubiquitous digital signage displays are making it possible to connect riders to the information they expect.