Richmond Bayway: Coming Soon to a Shoreline Near You!

Tom Leader is founder and principal of Tom Leader Studio, a landscape architecture practice in Berkeley, CA. For 35 years, Tom has grounded his practice in an authentic understanding and appreciation of culture, ecology, craftsmanship and design. Sincere in his exploration of the creative process, Tom has remained on the cutting edge of design innovation, his work widely recognized for excellence. Since founding Tom Leader Studio in 2001, Tom has sought to create “original, tangible experiences” of place in such award-winning projects as Railroad Park in Birmingham, Alabama, and RIVERFIRST in Minneapolis, Minnesota, and through his provocative site works and art installations. In 2012, Railroad Park received the Urban Land Institute Open Space Award and the project is also part of an upcoming PBS documentary titled “Saving the City”. A former partner at Peter Walker + Partners, Tom received a BA in landscape architecture from UC Berkeley and MLA from Harvard University Graduate School of Design. 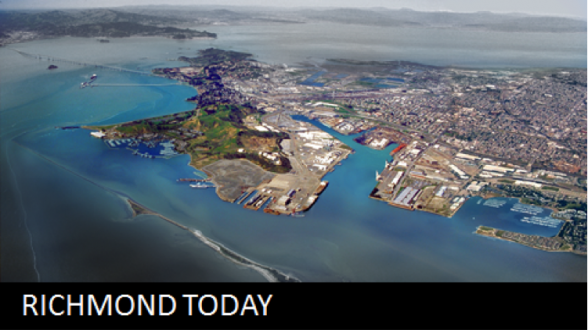 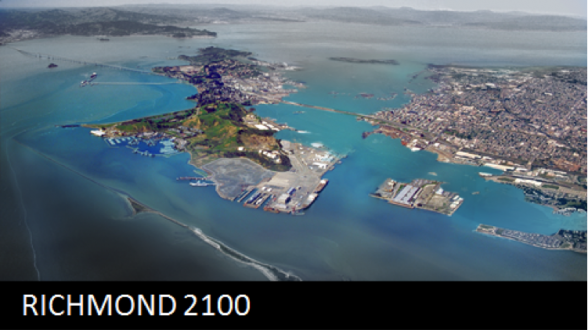 For lots of good reasons, Meeting of the Minds 2015 was held in what we consider the future urban core of the City of Richmond – Craneway Pavilion at Ford Point. This was the center of the inspiring World War Two Kaiser Shipyards, a National Historic sitting prominently along the San Francisco Bay shoreline. Today it has the potential to emerge as the urban cultural heart of a city that could finally seek to expand its presence to 32 miles of largely untapped, inaccessible industrial shoreline. The only problem is that Craneway Pavilion sits on one of the few shoreline sites not subject to both tidal flooding and seismic liquefaction in the coming years. Hard to build a new city center on that! 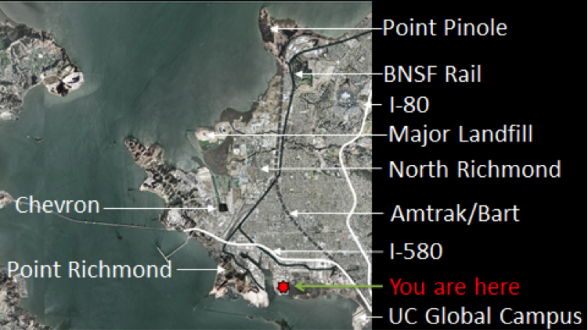 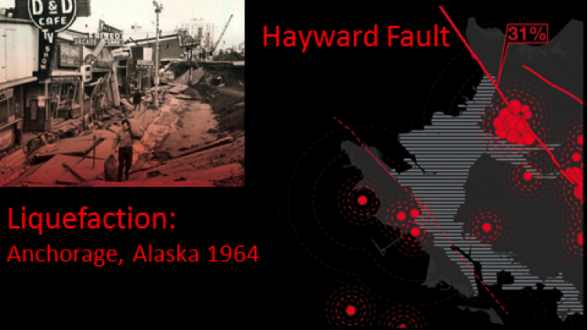 Richmond is a city that is getting a lot better at getting things done. But just like everywhere, pressing problems have to come first. When there is federal or state money to be had, when there is a major new player that might come to town, when things fall down or people are in immediate danger, that’s where immediate resources will obviously go. So how to propose solutions to incremental problems like sea level rise or instantaneous problems like earthquakes when they might not happen for years or even decades. And how would you plan for both simultaneously? Problem is…we have to. 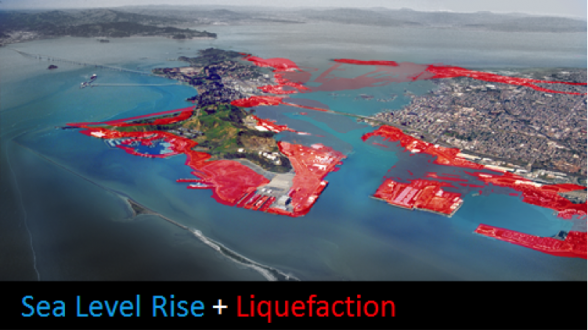 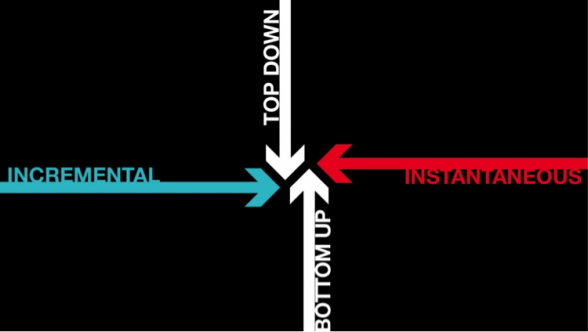 Sea level rise is becoming a hot topic all around the world – highlighted by efforts to recover from Hurricane Katrina in New Orleans and Hurricane Sandy in New York and New Jersey. It seems like it takes a catastrophe to sharpen our distractible focus on what’s happening incrementally. California has not yet had its catastrophe, which when it comes, may be more seismic than storm-related. If you look at the shoreline of San Francisco Bay you will find vast areas that used to be tidal marsh that were filled to create convenient flat expanses easily developed for railroads, highways, smokestack industry, cheap tilt-up construction of various description, and lots of parking and trucking facilities. These vast shoreline fills were not done to any great standard in terms of height above sea level or stability. So in the future we can expect major disruption to key production and infrastructure in many cities around the bay, not to mention around the entire Pacific Rim. 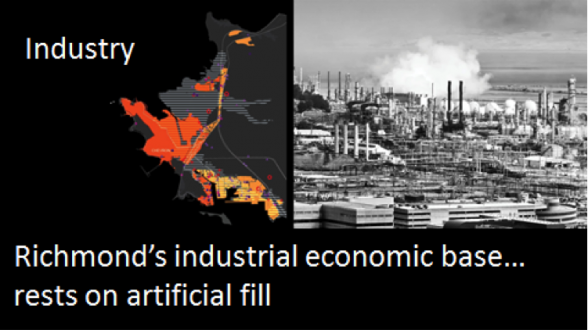 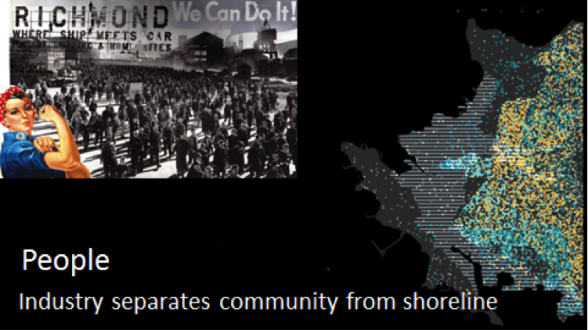 But it’s also happening at some unknowable point in the future. Cities are always focused on the problem at hand because they have limited resources. It’s hard to find the time to consider the situation in the year 2100 when other immediate problems are always more pressing. But it’s also more than that. If you survey the field of sea level rise initiatives, they tend to focus on defensive measures – some very high tech, some very soft and organic. But it’s about how to prevent something bad from happening. It’s a worthy goal…but in some ways hard to get excited about it – the fact of something not happening. 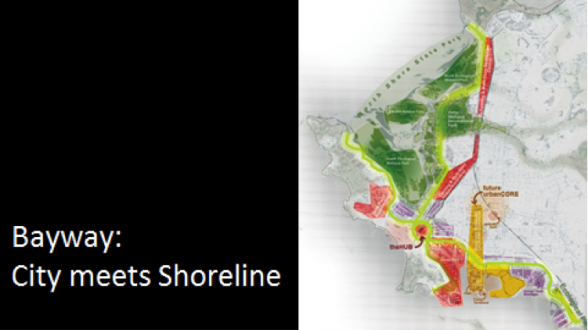 It was a key point raised by sustainability guru, Bill McDonough at the recent 50th birthday event of the BCDC (Bay Conservation and Development Commission) “Sink or Swim” last September. http://friendsofbcdc.org The question was, how can something positive and beneficial emerge from solutions to sea level rise…not to mention the other related issues mentioned above? And it’s fair to say there weren’t any obvious answers in that moment. Instead the discussion focused on what it would take to get people to pay attention, to devote resources and funding to a problem that hasn’t really happened yet. 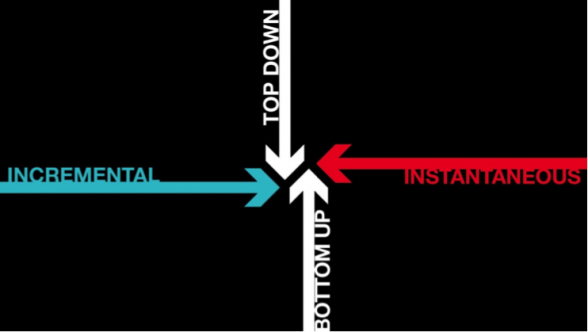 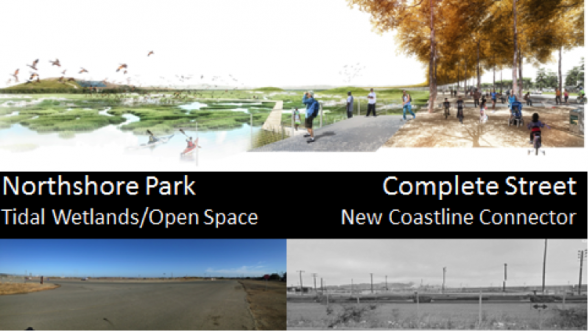 This problem of focus will continue until one of two things happens – either we wait for a catastrophe that does motivate us, or we start looking at a larger problem of how shoreline cities could actually plan a better future working with the fact of sea level rise, along with a host of other urban imperatives, rather than against them. That’s the premise of Richmond Bayway. The presentation at Meeting of the Minds summarized some of those risks and possibilities. 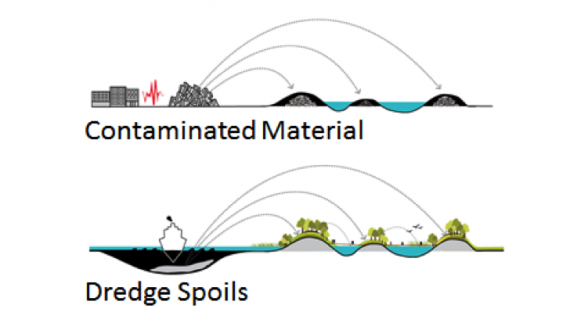 Richmond Bayway, what is it?

This is a proposal is to incrementally create of a new topography for the shoreline that uses the timeless medium of the earth itself to elevate and stabilize areas for urban growth on one hand, as well as vast new areas of shoreline open space and tidal marsh on the other. A new balance of cultural and natural systems. It’s about a chance to recover the shoreline environment Europeans found when the first came here, teeming with life and fertility, with flocks of birds so large they blackened the sky overhead. It’s also about creating a great urban threshold to the bay and the region right next door to the site of this year’s meeting. 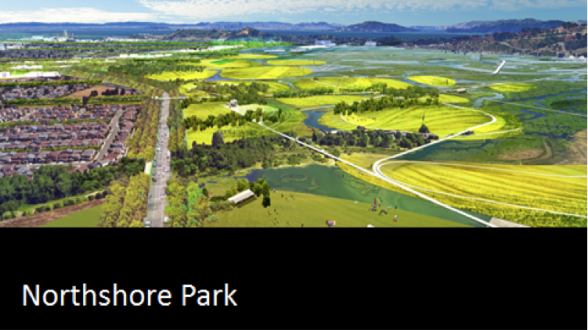 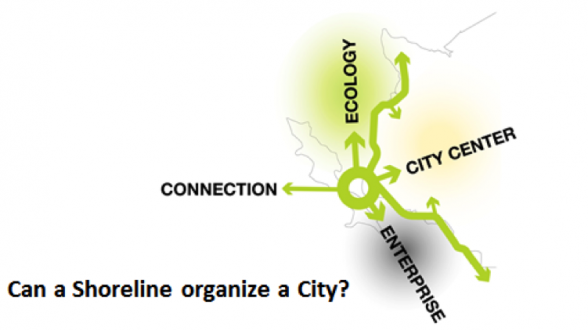 With much of its current tax base facing flooding and destabilization by 2100, Richmond needs to plan a new future on solid ground not only physically but economically. Smokestack industry along the shoreline, which has supported the city through the 20th century, will need to give way to business that is cleaner, greener, and denser in terms of footprint as well as jobs. The Bayway is conceived as a stable foundation for enterprise that takes best advantage of Richmond’s shoreline infrastructure – deep water port, interstate highways, freight and passenger rail. 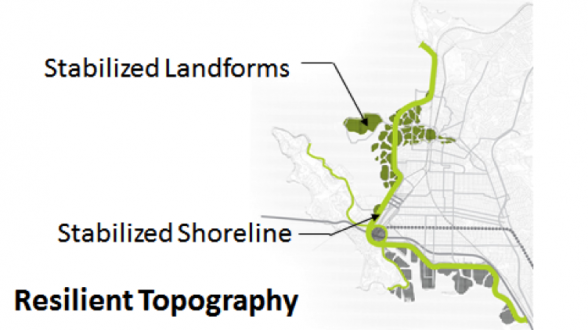 Once air, soil, and water pollution of smokestack industry like the colossal Chevron refinery have departed the scene, the shoreline will become healthier, more available for people to use and enjoy, and a vast amenity for both existing and new neighborhoods. Finally the marketing leverage of such a resource will become real. The Bayway proposes a new shoreline and open space connector that can organize all the enterprise as well as all the open space and ecological renewal that can expand and develop Richmond’s full potential. 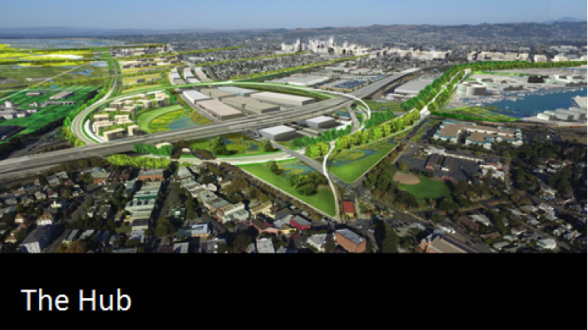 To learn the details about this story please visit the project publication at: http://tomleader.com/issue3D/richmondbayway/index.html

The Richmond Bayway presentation has stimulated new discussions and possibilities in the local press: http://bit.ly/1RgACPy New connections have been made with the San Francisco Estuary Institute and their recently announced seminal work, Bayland Goals: http://baylandsgoals.org/ Further, we look forward to the coming Resiliency Challenge, a design competition focused on the relation between sea level rise solutions and urban planning in the Bay Area: http://www.sf planning.org/index.aspx?page=4282 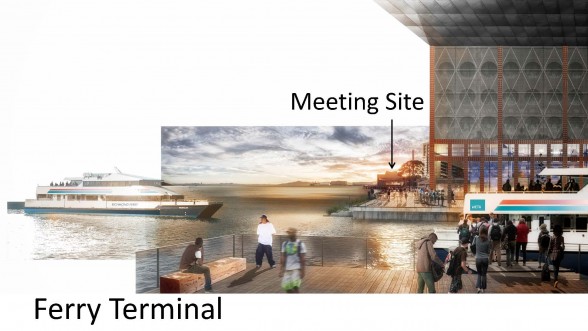