Bas Boorsma currently serves as Cisco’s Digitization leader in North Europe. In this role he orchestrates Cisco´s regional efforts that allow for the digitization of Cisco customer operations, partner operations and Cisco itself. Bas has a rich background as a City Digitization specialist. In that capacity he has managed a portfolio of smart city endeavors globally. Bas is the author of “A New Digital Deal” (September 2017).

What makes a community successful? That question has been around for a very long time and, as of recent, has become more complex in the digital age where communities are less clearly defined by geographical boundaries, or social structures that define where every stakeholder in a given community sits.

Many answers exist of course. Diversity is one. Among the most successful of cities have always been those that were ‘open,’ thriving on trade, populated by a rich and diverse array of people of all corners of the world and, as a result, in a permanent state of flux. Not all big cities, in the past or today, are of have been that open. But those that are typically prosper through a culture of cross fertilization, a healthy and thriving ecosystem enabled by a climate of ‘unexpected encounters’ of people, effecting how they act, trade, learn, work and grow – in other words: serendipity.

Serendipity is one of those buzz words one cannot get way from these days. The global social innovation scene is awash with the term, incubators of new business make enormous efforts to forge serendipity conducive environments, and so do smart work center environments, co-work centers – even restaurants. Networks are no longer mere optimizers of old ways of working and learning. Instead, networks are turning into the blueprint for a new culture.The idea being that a culture of serendipity can help us ‘design’ a process whereby ‘unexpected encounters’ happen, resulting in new business development, idea incubation, innovation, mutual understanding and wealth.

For serendipity to happen in a community, more than diversity is needed. Diversity is a starting point, but diversity can also exist in the shape of multiple silos with minimal exchange happening between these different silos. In other words, there are many communities that are very much diverse is terms of ethnic, linguistic, religious, professional or social strata, but that lack the success of a genuinely ‘open’ community as these strata operate in relative isolation. I recently overheard a smart city specialist mentioning San Francisco and Amsterdam as fine examples of relative open communities where ‘genuine’ diversity and exchange exist, compared against other big  cities (London was one he mentioned) which he labeled as more or less closed ecosystems. I’m not sure I agree with that judgment, yet it is certainly provides food for thought.

The issue with a term like serendipity is that they emerge and become main stream to communicate a desired state of being which we do not have today – like large organizations advertising a culture of collaboration (in such a case they very well may not have one) or the term ‘total quality management’ coined by the US automotive industry in the 1980s, a time when the quality of US cars were horrendous and failed to compete with Japanese cars. Why is everybody calling for serendipity so hard? Are we missing out on it that much? We may.

The question of what constitutes a successful community has become both more acute and complex as of recent. As humanity is  addressing a perfect storm of crises, the question has become acute. And as the world has become digital it has also become more complex. That complexity has resulted in more diversity, perhaps, but also in less serendipity – not more. 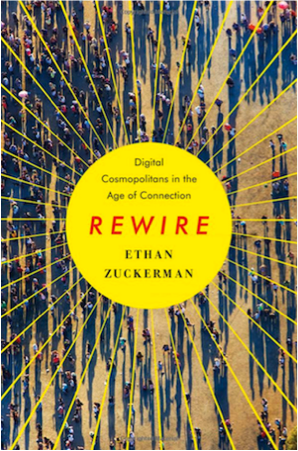 That is the line of argument in a new book titled “Rewire” by Ethan Zuckerman. The book does a relatively poor job at articulating a direction, let alone a real answer on how to ‘rewire,’ yet Zuckerman does an intriguing job in the opening chapters of articulating where today’s digital behavioral patterns and culture may fail to leverage our so-called flat world.

Zuckerman reasoning is that where one would expect global connectivity and an almost infinite amount of data, services and online exchange to result in more serendipity and genuine exchange, we often end up with less. Examples appear abound. Reading a classic newspaper means to accept other people have curated a set of news items for you and put their minds at bringing that news, analyzing it, possibly enhanced by expert opinion.

There is a high degree of serendipity, of ‘organized coincidence’ in knowledge sharing at the heart of that simple act. By simply going through the pages of a classic newspaper, you’ll take in news and expert opinion you might never have expected to take in before you commenced reading the paper.

Our online news gathering behavior can at times be more limiting. As we wade through an ocean of online information, we search and find what we know, stick to particular areas of interest and do not easily venture out groups of peers that are familiar. We may get offered more data and information, but possibly harvest less serendipitous insights, exchange and know-how – and a siloed view of the world as a consequence. Facebook may allow you to stay in touch with people at the other side of the world, but it may limit you to seeing the world as one populated by that one group of friends and their likes you may acquire. And an outspoken Republican or Democrat in the USA can be expected to link up with—and acquire her or his news from—platforms that carry their political flavor – a fact that has been well researched.

Too negative a view? Almost certainly. Zuckerman’s narrative is flawed for various reasons. Zuckerman understates the degree to which networks and the services they enable have become essential to communities and their residents, governments and institutes. Network technologies are less a mere set of solutions that get acquired to optimize existing communications and functions within a given community, and more an embedded feature of the community’s communications and functions to the point entire communities would not be able to exist without them.

Zuckerman argues that much of the ‘networked world’ vision is hardly a reality. Zuckerman:

This vision of a globally connected, informed and cosmopolitan world […] is part of a narrative offered by the individuals and companies that build the internet.

That is not entirely untrue: the global IT industry’s narratives have at times, at a minimum, run miles ahead of societal realities. Zuckerman is missing the point however. To quote a fresh paper published by and for the City of Sydney (We the City—Martin Stewart-Weeks and Tim Williams with the Committee for Sydney):

The point is to neither downplay nor demonize the impact of technology but to “urbanize” its impact, making sure that its power and potential intersects with the essential humanity of cities and their communities. The real power of technology is unleashed only if it fits the contours of the way people and cities actually work, rather than simply providing “dumb” infrastructure.

Those that have been involved in building – or merely observed—the emerging patterns of networked learning and work easily agree in taking the counter argument a step further: networks are no longer mere optimizers of old ways of working and learning. Instead, networks are turning into the blueprint for a new culture. A culture that is inclusive of all the unwritten rules and factors that determine not only how, where, when and with whom we work or learn but also how we do that most effectively, competitively and socially most conducive. In short, we are not so much in need to rewire. As a network inspired culture of human conduct emerges, we are already ‘upwiring’ ourselves, with our online behavior evolving.

“Rewire” will not make it to the shelve of best books I ever read. Zuckerman fails to provide the reader with a distinct vision of what the world should be doing, what ‘rewiring’ constitutes, and his call to action remains vague. Still the core issues he raises in his well-written opening chapters are not entirely off the mark. We have in many ways become less serendipitous, not more. Digital cosmopolitans are less prevalent than we tend to think and many of the network powered tools that we use and populate—learning and collaboration tools, online government platforms and services, community portals, wikis, social media and ‘big data’ interfaces – all should evolve in a direction that is inclusive, diverse, serendipity conducive and citizen centric. A network inspired culture that allows us to ‘upwire’ is emerging indeed but that process takes time. All stakeholders involved, the IT industry included, should make ‘upwiring’ part of its mission.