The Puyallup Watershed Initiative: A New Approach to Community-Centered Change

Henry Izumizaki is the Strategy Director for The Russell Family Foundation. He promotes creative thinking and encourages risk-taking among his colleagues across all areas of the Foundation: grassroots leadership, environmental sustainability, and global peace.

In 1873, just eight years after its founding, the city of Tacoma was chosen as the terminus for Northern Pacific Railroad’s transcontinental route. Upon winning this coveted prize, the leaders of the day dubbed Tacoma the “City of Destiny” because, they believed, railroad commerce would bring prosperity and prestige to the region.

It was a clever marketing strategy for the time. After all, they knew Tacoma would need more services and the people to provide them. A nickname like “City of Destiny” signaled confidence and encouraged development. At the same time, however, it revealed a dependence on external resources for success.

Fast forward to 2016. After many decades of highs and lows, Tacoma and the surrounding region is growing again. But today the circumstances are vastly different.

On the upside, there is solid infrastructure for business, leisure, health and education. There are mature industries and skilled labor. There is a growing entrepreneurial community. And, perhaps most significantly, there is an ever-more diverse population.

On the downside, there is an erosion of democracy. An imbalance of power, resources and opportunity has built up over time; and with it has come widespread fallout in the form of pollution, haphazard development, and social fragmentation. As a whole, these conditions have strained the essential underpinnings for a thriving community: mutual trust and respect.

In response to these realities, The Russell Family Foundation launched its most ambitious undertaking ever: the creation of a community-led, community-owned movement dedicated to improving social and environmental conditions throughout the Puyallup River watershed – a vast region that spans from the peaks of Mt. Rainier National Park through forests, farmland and towns, down to the City of Tacoma and the shores of Puget Sound. 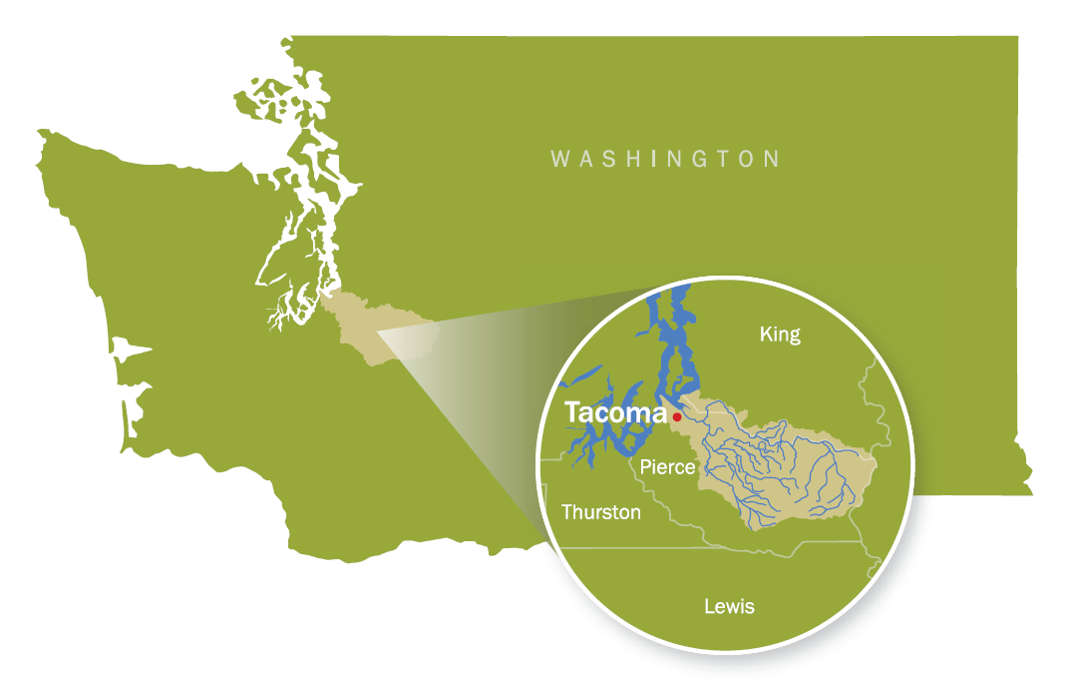 We call it the Puyallup Watershed Initiative or PWI for short.

Going in, we had a big vision but little framework. Our aim was to bring three “E’s” – environment, economics and equity –in balance in order to support a healthy, just and resilient community for all. We knew it would be a long-term commitment to build structure and capacity for such an unprecedented undertaking. Starting in 2012, we gave ourselves 10 years to evolve from a foundation-run initiative, to a sustainable, community-owned enterprise.

The Puyallup Watershed includes 1,000 square miles, 316,000+ people, 2 Tribal nations, 17 cities and towns, pristine forests, rich agricultural lands and one of the busiest ports on the West Coast. In recent years, the attractiveness of the region has led to significant growth and urbanization, which offers many benefits. But these forces come with significant drawbacks too.

For example, the sale and subdivision of land can fracture wildlife habitat, threaten working forests and take local farmlands out of production. Polluted stormwater runoff, which is already the number #1 pollution source in Puget Sound, will worsen. Additionally, the gap between affluent and underserved communities will likely widen, resulting in greater social and economic inequities.

Recognizing these risks, The Russell Family Foundation decided to take action. The PWI was an extension of its previous investments in environmental education, grassroots leadership and water quality. However, the overarching objective was to strengthen the connection between people and the places where they live, work and play.

That’s why we settled on a unique approach that emphasized a shared sense of place.

In 2012, we announced the start of the PWI by making a 10-year funding commitment at $1 million per year. However, we intentionally left the long-term goals for the initiative open-ended and invited community partners to define their own agenda. This decision marked a departure from traditional grantmaking models, which tend to focus on narrowly defined challenges with the support of well-established partners. Instead, the PWI would look to the community for priorities that inspire far-reaching support.

This allowed participants to look beyond zip codes and jurisdictions. It helped them redefine what a “local” problem was and how a local response might look. It gave them the opportunity to approach their work from the geographic perspective of “the watershed.” In the process, they created space to pinpoint problems and opportunities, which is a cornerstone of community democracy 1.

Since launch, progress has been steady and significant. The PWI is building a broad coalition of businesses, nonprofits, government agencies and individuals to focus on social and environmental concerns that impact the region today and well into the future. 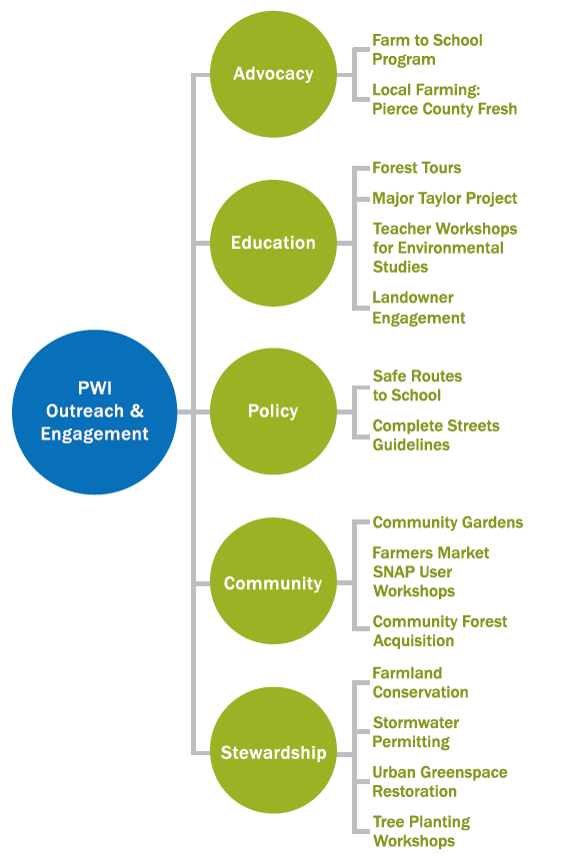 The PWI is different by design. Instead of identifying problems and remedies from the top down, it brings together diverse viewpoints to build solutions from the bottom up. Instead of concentrating on a few short-term projects, our members take on broad, systemic challenges.

Participants in the PWI form working groups called Communities of Interest (COI). These are self-organized 2 teams of individuals, government agencies, nonprofits and professional organizations. Together, they focus on important issues affecting all parts of the watershed, such as transportation, local food, natural resources, environmental stewardship, and social justice.

The Communities of Interest are the engines of change. Their work is guided by a 20-year vision, 10-year strategic plan and annual work plans. Each team conducts a variety of outreach and engagement activities that run the gamut from local community gardens to public policy reform. But all efforts map back to the guiding principle of increasing community stewardship with an emphasis on equity and inclusion.

The collective nature of the PWI is what sets it apart. It is a grassroots effort grounded in the belief that the people who live and work in a place understand it better than anyone else does. And these people, given the proper support and resources, will come up with the best ideas to address persistent challenges and promising opportunities. COI participation is open to anyone who wishes to join, irrespective of their location. New COIs can be established if they can demonstrate sustained interest and support from the watershed community at large. 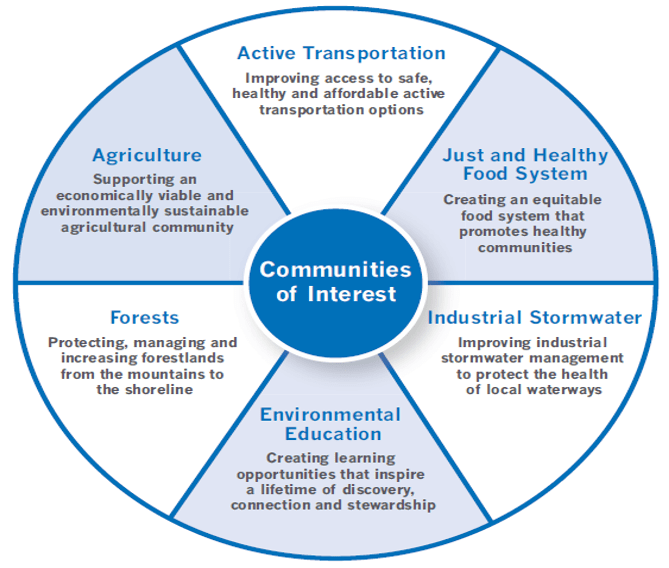 The PWI was conceived to grow and evolve based on collective experience and, ultimately, to become a self-sustaining entity.

In early 2016, work began on designing a community-owned and centralized governance structure that will provide operational support services, such as fundraising, communications and coordination. Likewise, it will assume the power and authority over The Russell Family Foundation’s grantmaking, which is currently about $1.3 million annually. This future governing body is intended to become fully independent before the end of the Foundation’s 10-year commitment.

Meanwhile, the COIs are mobilizing to secure ongoing support. Each team is building the skills and savvy required for successful grant proposals. On one level, they are focusing on potential funders within their spheres of interest. On another, they are building relationships with organizations that seek similar outcomes. For example, the Active Transportation COI has received grants from several public health entities because more people who take up bike riding, and other forms of human-powered transit, the healthier the community will be.

Another way that COIs are generating support is by demonstrating their value across a range of constituents. Members of the Agriculture COI, for instance, provide opportunities for disenfranchised and overlooked segments of society. Mother Earth Farm, a small organic farm in Pierce County, works with incarcerated women to supply produce for local food banks. It is the only farm of its kind in the nation. The Veterans Farm at Orting (also in Pierce County) provides Eco-therapy opportunities and self-directed agricultural learning experiences, which help individuals transition from military to civilian life.

Such pioneering efforts need champions with similar passions. Funding is one way to offer support, but sharing professional expertise and networks can be just as impactful. To learn more on how you can contribute, visit www.pwi.org.

We’re still in the early phases of this far-reaching initiative, but we expect to see tangible outcomes reflected in land use decisions, improved water quality, thoughtful public policies, and greater public stewardship of green and urban spaces. Above all, we aim to bring people together to tackle issues that once seemed beyond reach.

The work of the PWI is far-reaching and may sound risky to some because there are many unknown factors to overcome. Yet those are the very reasons why community-centered change is so important. After all, if there were simply technical solutions to the challenges we face, then they would have been solved long ago.