Pittsburgh: From Steel to Sustainable

From Mount  Washington, I overlooked the beautiful city of Pittsburgh, Pennsylvania, framed by a confluence of rivers. In 1760, the coal industry was born here. Coal enabled Pittsburgh to lead the nation in steel manufacturing and that in turn led to Pittsburgh becoming an industrial giant. Andrew Carnegie built the greatest steel company of the world. At times, Pittsburgh supplied half of our nation’s steel.

At one point, Pittsburgh had more corporate headquarters than any other US city, except New York and Chicago. From this view one could argue that coal has been a great enabler of modern life, jobs, and economic development.

However the cost has been high in health damage, water pollution, and heat-trapping greenhouse gases. As the skies darkened with pollution and the rivers polluted, many corporate headquarters left Pittsburgh, and employment shrank. 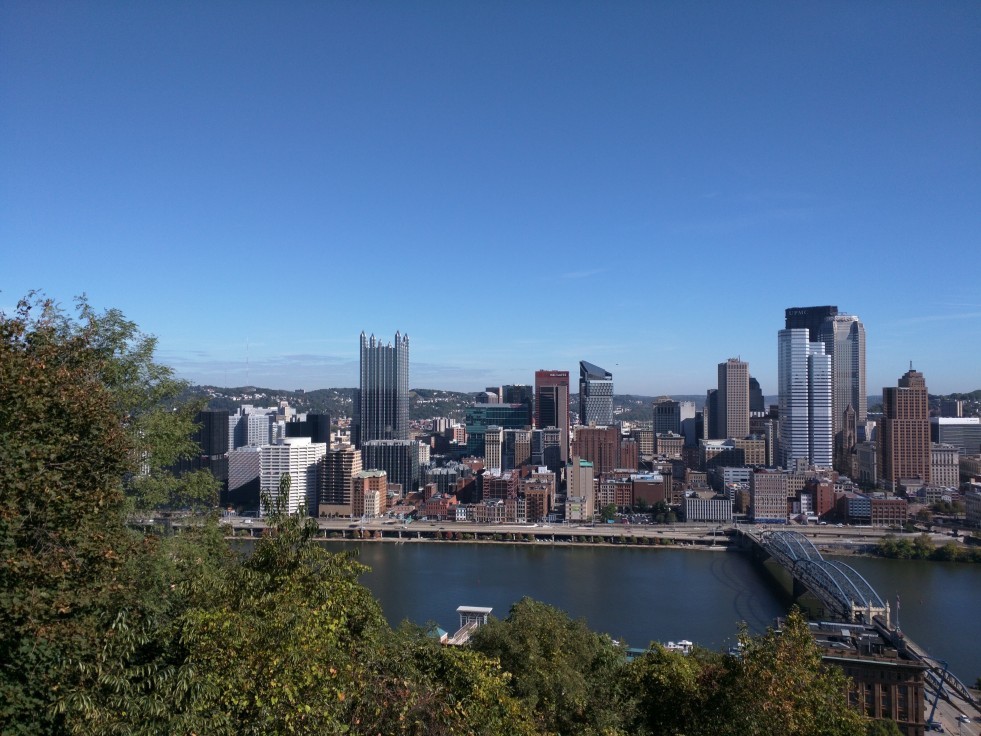 From Coal to Fracking

Coal power now generates only 26 percent of Pennsylvania’s total electricity. Most of the state’s electricity is from nuclear and natural gas (methane) power plants. Nuclear is expensive and famous for the Three Mile Island meltdown disaster. Methane emissions are pushing our climate to extremes. Major studies have shown a three to ten percent emission of methane, from fracking to pipeline to use. Methane traps 108 times the heat of carbon dioxide over its 12-year average life in the atmosphere.

The Marcellus Shale is a massive methane deposit that spans over 100,000 square miles in Pennsylvania, West Virginia, Ohio and New York. In Pennsylvania, over ten thousand wells have been drilled, producing billions of dollars in revenues from the sale of energy. Drilling results in ponds of produced contaminated water. Many of these ponds are near aquifers that people use for wells and drinking water. Citizens have filed over 4,000 drinking water complaints with the Pennsylvania Attorney General.

While Pittsburgh’s air and water are cleaner than decades ago, the city is challenged to make them clean and healthy.

On June 1, 2017, President Trump withdrew the US from the Paris Accord, a non-binding climate agreement with 195 nations. Trump stated that the agreement blocked development of clean coal. That is not true. What is true is that the industry has promoted “clean coal” for one hundred years without delivering, costing US taxpayers tens of billions.

Trump said, “I was elected to represent the citizens of Pittsburgh, not Paris.”

Pittsburgh Mayor William Peduto was quick to respond and stated, “President Trump’s decision is disastrous for our planet, for cities such as Pittsburgh, to the commitments the United States made to the rest of the world, and to our responsibility to save the globe for future generations.”

The mayor went on to cite Pittsburgh’s progress in clean jobs, health, and sustainability: “We are improving the efficiency of buildings; using smart infrastructure to reduce emissions; supporting new mobility solutions like bike share, bus rapid transit, and shared rides to reduce our reliance on personal automobiles; and has world class innovation happening by the likes of the University of Pittsburgh, Carnegie Mellon University, and many industry partners.”

Pittsburgh is one of 2,500 US cities and corporate members of We Are Still In, a coalition committed to the Paris Accord. The city government’s 2030 goals for its buildings fleet and infrastructure include:

My wife and I joined the locals walking along riverfronts, relaxing in parks, and socializing in neighborhoods. Food is increasingly local and sustainable. Pittsburgh is home to the largest urban farm in America.

Pittsburgh only gets a transit score of 54 on walkscore.com, which is understandable given its unique geography of rivers, hills, and dispersed neighborhoods. When I rode their buses, drivers sometimes went off-route to circumvent gridlock. More nimble rideshare cars and vans that could dynamically reroute would meet many needs, cut gridlock, and reduce emissions. That is exactly what is starting to happen.

With outstanding engineering and science programs at Carnegie Mellon and the University of Pittsburgh, the city is thriving with advances in robotics, software, and autonomous vehicles. Uber has over 100 engineers and tech wizards at its advanced Technologies Center in Pittsburgh.

For months, some Uber members were surprised to get their ride from a self-driving car. Yes, a reassuring engineer sat behind the driving wheel, but most of the time the car drove itself. Not an easy feat in a city with 446 bridges crossing its rivers. Encouraged by the success, Uber has ordered 24,000 self-driving Volvo XC90 SUVs for large-scale global deployment starting next year.

Pittsburgh is one of 20 finalists, from 238 bidders, as the city for Amazon’s second headquarters (HQ2). Amazon promises to invest more than $5 billion and hire up to 50,000 at HQ2. If Seattle provides a lesson, HQ2 would likely generate an equal number of added jobs in construction, housing, retail, healthcare, and education for the workers and their families.

Phipps Conservatory and Botanical Gardens best represents the transition of Pittsburgh. My wife and I spent hours exploring 23 distinct gardens, some with orchids, and some with brilliant arrangements combining flowers with the art of master glass blower Chihuly. The 15 acres was once a coal brownfield and now a Living Campus.

Joining other environmental journalists, I toured buildings and gardens with Jason Wirick, Director of Facilities and Sustainability. He explained how the complex is designed to only use a fraction of the energy of similar complexes. Using passive design, with no air conditioner or gas heating, he showed how the Tropical Forest Conservatory keeps plants warm when the outside is snowing and cool when the summer heat blazes.

He walked us through the specifics of the Center for Sustainable Landscapes, which not only meets all its energy needs with 196 kW of solar power, ground-source heat exchange, and 10kW of wind power. The building goes beyond net-zero energy to generate excess electricity. It is Living Building Challenge Certified. The building is smart, using sensors and IoT, to control natural daylighting and LED lighting. Enough extra electricity is generated to charge electric vehicles.

Phipps keeps all plants, visitors, and facilities warm in the winter and cool in the summer with zero coal power, zero fracked methane. Innovation continues, with Phipps now participating in utility demand response and plans to add Pika batteries for backup storage.

After the journalist tour, my wife and I lingered for hours in the beautiful gardens and feasted in the Green Cafe. 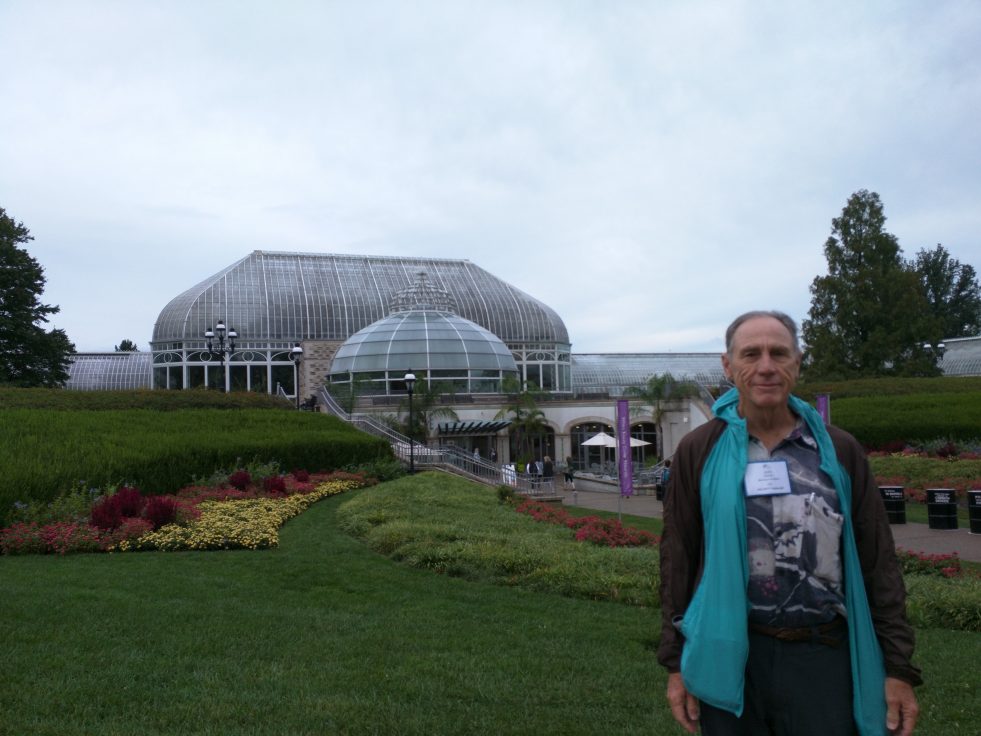 Pittsburgh is a valuable model of a city in transformation from polluted to pristine, from coal to clean energy, and from fading industrial to a diverse economy for all that embraces the future.